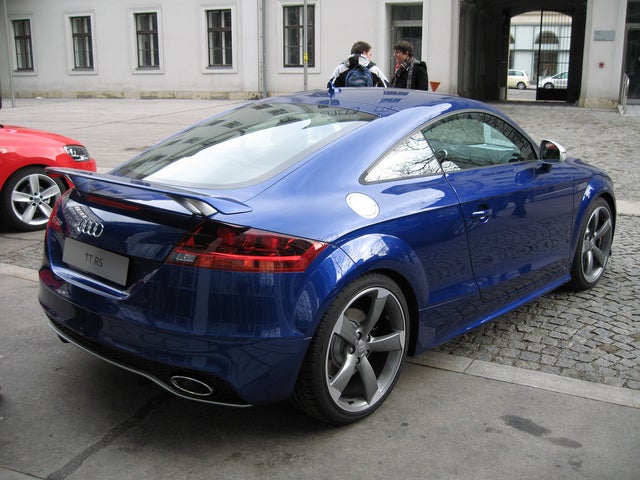 Classy and quick, nimble and semi-potent, the 2011 Audi TT walks a fine line between posh commuter car and luxury sports coupe – then crosses it. This little gem of an automobile is available in either the commuter-friendly TT 2.0T trim level or in the sport-minded TTS S2.0T version, and each can be delivered as either a four-passenger hatchback or a two-seat roadster sporting a soft convertible top. Both trims can also be packed with available options to bring either configuration from the base Premium Plus level to the plusher Prestige level. Meantime, no matter the configuration, the TT lineup sports a turbocharged inline four-cylinder engine (I4) and full-time all-wheel-drive (AWD) quattro safety and traction. Boasting 24.7 cubic feet of cargo capacity with the rear seats folded, the Hatchback may be the more practical of the two variations, beating the roadster’s trunk capacity by some 16 cubic feet. The drop-top, however, should appeal to those who want an exhilarating drive in the country aboard a spiffy screamer that can flat get up and go while handling curves and straightaways with equal aplomb. New stuff for 2011 includes added power for the more staid TT and a standard Sport button in the more athletic TTS, allowing driver-selectable adjustment of steering, suspension, and even engine note. Additionally, standard leather upholstery and a restyled front grille grace both trims for 2011, with the resulting looks beginning to resemble the TT's R8 cousins.

Rivals, meanwhile, include, among others, BMW’s 1 Series and 3 Series, as well as its Z4 Roadster, and also Infiniti’s superlative G coupe and convertible. Audi’s own A5 coupe and roadster are also worthy alternatives with a dash of added room and practicality. Pricing on the 2011 TT begins at around $38,300 for the 2.0T hatchback, with the TTS S2.0T hatchback starting at $47,000. Drop-tops run about $3,000 higher in both trims.

Powering the 2011 Audi TT is a turbocharged 2.0-liter I4 engine that mates with Audi’s highly touted S tronic six-speed dual-clutch auto-manual transmission to pound out 211 hp and 258 lb-ft of torque. With variable valve timing, the four-banger gets an estimated 22/31 mpg, while the six-speed pseudo stick-shift boasts a brake-hill-holder. That same drivetrain graces the sporty TTS versions but adds some 54 hp to bring it to 265 hp total. Meantime, a mechanical, center-mounted limited-slip differential manages the AWD system across the lineup.

Optional packages for the TT and TTS begin with the Prestige Package, starring Audi’s MMI navigation and a 6.5-inch LCD display, Nappa leather upholstery and cabin accents, 255-watt Bose premium audio components, including 12 speakers with subwoofer and iPod capability (or 6-CD changer), as well as heated front seats and Audi's Parking System. The S-Line Package includes 19-inch twin-spoke design wheels, S-Line badging and sport seats, headlight washers, and 3-spoke steering wheel with mounted paddle shifters. Most of the packaged options, it should be noted, are also available as standalone items. Finally, the 2011 TT can be equipped with the available Audi Magnetic Ride Suspension with upgraded shock absorbers and driver-selectable modes for Sport or Normal driving conditions that’s standard in the TTS.

Owners of the 2010 TT were a tad disappointed with its lack of head-snapping acceleration, and apparently Audi was paying attention in tweaking the 2011 four-banger with an additional 11 hp and 51 lb-ft of torque. Some minor transmission glitches and a few complaints of poor resale value, however, were also mentioned by owners of the 2010 version. Those who own the TTS want a few more ponies under the hood and a little more cabin storage, while some disappointing mileage figures also brought a few boos. On the positive side, however, styling, handling, standard AWD, an over-the-top number of standard creature comforts, and the TTS’s selectable handling program has most owners well satisfied with this classy performer, whether in hatchback or rag-top garb.

Users ranked 2011 Audi TT against other cars which they drove/owned. Each ranking was based on 9 categories. Here is the summary of top rankings.

There’s no power in my drivers door (window won’t go down, petrol cap won’t open & the door won’t lock) I had a diagnostic test done but it wouldn’t connect to the module, he said the that contro...

98 views with 2 answers (last answer about a year ago)