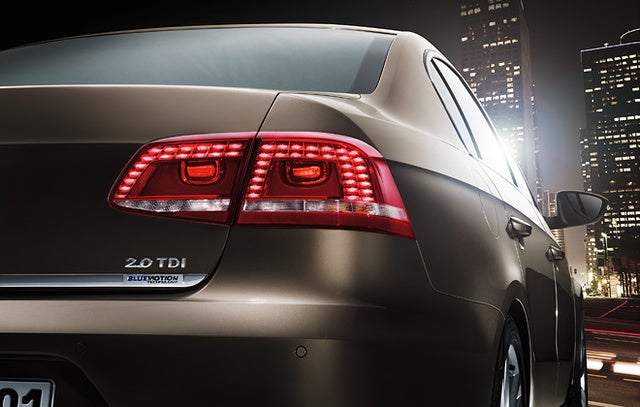 The 2010 Volkswagen Passat brings European sophistication and style to the midsize class, offering a novel transmission and competent driving dynamics.

A high base price and the lack of a V6 engine option mean the 2010 Passat presents less of a value proposition than some competitors.

Featuring distinguished styling and continental driving dynamics, the 2010 Volkswagen Passat continues the German manufacturer’s tradition of providing a classy alternative to more mainstream cars like the Honda Accord. The optional wagon variant, a rarity in today’s marketplace, has plenty of space and represents a compelling alternative to large SUVs. While the Passat features a healthy level of standard equipment, its elevated price and lack of an optional six-cylinder engine mean buyers looking for value might shop elsewhere.

Available as either a four-door sedan or five-door wagon, Volkswagen graces the Passat with a nifty new gearbox for 2010 and tweaks the interior design a bit. When introduced in 2006 the current-generation Passat offered an available V6 engine and a laundry list of high-end options. But last year VW expanded the Passat range by adding the up-level CC model, which features different styling and a higher pricetag. With the CC filling out the top of the range, the regular Passat was stripped of its V6 engine and some big-ticket options.

Now featuring a turbocharged four-cylinder as the sole engine, the 2010 Passat still possesses above-average performance for its class. Much of the credit goes to the excellent twin-clutch DSG gearbox, which features six speeds and has no power-robbing torque converter. Handling remains sprightly, and the Passat exudes a distinctly European vibe in the way it goes about its business. All Passats feature front-wheel drive, as VW’s lauded 4MOTION AWD is now reserved for the CC model.

Still sized just right for the midsize class, the 2010 Passat features plenty of room, especially in the wagon body style. Seating for five is provided, with plenty of legroom front and rear. The up-market interior benefits from the sort of high-quality materials and seamless assembly that have earned VW countless accolades. Standard features are comprehensive (given the price, they’d better be) and include a power sunroof, a new 8-speaker CD stereo with Bluetooth, leatherette upholstery, and even an air-conditioned storage compartment to keep beverages cool.

Overall the 2010 Passat scores well in terms of style and quality; it definitely feels like a step up from an Accord or Camry. Its spunky acceleration and confident handling, plus the high-tech transmission, make for a downright sporty driving experience. Yet the fuel efficiency of the four-cylinder engine and the comforting blanket of standard safety features make the Passat a well-rounded choice, too.

Perhaps the only thing the 2010 Passat doesn’t offer is tremendous value; its sticker price approaches $30,000. Thus the Passat finds itself in limbo; value-driven buyers will likely choose a more mainstream product, while those seduced by the European pizzazz that VW offers will probably step up to the slightly more expensive CC.

For 2010 all Passats share the same 2.0-liter turbocharged engine. This DOHC inline four-cylinder (I4) generates a respectable 200 hp and 207 lb-ft of torque. The small four revs willingly, makes pleasant noises, and idles smoothly. With only 3,300 pounds to move along (VW engineers did an excellent job keeping the weight down), the Passat’s turbo motor provides lively acceleration; 0-60-mph comes up in 7.4 seconds. Fuel economy is very good; the Passat gets 22 mpg in the city and 31 on the highway.

Volkswagen is able to strike such a good balance between performance and efficiency largely due to the Passat’s new DSG transmission. This unique setup uses a six-speed manual transmission with two computer-controlled clutches and electro-hydraulic shifting. While the driving experience may take a bit of getting used to (much like the CVT transmissions coming into vogue), no special skills are required - just drive it like an automatic. The gearbox delivers rapid, smooth shifts and can be controlled manually via steering-wheel-mounted buttons if the driver desires.

In the European tradition much attention has been lavished on the 2010 Passat’s handling characteristics. Its four-wheel independent suspension features MacPhearson struts in front and a multi-link setup in back. The responsive chassis has a balanced feel with plenty of grip that transitions into predictable understeer at the limit. While the electric power steering doesn’t give much feedback, the wheel is lightly weighted and turn-in is snappy. Tracking stability on the highway is first-rate; the Passat features an autobahn-bred sense of security as the speed increases.

Confident handling doesn’t come at the expense of the Passat’s ride quality, at least with the standard tires. Bumps and other road imperfections are dealt with admirably; even with the firm damping, the ride is never uncomfortable. The low-profile tires that come with the newly available 18-inch wheels do impart a harsher edge to the ride, and buyers seeking comfort would be advised to avoid them. The Passat features four-wheel disc brakes (vented in front) with standard ABS control and an anti-moisture pad wiping system. Pedal feel is good, and stops shorter than 130 feet from 60 mph have been measured.

Riding on a 106-inch wheelbase, the 2010 Passat features more than 96 cubic feet of passenger volume. The front seats offer plenty of leg and elbow room, and standard 12-way power adjustment makes finding a comfortable driving position a snap. Rear passengers are treated to almost 38 inches of legroom, and headroom is sufficient for 6-footers, something the CC model can’t claim. Passat sedans have 14.2 cubic feet of trunk space, while wagons offer nearly 36 cubic feet of cargo capacity under the hatch, increasing to 61 cubic feet with the rear seats folded.

The Passat’s interior design is clean and modern with an almost art-deco feel. The low beltline and abundance of glass provide a stellar view out, though rear visibility is compromised by the fat C pillars. Fit and finish are VW specialties, and the Passat doesn’t disappoint, with razor-thin panel gaps and top-quality materials. Metallic trim is used liberally in the cabin and lends an expensive, sporty feel. The comfortable, supportive seats are upholstered in convincing ersatz leather and feature standard power adjustment for the driver.

Volkswagen has loaded the Passat with standard comfort and convenience features; navigation and 18-inch wheels are the only notable options. The generous level of equipment takes some of the sting out of the Passat’s high price and includes a power sunroof, remote keyless entry, cruise control, and heated seats. Tunes are provided by an excellent 8-speaker stereo with CD, satellite radio, and Bluetooth phone connectivity. An optional iPod upgrade allows full integrated control of any Apple MP3 player.

The 2010 Passat has six standard airbags (front, front side, and curtain) with rear side bags optional. Its antilock brakes feature electronic brakeforce distribution and pedal assist. Standard traction and stability control provide a measure of security on slick roads. In federal testing the 2010 Passat earned four stars for frontal impact protection and five stars for side impact protection. The Insurance Institute for Highway Safety rated the Passat as Good, placing it in the safest category of vehicles tested.

Passat owners (like VW owners in general) seem very passionate about their cars. Multiple reviews were effusive in their praise for the car's sprightly handling and quick acceleration, though some power junkies wanted more oomph. Quite a few buyers extolled the virtues of Passat wagon ownership and posed the question of why anyone would prefer a bulky SUV. Complaints center on the price and the aforementioned wish for more power.

What's your take on the 2010 Volkswagen Passat?

Whiteveedub The 2010 Passat is an amazing car. After having owned 2 E320 and a R320 CDI, I can say that the Passat delivers comparable, if not a smoother ride, and an amazing fuel efficiency. The Jetta TDI is not as economical as some praise it to be. I have owned two of them (me and my wife) and I can say that my 2010 Passat with its low 7.8l/100km is much economical than my 2009 Jetta TDI with the 6.8l/100km because around here, the diesel is 25% more expensive than gas. The Jetta TDI uses 12.8% less fuel, but it's 25% expensive, so the economy, dollar-wise, is lost. In the end, the Passat is a far bigger and better car than the Jetta. I strongly suggest the 2010 model over all others Passat because in 2010, the new 2.0l has a timing chain, the tranny is a DSG, and it's the last year build in Germany. Most say the Passat is a reasonable priced Audi A6, and I couldn't agree more.

Have you driven a 2010 Volkswagen Passat?
Rank This Car

I have a 2010 Passat low oil pressure light comes on I shut off the car I wait a while and then I put it back on everything seems fine if anybody can help with this I would highly appreciate it tha...

I Have A 2010 VW Passat Station Wagon. The Interior Lights Will Not Go Off,...

Cranks And Hard Starts But Shakes When I Press On Pedal?

My passat suddenly started puttering when I got to work it smelled like straight gasoline I turned it off until it was time to go when I tried to leave it started and continued to putter and shake ...

Hey guys, so my car has been leaking coolant for a month or so and I have taken it to a mechanic who couldnt find any leaks or anything wrong and today I went to start it and it took awhile for it ...