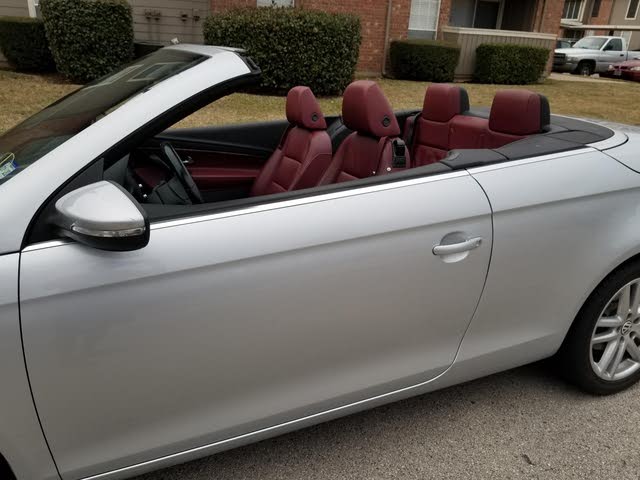 Average user score
5 ⁄ 5 stars
Based on 3 reviews
I Love It! Fun To Drive, Smooth Handling, Great Sound System, Safe, Peppy...and Convenient by crvs42 — The car is quiet with the top up and with the top down it's just a breeze to drive...if you add the back wind deflector and drive with the windows up, you can drive to your wedding with your hair inta... Read more
Review by GuruSYQ4K — The thing its missing is cup holders in the back seat. More plug for youe phone to be pluged in. They need to bring this car back . Read more

Thirty seconds. It takes less than that, actually, to turn the 2010 Volkswagen Eos from a hardtop to a fun and sporty convertible. Fun's the operative word here: It's been the first word most owners use when talking about the car since VW first introduced it in 2007.

Not a lot has changed for 2010. Volkswagen has cut back and now offers only two trims in the Eos, the Komfort and the Lux. Both come with a 2.0-liter, 200-hp, turbocharged four-cylinder with 207 lb-ft of torque. The Komfort is rated at 21 mpg for city driving, 31 highway, and the Lux rates 22/29. VW is no longer putting out the VR6 with its V6.

A six-speed manual is standard in the Komfort, and a six-speed automatic with Tiptronic is available. The Lux comes with the automatic.

Both trims have new touches, with a leather-wrapped steering wheel, shift knob, and brake handle. Bluetooth hands-free calling with voice control, a tire pressure monitoring system, satellite radio and an eight-speaker sound system, a trip computer, and an eight-way adjustable passenger seat with lumbar support are other features standard in both trims. A navigational system is optional for both.

The Eos, with its braking, traction, and stability control, along with airbags and a rollbar designed to deploy in a rollover, have consistently scored well in safety tests.

Still, it all comes back to the easy-to-use convertible - to be precise, VW says the power roof retracts in 25 seconds - in a car that generally gets good reviews from pros and owners alike in handling and especially its fun-and-sun factor. No need to despair when it's too cool or wet outside to have the top down, either: The hardtop has a sunroof in it.

The experts also like the space up front. Space in the back and the trunk? Not so much. That hard top takes up some room, after all. If your carpool includes a couple of adults in the back on a regular basis, this might not be the car for you. If you have the school route, though, the kids - including the big kids up front - will love it.

What's your take on the 2010 Volkswagen Eos?

Have you driven a 2010 Volkswagen Eos?
Rank This Car

I have a 2010 VW golf it was left running for about 8 hrs ,now this is right after a trip to New Mexico 5hrs both ways. After it had been running 7+ hrs I get on the free way. And it dies and will...

I have a 2010 VW golf it was left running for about 8 hrs ,now this is right after a trip to New Mexico 5hrs both ways. After it had been running 7+ hrs I get on the free way. And it dies and will...

They Said They Can't See My Ad

I received this note from a potential buyer: I was unable to see anything about this vehicle other than to contact you. Do you have an ad you could send me with car into please? Thank you! I tried ...

I have a 2 litre tdi eos. Wondering if anyone knows about this issue. If I get to 70 mph at highish revs about 4,000 the engine/exhaust management light comes on and goes into limp mode, if I turn...

Unable To Charge My Phone. Both A/C Outlets Not Working.

Checked the drivers side fuse box for blown fuse (42/20amp-Yellow Fuse) Any other suggestions? Could it be something more serious? Do I have to use VW only car chargers? Thanks