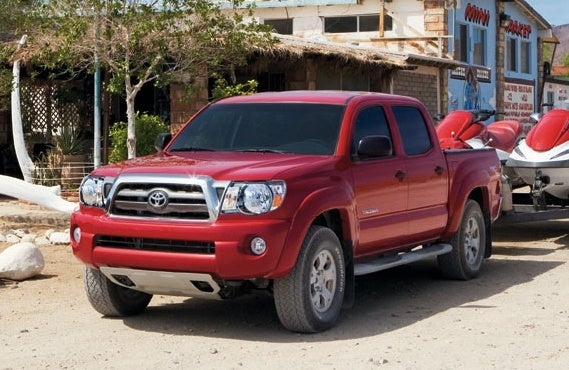 The Toyota Tacoma changes little for 2010, and continues to deliver solid performance, a capable ride, a comfortable cabin, and a wide range of trims from which to choose.

The entry-level Tacoma trims come sparsely equipped, and some owners would like to see a wider range of options and add-ons throughout the lineup.

The 2010 Toyota Tacoma offers good value for prospective buyers, delivering solid performance, competent off-road handling, and a rugged exterior. Toyota offers the Tacoma in 13 trims for 2010, so there's a Tacoma to fit just about every need and budget. All come with an extensive list of safety features, including electronic
stability control.

Toyota makes only one minor change to the Tacoma compact pickup truck for 2010, updating the front cupholder so it delivers "enhanced" functionality. Otherwise, the Tacoma retains all the attributes that have made it so popular with current owners.

The versatile, award-winning Tacoma comes in 13 trims for 2010, providing prospective buyers with a wide range of choices. Toyota offers the Tacoma with Regular, Access, and Double Cab configurations, as well as with two different engines, two bed lengths, and either rear-wheel (RWD) or part-time four-wheel (4WD) drive. In addition, buyers can opt for PreRunner trims at each cab level, which add black overfenders and a front skid plate, among other features. Toyota also offers an X-Runner high-performance trim, which includes a sport-tuned suspension, a lowered ride height, Bilstein shocks, a body-color hood scoop, an exterior body kit, and 18-inch wheels.

Engine choices for the 2010 Tacoma include a 2.7-liter, DOHC four-cylinder powerplant, which drives the Regular Cab trims and some of the Access Cab trims. It produces 159 hp and 180 lb-ft of torque, and pairs with either a five-speed manual or a four-speed automatic transmission. Fuel economy numbers for the four-cylinder engine range from 20/26 mpg for RWD trims to 17/22 mpg for 4WD trims.

Owners requiring more power can opt for a 4.0-liter, DOHC V6 engine, which drives the remainder of the Access Cab trims and all of the Double Cab trims. It puts out 236 hp and 266 lb-ft of torque, and pushes the Tacoma from 0-60 mpg in around 7.8 seconds, depending on the trim-specific configuration. The V6 mates to either a six-speed manual shifter or a five-speed automatic. Fuel economy numbers range between 17/21 and 14/18 mpg, depending on the drivetrain, wheel size, and other variables.

Both engines provide good performance both on- and off-road and give owners an option between a more fuel-efficient powerplant and a more powerful one. When properly equipped, V6 Tacomas can tow up to 6,500 pounds.

The Tacoma's part-time 4WD system comes with both high- and low-range gearing, thanks to its two-speed electronically controlled transfer case. The inclusion of skid plates and 9.3 inches of ground clearance in all but the X-Runner trim means expert performance when needed offroad.

Owners and reviewers give the 2010 Tacoma good marks for off-road performance, although some find the on-road ride harsh at times. Fully loaded, however, the Tacoma delivers a smooth and capable ride. The Tacoma comes equipped with a double-wishbone front suspension and a leaf-spring rear suspension with gas shock absorbers. A front stabilizer bar also comes standard. The X-Runner adds an X-brace-tuned suspension with gas-filled Bilstein shock absorbers and rear stabilizer bar for a sportier ride with minimal body lean in corners.

Despite its truck-like suspension, the Tacoma handles like a car during daily driving, thanks to its variable-assist power rack-and-pinion steering. Regular Cabs ride on 15-inch steel wheels, while the Access, Double Cab, 4WD, and PreRunner trims get 16-inch styled steel wheels. Toyota offers 16- and 17-inch alloy wheels as options on certain high-end trims, while the sport-oriented X-Runner sits on noisier 18-inch alloy wheels with Bridgestone tires. 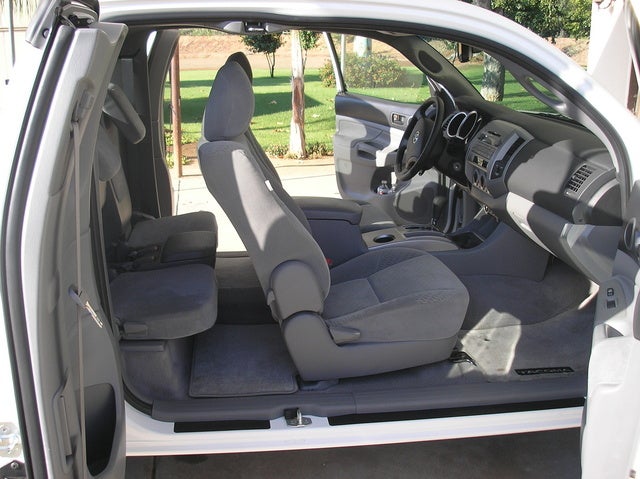 The Tacoma's cabin can best be described as functional, rather than upscale or luxury-oriented, although most owners find it comfortable, with good overall fit and finish. The sparsely equipped Regular Cabs, which feature two doors and a bench seat, come standard with a tilt/telescoping steering wheel, LED-illuminated gauges, and a four-speaker AM/FM/CD audio system pre-wired for satellite radio.

At the top of the lineup, the sporty X-Runner comes standard with such features as front Sport seats with Sport fabric, a leather-wrapped steering wheel and shift lever, remote keyless entry, and cruise control. The X-Runner also includes a backup camera integrated into the tailgate. It's linked to an electrochromic rearview mirror eqipped with a camera monitor. Owners can add the backup camera as an option on some of the other trims.

Owners call the 2010 Toyota Tacoma a solid performer, with quality construction, good handling, plenty of power, and good visibility. Owners give the Tacoma mixed reviews for its ride, however, which some find smooth and solid. However, others consider the ride too stiff and harsh. The Tacoma performs well when towing, owners say, although they recommend the V6 trims for prospective owners who plan to haul lots of cargo. Most owners find the Tacoma's fuel economy acceptable, and give good marks to the optional rearview camera.

Owners praise the Tacoma's expert handling and also compliment its roomy interior and safety features. They also like the Tacoma's overall look and style. Some owners would like to see additional optional features for all trims. Requested items include a better sound system, a sunroof, and even a diesel engine, as well as simpler options like a fold-down armrest and a garage door opener. Some also would like more standard equipment on the sparsely equipped Regular Cab. Overall, however, owners have few complaints about the 2010 Tacoma.

MazdaHemi While a great small truck, sellers of used Tacoma trucks think that they are made of gold. Be ready to haggle and hope that you find a reasonable seller.

Users ranked 2010 Toyota Tacoma against other cars which they drove/owned. Each ranking was based on 9 categories. Here is the summary of top rankings.

Have you driven a 2010 Toyota Tacoma?
Rank This Car

Paying For A Vehicle Using A Credit Card

I have a $20k credit card limit. can a person buy a vehicle using his credit card. Does it have to be with a dealership to buy with credit card. My credit rating is 850. I would like to buy, using a...

Do You Deliver International?

I want Toyota truck. But I have been thinking, do you guy deliver to nigeria port?

What could be wrong to repair. Checked gas cap. It was loose. Tightened it up turned off truck restarted and still on. Does it need to be off over night then restart?

Toyota Tacoma 2010 Just Clicks When You Try To Start It

when trying to start it, there is just one click and won't start