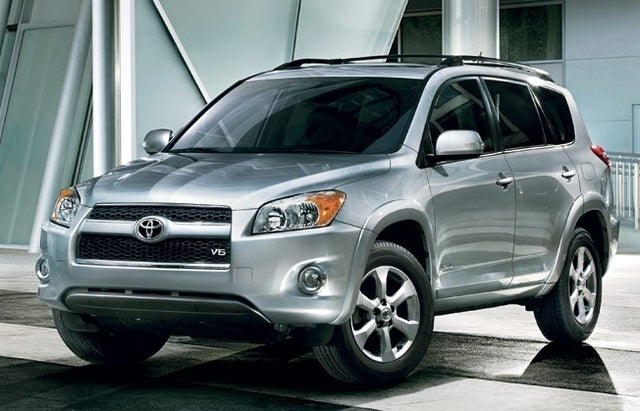 The 2010 Toyota RAV4 compact SUV continues to excel in a number of ways, offering a choice of two capable powerplants, good overall handling, available four-wheel drive, optional seating for up to seven, and sporty exterior styling combined with an ergonomic cabin.

The 2010 RAV4's optional third-row seat remains a tight fit for taller passengers, and many owners find the side-opening rear door problematic when trying to load some types of cargo.

Although the Toyota RAV4 compact SUV changes little for 2010, it continues to offer a little something for everyone, making it one of the most popular vehicles in its class. From its exterior styling to its capable handling, good fuel efficiency, and well-laid-out cabin, the RAV4 makes the road ahead just a bit easier to travel.

The Toyota RAV4 compact SUV comes in Base, Sport, and high-end Limited trim levels for 2010. At each trim level, potential owners can choose from front-wheel-drive or four-wheel-drive configurations, as well as from four-cylinder or six-cylinder powerplants, resulting in a total of 12 trims.

The RAV4 receives only minor updates for 2010. Primarily, Toyota expands the availability of high-end options packages to more RAV4 trims for 2010, providing potential owners with the ability to better customize their vehicles to fit their needs. For instance, the automaker now offers a rear backup camera linked to an electrochromic mirror with a backup camera monitor as an option for the Base trims. In addition, Toyota expands the availability of the Sport Appearance package to four-cylinder Sport trims for 2010. This package adds such features as a unique rear door, a stainless-steel exhaust tip, heated exterior mirrors with turn-signal indicators, and a chrome-accented shift knob with leather inserts.

The RAV4 received an exterior update in 2009, which added sharper angles to the front end, as well as a new grille, bumpers, and taillights. For 2010, all RAV4 trims come equipped with multi-reflector halogen headlights, color-keyed front and rear bumpers, a side-opening rear door, a rear spoiler, and high solar energy-absorbing glass. The Base and Sport trims display a black grille and include power exterior mirrors, while the Limited trims feature a chrome-accented grille and heated power exterior mirrors with integrated turn-signal indicators. 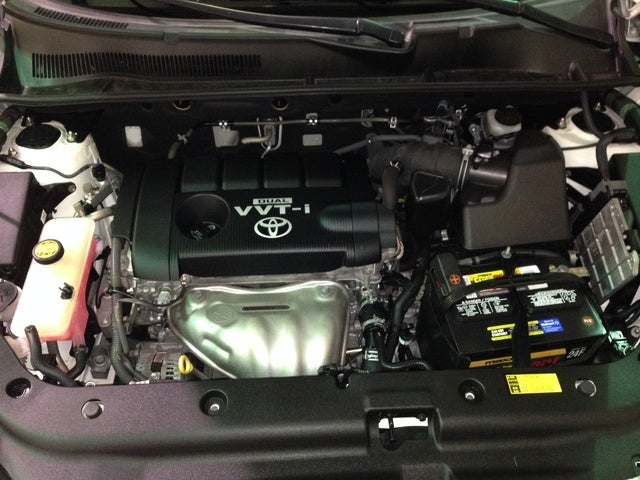 The RAV4's base 2.5-liter, DOHC four-cylinder engine, which provides standard power for all trim levels, produces 179 hp and 172 lb-ft of torque. It links to a four-speed electronically controlled automatic transmission, and posts fuel economy numbers of 22/28 mpg for front-wheel-drive trims and 21/27 when partnered with Toyota's four-wheel-drive system. Most owners find the engine adequate for around-town daily driving, although it puts out a lot of noise and struggles at times under aggressive highway driving.

Owners seeking more power can opt for a 3.5-liter, DOHC V6 engine, which makes the RAV4 the most powerful SUV in its class, producing 269 hp and 246 lb-ft of torque. The RAV4 with the V6 jumps out from 0-60 in 6.3 seconds, with quick, almost jerking off-the-line acceleration and plenty of pep beneath the pedal. The V6 mates to a five-speed automatic transmission. Fuel economy numbers for the V6 drop to 19/27 mpg with front-wheel drive and 19/26 with four-wheel drive. Both engines feature VVT-i, or variable valve timing with intelligence, which adjusts the timing on the intake valves to improve engine performance and efficiency.

Toyota offers an optional Tow Prep Package for all RAV4 V6 trims. The package, which enables the RAV4 to tow up to 3,500 pounds, includes an upgraded radiator, fan coupling, and alternator.

All RAV4 trims feature a unitized body construction, with MacPherson struts in the front, double wishbone coil springs in the rear, and power-assisted rack-and-pinion steering. As a result, the RAV4 delivers car-like handling, with a ride that mimics a compact sedan's. Owners note some body lean in turns and a nose-dive affect under hard braking, although the SUV also delivers precise handling. In addition, owners note some wind and road noise at higher speeds.

Sport trims add a performance-tuned suspension for a firmer ride, although some owners note a bit more harshness over bumps with this suspension. However, the Sport trims do provide a tighter, more precise feel in curves and a more stable ride when cornering.

The RAV4's available on-demand 4WD system, with its manual-locking center differential, provides optimal traction on all types of road surfaces. However, the system lacks low-range gearing, so it's not designed for off-roading, especially given the RAV4's scant 7.5 inches of ground clearance.

The RAV4 seats five passengers in three rows, although owners can add an optional 50/50 Split & Stow third row of seats, expanding passenger capacity to seven. The third row significantly reduces the RAV4's cargo capacity to just 12.3 cubic feet, however. Cargo capacity measures a respectable 37.2 cubic feet without the third row. Both the second and optional third rows flip and fold down with minimal effort, providing up to 73 cubic feet of cargo space when both rows are folded down. The second row features slide-forward capability, height-adjustable headrests, and a center armrest.

Inside the RAV4, owners will find a well-laid-out cabin with good ergonomics. Controls are easy to reach, and most owners find the seats comfortable, although the bolstered seats on the Sport trims can get uncomfortable on longer trips, some owners report. All trims come standard with fabric seats, although Toyota offers a Premium Package with leather seats for the Sport and Limited trims. The package also adds an eight-way power-adjustable driver's seat and multi-stage heated front seats.

In addition to the Premium Package, the RAV4 Sport adds a number of optional features not available on the Base trim, including a power tilt/slide moonroof with sunshade and a touch-screen navigation system with NavTraffic.

At the top of the line, the RAV4 Limited comes well-equipped with such standard features as dual-zone air conditioning, a leather-wrapped shift knob with metallic inlay, and a Smart Key system with push-button start and remote illuminated entry. Options for the Limited include a nine-speaker JBL audio system with a 6-CD changer, XM satellite radio, and Bluetooth.

All RAV4 trims come equipped with such safety features as Vehicle Stability Control, traction control, and antilock brakes with brake assist and electronic brakeforce distribution. Six airbags come standard, including dual front-side and side curtain bags for the first two rows of seats.

The performance of the V6-powered RAV4 trims impresses owners, who call the SUV quick and fun to drive, with good handling. The four-cylinder powerplant also draws generally favorable comments from owners. In addition, the RAV4's exterior styling and overall build quality received good marks. Owners find the optional third row of seats tight for taller passengers, although many are pleased that it's available, since few vehicles in the compact SUV class offer this option. The side-opening liftgate, rather than a traditional lift-up tailgate, remains problematic for some owners. In addition, a number of owners have commented on the RAV4's standard audio system, noting that it lacks the volume level they would prefer.

GuruMJ9J3 What kind of millage does this car get

Users ranked 2010 Toyota RAV4 against other cars which they drove/owned. Each ranking was based on 9 categories. Here is the summary of top rankings.

We have noticed that, whenever our car sits parked through a heavy downpour of rain, when we start it up, the "check engine" and "Traction Control" warning lights come on when we drive it afterwards...

At what point is the oil light supposed to come on? I've been told numerous times that my engine is low/empty of oil but the light has never come on. Also, when I check the dipstick where should ...

Has Anyone Heard Of A Flashing Dashboard?

After turning the car off, the whole dasboard starts flashing and it stays that way it never turns off. The next day the battery is dead. Has anyone heard of that issue before?

Rav won’t start. New battery in car & key fobs. Brake won’t push down the same way it always has. Dome light & headlights work. What could it be.