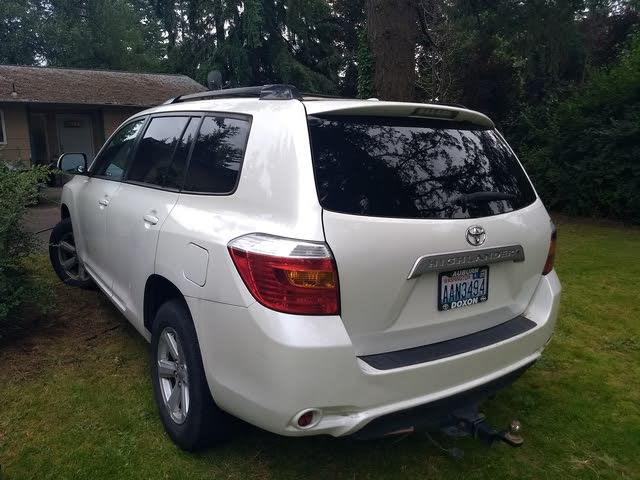 A currently but with luck only temporary image problem, less cargo room than some competitors, a lazy four-cylinder powerplant, and cramped third-row accommodations combine to lower expectations for this midsize crossover.

Presently in the doghouse, safety-wise, the 2010 Toyota Highlander is an affordable, versatile, otherwise reliable crossover that must re-establish its worth all over again. If any small Ute can rebound, however, the family-friendly, ergonomically sound, value-laden, quality-built Highlander certainly has a better shot than many.

The good news is that the 2010 Toyota Highlander is a well-conceived, midsize, five-door crossover that’ll seat up to seven passengers amid a plethora of standard cabin features. Mannerly and versatile, the Highlander is available in Base, Sport, SE, and top-shelf Limited trim levels. Each trim is available with front-wheel drive (FWD) or full-time four-wheel drive (4WD) and 95 cubic feet of cargo room with the rear seats folded down. Additionally, second-row seating can be converted from a full-width bench seat to two-place seating with third-row accessibility via a removable center section that stores conveniently in the front console. The Highlander's FWD Base trim is available with a five-passenger configuration if the inline four engine is ordered or a seven-passenger arrangement when equipped with the V6.

Though roomy enough to provide passengers with plenty of leg- and headroom, this capable crossover is also trim enough to make quick work of crowded big-city parking spaces. A choice of two powertrains, featuring a fuel-efficient inline four-cylinder (I4) or a respectably potent V6, means there will soon be a Highlander out there that’s right for just about anyone, which, unfortunately, leads to the bad news.

The 2010 non-Hybrid Highlander is among the vehicles affected by the recent and well-publicized recall/stop-sell order issued by Toyota. According to dealers, only those trims manufactured in the U.S. are affected by the current order. At issue is a possibly defective accelerator pedal, commonly called the gas pedal, which may stick, causing the vehicle to unexpectedly maintain acceleration when the pedal is released. Toyota is presently in the process of fixing this problem, and should be able to resume sales of the 2010 Highlander by the end of February 2010. Owners of the 2010 Highlander should contact the service department at their dealer, where the vehicle’s vehicle identification number (VIN) will be used to determine if their particular vehicle is subject to recall. Specifically, VINs beginning with the letter “J” are Japanese-made and not affected by the recall.

Major competition for the 2010 Highlander comes in the form of the Chevy Traverse, Mazda CX-7, Buick Enclave, Hyundai Veracruz, and Ford Flex. Though the GM crossovers are generally a bit agility-challenged, each offers a bit more cargo area. The others, though capable, have a hard time approaching the Highlander’s value. 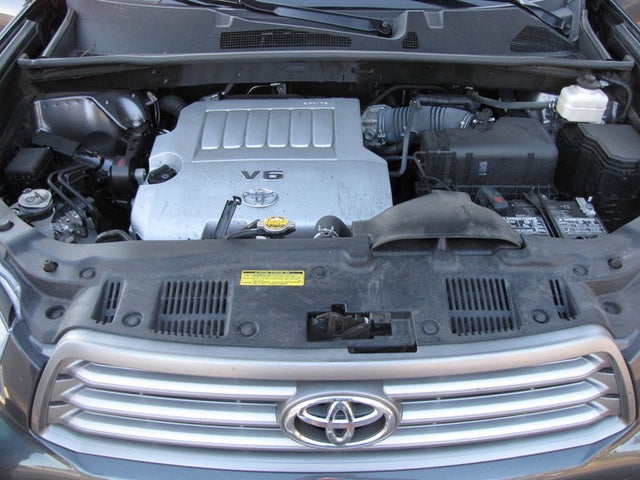 For the economy-minded, the 2010 Highlander FWD Base trim packs a 2.7-liter, variable-valve-timed I4 engine that, in combination with its standard six-speed automatic transmission, puts out 186 hp at 5,800 rpm and 186 lb-ft of torque at 4,100 rpm. This mighty-mite can tow up to 3,500 pounds when properly equipped, yet averages a respectable 20/27 mpg with what many reviewers claim is reasonably adequate acceleration.

Standard with the Base 4WD, Sport, SE, and Limited Highlander trims is a 3.5-liter variable-valve-timed V6 engine mated to a five-speed auto-manual transmission with both a hill-holder feature and, on 4WD trims, descent control. This matchup pounds out 270 hp at 6,200 rpm and 248 lb-ft of torque at 4,700 rpm. All these ponies are good to tow 5,000 pounds of trailer, while fuel numbers like 18/24 with the FWD trims and 17/23 for the 4WD versions are backed by the EPA. The V6 powerplant and five-speed automatic is also an option with the Base FWD trim.

The Highlander 4WD trims provide full-time power to all four wheels with a mechanical, center-mounted limited-slip differential. Additionally, a Snow Mode feature for additional traction in winter conditions is integrated into the five-speed automatic transmission that comes standard with all V6-equipped trims.

One reviewer claims the 3.5-liter V6 scooted from 0-60 in 7.8 seconds, while the I4 is noted by several reviewers as having to struggle a bit when passing and merging. Virtually all reviewers agree that the I4’s accompanying six-speed automatic is silky smooth up and down, while the V6 has more than enough punch to make trailer towing and cruising the highway a piece of cake.

For 2010, the Toyota Highlander sports a four-wheel independent suspension, front and rear stabilizer bars, and MacPherson front and rear struts, the Base and SE trims mounting 17-inch alloy wheels, while the Sport and Limited trims ride on 19-inch wheels. All of these components combine to give this crossover what most reviewers claim is a comfortable ride that ranks right at the top of its class. The majority of road imperfections are handled with ease, according to reviewers, even with the sport-tuned suspension equipping the Sport trim. Reviewers also note, however, that body lean is quite noticeable in hard cornering, and steering response could be improved on the Base and Limited trims.

Though somewhat heavier than the average sedan, the 2010 Highlander boasts four-wheel disc brakes that, according to reviewers, provide sure stopping with confident pedal response. Maneuverability, a downright necessity in negotiating city traffic and crowded parking lots is also noted by nearly all reviewers as one of the Highlander’s strong suits, especially in the Sport and SE trims.

Though decried by one reviewer as less well equipped than it could be, the 2010 Highlander certainly comes with all the expected comfort and convenience amenities common to the segment, plus one or two standard items not ordinarily found. The Highlander Base trim boasts cloth upholstery, power windows, door locks, and mirrors, cruise control, a tilt/telescoping steering wheel, air conditioning, alloy trim and dashboard accents, front and overhead consoles, and a single-CD player with six speakers. When the Base V6 is selected, a rear spoiler, flexible second-row seating configuration, third-row seating, and a roof rack are part of the standard equipment package. The Sport trim additionally features standard premium cloth upholstery, a flip-up liftgate window, trip computer, power-adjustable driver’s seat, leather-wrapped steering wheel, cargo-area release for the fold-down second row of seats, and a rear-view camera display. The SE trim adds a standard power sunroof, heated outside mirrors, leather-trimmed upholstery, dual-zone climate control, heated front seats, and a power-adjustable front passenger seat to the list, while the top-end Limited showers power-retractable exterior mirrors, an upgraded driver’s seat, keyless entry and ignition, auto-dimming rearview mirror, and a 6-CD changer on fortunate owners.

Options for the lower trims include many of the standard features found on the higher trim levels, while rear-seat DVD entertainment, automatic rear-seat climate control, a Towing Prep Package, JBL premium audio components, DVD navigation, and Bluetooth hands-free communications technology are all available as either package or stand-alone amenities with the Sport, SE, and Limited trims.

Most professional reviewers are smitten with the 2010 Highlander’s unique second-row seating flexibility, as well as its large, easily readable gauges, well-placed controls, and supportive, comfortable seats. Cramped third-row accommodations and the lack of a split-folding third-row seatback are not so well-received, however. Reviewers also note a certain cheesiness in some cabin trim materials, as well as issues with side and rear visibility due to thick roof pillars and rear-seat headrests.

Owner complaints concerning the 2010 Highlander seem to focus on tepid cabin materials, lackluster mileage, especially with the V6 engine, and the unavailability of driver’s memory features. Additional glitches mentioned by owners include overkill on pricey options that ought to be standard, poor quality stock tires, and an occasional lag in shifting with the six-speed automatic. A chilly reception is also given by owners to the heated seats for a lengthy delay in actually warming up.

What's your take on the 2010 Toyota Highlander?

latonyaaka By Tonya Harris I'm finding that I am consistently replacing my head and tail lights. What's going on with that. I checked with Toyota to see if this was a recall issue and was advised at a dealership that Toyota is just known for having problems with the lights...especially if replaced at other locations. Hmmmm.... I received a ticket because of this issue so I'm searching the net to find someone else that has experienced this problem like me.

muse5605 No you are not alone. We replace headlight so often on our 2010 Highlander SE that we by extra's. I have never experienced this in a vehicle before and I have owned dozens of cars.

Users ranked 2010 Toyota Highlander against other cars which they drove/owned. Each ranking was based on 9 categories. Here is the summary of top rankings.

Have you driven a 2010 Toyota Highlander?
Rank This Car

how can i be helped

My A/C On My 2010 Toyota Highlander Is Not Getting Really Cool. What Could...

My A/C on my 2010 toyota Highlander is not getting very cool. what could it be. It is paid for and has just about everything new brakes, tires, and I have maintained according to the manufactured ma...

I Hear A Drone Noise (or Loud Humming) When I Drive My 2010 Toyota Highland...

I have had my mechanic look at it. He says the ball bearings are fine. We cannot figure out why this noise commenced. It's been over a year. Any suggestions or thoughts on what could be causing th...

I have a 2010 Toyota Highlander Limited and the GPS Map DVD got lost at the dealer's business. Is it normal for the JBL sound system to not work at all when the GPS Map DVD is not inserted?