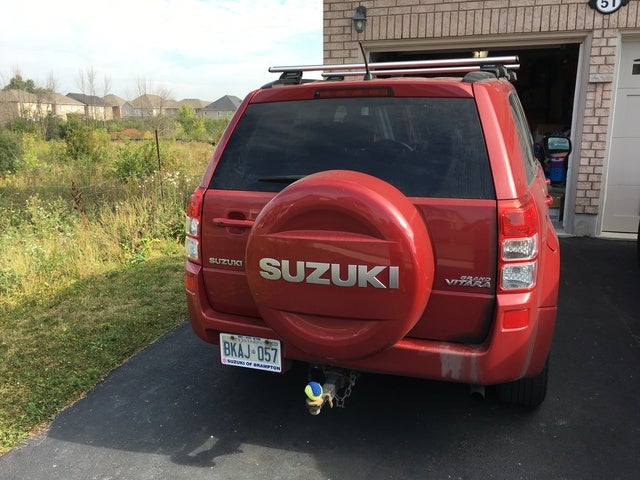 Average user score
4 ⁄ 5 stars
Based on 2 reviews
Going To Be A Great Vehicle For The Family by Dallas — Been a great vehicle so far. Came with a Garmin GPS unit. Has the smart key fob where you never need to pull your keys out of your pocket. 4x4 has came in handy lately. Could get a little better g... Read more

After receiving major updates in 2009, the Suzuki Grand Vitara midsize SUV rolls into 2010 largely unchanged. However, the automaker does increase the Grand Vitara's value quotient by adding a navigation system as standard equipment on all trims, making the Vitara the lowest-priced SUV with navigation as a standard feature. An optional navigation system upgrade adds real-time traffic, stock updates, an event finder, and on-screen Bluetooth with text display.

The rear-wheel-drive (RWD) or four-wheel-drive (4WD) Grand Vitara features unibody construction, a ladder frame, and a stiff, four-wheel independent suspension, which result in competent handling and balance, especially off-road. However, some owners and reviewers find the SUV's ride too harsh during typical everyday driving on paved roads. The Grand Vitara also tends to exhibit some body lean in tight corners. The steering system provides good response, however, and the Grand Vitara's rugged nature and affordable pricing make it a good option for adventuresome families.

Outside, the Grand Vitara displays a bold design, with short overhangs in the front and rear and flared wheel wells. Heated exterior mirrors, daytime running lights, and a side-hinged rear hatch also come standard outside. Suzuki mounts the spare tire outside the hatch to further extend the vehicle's adventure-oriented appeal.

The Grand Vitara comes in a total of nine trims for 2010, including the RWD Base trim, and the Premium, XSport, and Limited trims, all available with either RWD or 4WD. In addition, Suzuki offers a Grand Vitara Premium Special Edition and a Limited V6 trim.

A 2.4-liter, DOHC four-cylinder engine provides power for all but two Grand Vitara trims. The four-cylinder generates 166 hp and 160 lb-ft torque. It links to a five-speed manual transmission in the Base trim and a four-speed automatic in the rest of the lineup. The engine manages fuel economy of 16/26 mpg.

Owners who require more power can opt for the XSport V6 4WD or the Limited V6 trims. Both come equipped with a 3.2-liter V6 engine, which puts out 230 hp and 213 lb-ft of torque. The engine features variable valve timing and a zero-maintenance timing chain in place of a belt. Fuel economy for the V6 trims drops to 18/24 mpg.

What's your take on the 2010 Suzuki Grand Vitara?

Have you driven a 2010 Suzuki Grand Vitara?
Rank This Car

The passenger side rear floor gets wet when the a/c is on. Is there a drain that is plugged and how can I repair?

had a flat, used the spare - but now the tire monitor will not go off - even had the tires rotated

How Big Is The Gas Tank Really?