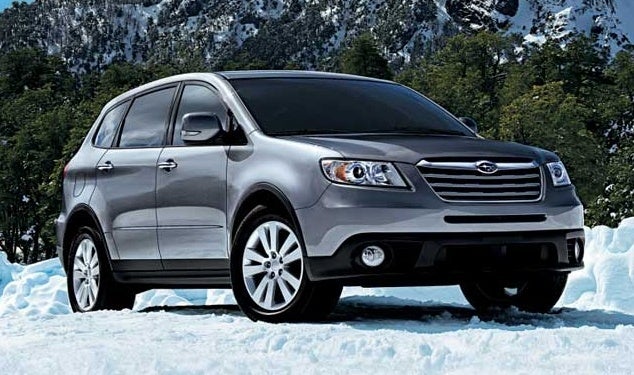 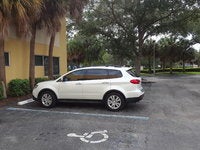 In the crowded midsize crossover market, the 2010 Subaru Tribeca stands out with its stylishly modern cabin, pristine safety scores, and standard all-wheel drive, a system Subaru does extremely well. The seven-passenger Tribeca is a bit smaller than most in its class, and its 74.4 cubic feet of maximum cargo capacity may be too little for some, but its lack of extra bulk may prove useful in urban settings.

The high-end Touring trim is new for 2010, as is the standard Bluetooth for the Premium and Limited trim levels. Also new is a back-up camera system (display in the rearview mirror) for Limited and Touring models without the optional navigation system. The Tribeca is available only as a seven-passenger vehicle, another change for 2010. The rest of the changes and equipment reorganizing are minor.

All three Tribeca trims are powered by a 3.6-liter, horizontally opposed six cylinder that produces 256 horsepower at 6,000 rpm and 247 lb-ft of torque at 4,400 rpm. The only transmission offered is a five-speed automatic with manual controls. This combination gets only 16 city/21 highway mpg, much lower than many in the class (the Dodge Journey, for example, gets 19/25). But the Tribeca goes from 0-60 mph in 7.8 seconds, a nice number for a crossover, and the torque makes around-town driving more enjoyable.

Test drivers, for the most part, appreciate the Tribeca’s performance, though none of them refer to it as “sporty.” Instead, they use words like capable, well balanced, and pleasant. It bends into corners with confidence. Its steering is responsive and not under or over-assisted. The antilock brakes provide consistent and quick stops. Subaru's Symmetrical All-Wheel Drive system is extremely reliable and well-honed. The Tribeca has an electronically controlled variable transfer clutch with a planetary-type center differential, and automatically adjusts torque distribution between front and rear according to road conditions. When conditions are normal, it’s a 45/55-split, front-to-rear, for optimum performance.

Critics and owners alike lavish the Tribeca cabin with praise, and it’s easy to see why. The sunken and asymmetrical speedometer and tachometer, the deep curves of the center dash, and the creative yet ergonomic layout give the Tribeca a flair and style that is truly unique. Plus, the construction is airtight, and the accessories are plentiful, even if some of the materials are a bit hard.

The first two rows of seats are comfortable for long rides for any size adults, but the third row is really best suited for small children. With all three rows in use, however, the Tribeca has just 8.3 cubic feet of storage space. When the third row is folded down (as it will be most of the time for most owners), that number jumps to 37.6 cubic feet of space, and with both the second and third row down, it moves to 74.4 cubic feet. There are plenty of interior storage nooks, including cupholders in the door pockets, underfloor storage in the cargo area, net storage on the side of the cargo area, and grocery hooks.

Subaru spared no expenses with the Tribeca when it comes to safety. All trims come standard with AWD, Vehicle Dynamic Control, traction control, antilock brakes with electronic brakeforce distribution, brake assist, front and rear side curtain airbags, and front-seat-mounted side-impact airbags. The Tribeca earned the maximum five stars in all crash test results and earned a four-star rollover rating, above average for an SUV.

What's your take on the 2010 Subaru Tribeca?

Have you driven a 2010 Subaru Tribeca?
Rank This Car

What Is The LL Mark On My Engine Oil Dipstick For A 2010 Tribeca?

What is the LL mark on my engine oil dipstick for a 2010 Tribeca? It is about half way between the holes as seen in the attached picture.

Just had dealer replace Recalled passenger airbag. However found after getting car back the 4 way flasher button on dash did Not stay down when pressed to keep 4-ways on. Took back to dealer who ...

My vehicle's engine needs to be replace. Dealer told me that it must have not been receiving enough oil but my oil light never went on, ever and we always maintained oil service. Should Subaru kick ...

Subaru Tribeca Driver's Side Wiper Blade Not Same As Bosch 26A. Does Not Fi...

According to several cross ref the Bosch 26A should fit Tribecas 2008 to 2012. But the hook on the wiper OEM arm is too wide to fit the slot on the Bosch. Any one else find the same?

I Have A 2010 Tribeca And The Highbeam Needs Bring Down, Where Are The Adju...