The 2010 Scion xD is a funky four-door economy compact hatchback with sure handling and an array of charming and useful customization options to fit your personality.

The 2010 xD has a noteworthy lack of cargo space, the front seats can’t accommodate tall drivers, and its ride can be jarring on rough roads.

If you want to express your own sense of style through your vehicle and that style trends toward the unconventionally hip, then the 2010 Scion xD is absolutely the car for you. If you care more about hard, fast driving and the ability to carry large loads, this compact is likely not for you.

The 2010 Scion xD manages to be practical and whimsical all at the same time. A subcompact built on the same platform as the Toyota Yaris, the xD gets great gas mileage (29 combined) and falls within most acceptable price ranges. Unlike the bare-bones Yaris, however, the xD comes standard with features like cruise control, air conditioning, and power mirrors with integrated turn signals. But what makes the xD even more fun, and funky, is the long list of available dealer-installed options (from performance upgrades to illuminated doorsill logos) so you can shape your xD just the way you like.

The 2010 xD is very similar to the 2009 edition, but the newer version adds vehicle stability control as a standard feature, a nice boost to the xD’s safety and handling. An optional Alpine Premium Package, which comes with a touch screen and HD radio, is also new this year.

Only one trim is available for the xD, but that one trim can be configured however you'd like, so it’s hardly limiting. Even without optional baubles decorating your xD, it will likely stand out in a crowd with its boxy lines, low profile, and aggressive front end with sleek horizontal halogen headlamps. 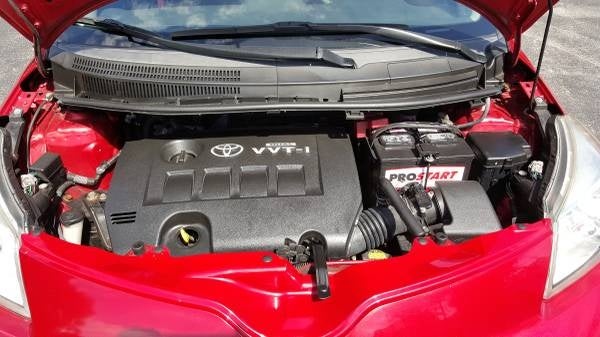 This was never meant to be a high-performance vehicle, so don’t expect the xD to blow you away with power, although it does provide above-average pop for its class. If you want to squeeze the most juice you can from the xD’s powertrain, the smooth manual transmission is the best choice.

The xD delivers a predictable ride, especially around town. With its low stance and electric power steering, the xD handles tight corners and parking spaces with ease. Average acceleration at high speeds plus noticeable wind and road noise make the xD less appealing for highway travel, but it’s hardly a chore to drive it long distances.

The xD’s antilock brakes attract lots of praise from critics for their solid feel and reliable stops. The xD came to a stop from 60 mph in 123 feet in one brake test, which is an excellent result. On the flip side, most test drivers agree that the C pillars impede some sightlines. However, they also agree that while this is annoying, it can be overcome and is not a major safety concern.

Even without any additions, the xD has a stylish and well-designed cabin. The gauges are easy to locate (unlike many of Toyota’s other compact cars, which have center-mounted gauges) and most are easy to read, although the hands of the speedometer and tachometer sweep unnaturally toward each other. The instrument panel and center stack both have a modern feel, but the controls are simple to use. Scion used a lot of hard plastics in the xD’s cabin, yet it manages to avoid feeling cheap.

The front seats are upright and comfortable for extended periods of time, and offer loads of headroom. Legroom, on the other hand, is somewhat limited, and taller drivers may find that a problem, especially combined with the lack of a telescoping steering wheel. The back seats offer comfort and room not often associated with compact cars, because they can slide back and forward and recline up to 10 degrees.

Cargo space is not plentiful in the xD, which has just 10.5 cubic feet behind the second row. If the rear seats are folded down, that storage space expands to 35.7 feet. If this isn’t enough room but you love the xD, take a look at its big brother, the xB, which has 69.9 cubic feet of available cargo space.

The xD earned five out of five stars in government side-impact crash tests for both front and rear passenger safety, and earned four stars in front-end crash tests and a four-star rollover rating.

There is a common complaint among xD owners – a less than smooth ride. Drivers say they notice potholes and other road imperfections more than normal and worry about premature wear from too much jarring. Also, multiple owners complained about the lack of a standard armrest.

Other than that, owners seem to really enjoy their xDs. Even those that complained about the ride were still happy with their xD overall. They love the available options and the fuel efficiency, which not only lives up to the projected mpg numbers but surpasses it some cases.