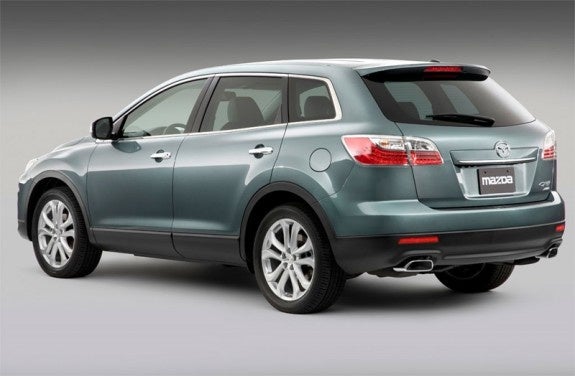 Mazda improves its CX-9 crossover SUV for 2010 by introducing a number of exterior and interior updates, including a revamped grille, upgraded seat upholstery, and new interior chrome accents.

Mazda fails to address areas of concern expressed by CX-9 owners in previous years, such as the SUV's fuel economy, third-row-seat legroom, and inadequate number of interior storage spaces.

Despite its few drawbacks, the Mazda CX-9 delivers a fun, functional, and well-rounded package for 2010, combining both sporty and luxury-oriented elements in a solid, well-designed body. The high-end Grand Touring trim in particular comes standard with such features as a Blind Spot Monitoring system, typically offered only as an option in similar vehicles. Owners seeking a safe, well-equipped SUV with seating for seven should give the CX-9 a look.

The Mazda CX-9 crossover SUV receives a wide range of updates for 2010, including exterior revisions and an upgraded interior. New exterior features include a restyled grille, headlights, and foglights, as well as larger, more aerodynamic side mirrors and a revamped rear end with new taillights, which mimic the look of the front headlights. In addition, Mazda offers the CX-9 in a new Dolphin Gray color for 2010.

Inside, updated features include a new center console, upgraded fabric seats, and chrome accents throughout the cabin. In addition, the leather seats, which come standard in upper-end trims, now have a more quality feel with subtle stitching.

Introduced in 2007, the Mazda CX-9 midsize SUV seats seven passengers in three rows. Available trims for 2010 include the entry-level Sport, the mid-level Touring, and the top-of-the-line Grand Touring. As in previous years, all CX-9 trims come equipped with either front-wheel drive or with Mazda's Active Torque Split all-wheel drive system. 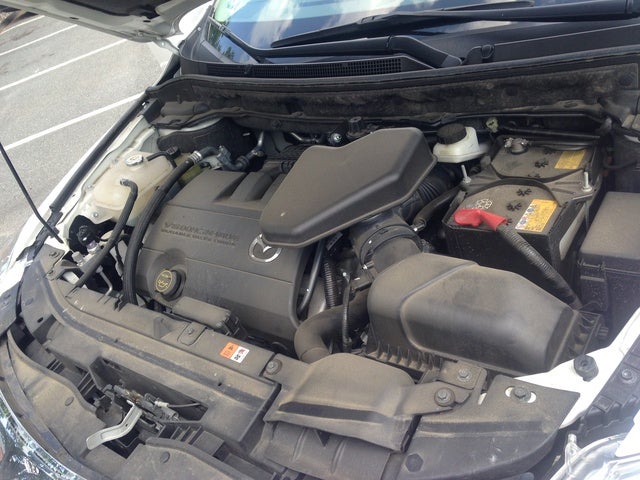 A 3.7-liter V6 engine, which carries over from the previous year unchanged, powers all CX-9 trims. The V6 generates 273 hp and 270 lb-ft of torque, providing good performance for accelerating and passing at highway speeds. In all trims, the engine links to a six-speed Sport AT electronically controlled automatic transmission with a manual-shift mode.

AWD trims feature Mazda's Active Torque Split all-wheel-drive system, which sends 100 percent of torque to the front wheels during normal driving conditions, but sends torque to the rear axle or to wheels with traction when it detects slippage. The AWD CX-9 trims achieve fuel economy numbers of 15/21 mpg, according to EPA estimates, while fuel economy for the front-wheel-drive trims improves slightly to 16/22 mpg.

The 2010 CX-9 rides on a car-based platform, making it the only SUV in its class to do so. It features a four-wheel independent suspension with Macpherson struts in the front, a multilink configuration in the rear, and stabilizer bars in both the front and rear. The stiff unibody chassis helps ensure a tight, solid ride, while rack-and-pinion steering with engine-speed-sensitive variable power assist ensures good agility and control. The Sport and Touring trims ride on 18-inch wheels, while the Grand Touring comes equipped with 20-inch wheels.

The CX-9 performs well around town, delivering smooth acceleration, and stays flat in corners, with minimal body lean. However, it can feel heavy at times, given its rather hefty curb weight of 4,334 pounds (4,550 for AWD trims), and can feel oversized in some parking lots.

Drivers will find the CX-9's gauges easy to read and access on the T-shaped instrument panel. In addition, the entertainment and climate controls are clearly marked for easy operation. The first and second rows offer plenty of legroom, although taller adults will feel cramped in the third row. Storage bins and cubbies include eight cupholders, four bottle holders, and storage pockets in all four doors, as well as bins in the center armrest. Owners can also store gear in a cargo area under the rear floor.

The 2010 CX-9 features a comfortable and versatile cabin with a 60/40-split fold-down second-row seat, which slides forward and back, and a 50/50-split fold-down third-row seat. The Sport trim receives upgraded high-density seating fabric for 2010, while the Touring and Grand Touring trims both come standard with upgraded leather upholstery in the first and second rows, and vinyl seats in the third row. Manually adjustable front seats in the Sport trim upgrade to power-adjustable front seats in the Touring and Grand Touring trims.

A six-speaker AM/FM audio system with a CD player, an MP3 input jack, and steering-wheel-mounted controls comes standard on all CX-9 trims. Drivers can add Sirius satellite radio as an option, or upgrade to a 10-speaker audio system with Bose speakers and a 6-CD changer, or an 11-speaker system with a 9-inch rear-seat DVD player. Other options for the CX-9 include a power-sliding glass moonroof and a power-operated liftgate, both available on the Touring and Grand Touring trims, and a DVD-based navigation system with a 7-inch touchscreen, available on the Grand Touring trim.

The 2010 CX-9 received a top rating of five stars for protecting passengers in front and side impacts from the NHTSA, and four out of five stars for rollover protection. Antilock brakes, traction control, Dynamic Stability Control, and a Roll Stability Control system are among the CX-9's standard safety features. The CX-9 also comes equipped with a full range of airbags, including dual front side-impact airbags and side-curtain airbags with rollover protection for all three rows.

The Grand Touring trim comes standard with a Blind Spot Monitoring system, which monitors areas on both sides of the vehicle and alerts the driver via a warning light and audible signal when it detects vehicles entering those areas. In addition, owners can add an optional backup camera with a color display, available on the Touring and Grand Touring trims.

The 2010 Mazda CX-9 handles and performs well, according to owners. Although it can feel heavy at times, it delivers respectable acceleration and good mid-range torque, with responsive steering. However, most owners would like to see better fuel economy from the CX-9. Owners give the CX-9 good marks for its solid feel and overall fit and finish, and find the interior roomy and comfortable, although some would like more room in the rear seat. Owners would also like more interior storage spaces. Such safety features as the Blind Spot Monitoring system and optional backup camera get good marks from owners. The exterior design receives mixed reviews, although most owners like the rear-end design. Overall, owners consider the CX-9 a good value and would recommend the vehicle.

rplayer I bought my CX-9 brand new in 2010. It is a great ride, love to drive it, and get nothing but compliments on the way it drives from everyone who drives it. My husband is not a small man so the interior room was important to us, too. Within two years it was in the shop having the tailgate sensor replaced. We had it replaced another time about three years after the second one. As soon as we paid it off this past September the vehicle has gone down hill. We had to replace the water pump, which was an ordeal, and the local dealer was a nightmare. We honestly believe that the dealer sabotaged my car with a part from another vehicle because we chose to use our family mechanic but needed the dealer to verify the problem (specific coding not recognized by three outside machines). This sabotaged part gave a similar code to the water pump and we think the dealer was counting on us having to take it back to them. We did take it back to a dealer but one that was in the next city. They were very nice and worked with our mechanic without any incident. Now, my CX-9 has an oil leak in two places, the motor on the driver side window is going out and we just discovered a gas leak this week. All within a few months of paying it off. So, needless to say our family will not purchase another Mazda product again. We have had nothing but issues with the dealer we purchased the vehicle from also. Going back to our trusty Toyotas!

Guru9TDF84 It;s not the dealer it the vehicle itself the 2010 water pump and brake booster, just do your online research.

Users ranked 2010 Mazda CX-9 against other cars which they drove/owned. Each ranking was based on 9 categories. Here is the summary of top rankings.

179 views with 3 answers (last answer about a year ago)

How Can Soften The Ride On The CX-9

Is there a tire that will give a softer ride? What make/model of tire do you recommend? Can I reduce tire pressure from 36 to 33? Thanks

What Is FI Service On Mazda CX9?

Just came from the dealer with my 2010 Mazda CX9 w/ 140k miles They suggested a EFT Service at $350. This involved cleaning the plenum and such, not just adding additive to the fuel. Has anyone herd...

Heat Won't Work In The Front

My heat won't work in the front at all but in the back it will.

Just replaced break rotors, pads, shocks and struts at 154,000 miles. Now I hear a chirping inside car from center/right side when moving at 50 mph + and steering wheel is streight. Chirping stops...