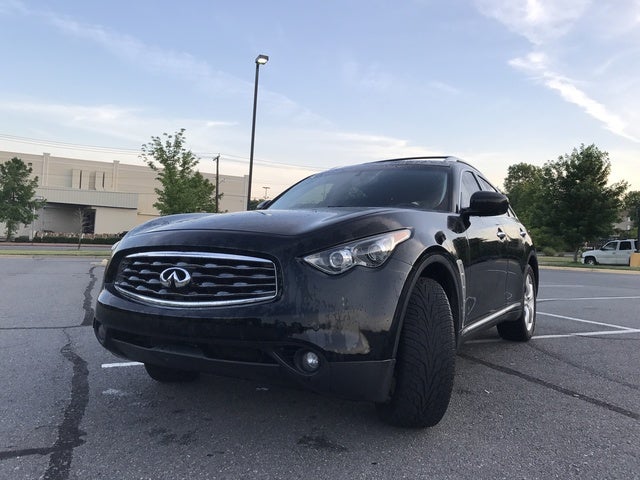 Not wanting to be left behind, Infiniti added several features to its 2010 FX35, a vehicle that was redesigned just last year. Bluetooth, along with a USB port and iPod interface, previously optional, are now standard on all FX trims and models, and a 2GB hard drive has been added to trims without the optional navigation system. However, if you choose to add the optional nav, you’ll also get streaming audio via Bluetooth and several software updates including NavWeather and the Zagat restaurant guide. The exterior has also been tweaked, with a re-sculpted rear taillight section and added side vents, all of which add up to a reduction in drag coefficient of .02.

These exterior changes do nothing to quell complaints since the 2009 redesign – and you have to admit the FX35 does look like some kind of mutant Dr. Moreau hybrid of a modern crossover vehicle and a late-'90s Hyundai Tiburon – but the FX35 has had a wealth of admirers as well. Graceful aggression is achieved with its bulging quarter panels and low-slung grille, and the profile is low enough to avoid any of the stodginess attributed to many SUVs.

Although available in rear-wheel-drive (RWD) and all-wheel-drive (AWD) configurations, the FX35 is restricted to one powertrain combination – a 303-hp, 3.5-liter V6 with a seven-speed automatic transmission. With AWD, it offers a maximum towing capacity of 2,000 pounds, not exactly impressive. Fuel economy isn’t all that impressive either, as the FX35 registers 16/23 mpg with RWD and 16/21 with AWD, both with premium fuel.

Infiniti makes up for those shortcomings in standard features, but you’ll pay for them in the sticker price. Things usually found on the options list - leather upholstery, heated power mirrors, bi-xenon headlights, keyless entry and start, and a rear-view camera – are all standard. You also have the option of Infiniti’s Lane Departure Warning System and Lane Departure Prevention, which will alert the driver or stop the vehicle if it wanders outside the intended lane, respectively. Around View Monitoring offers a 360-degree view of the outside of the vehicle, and Infiniti’s Intelligent Brake Assist warns of imminent crashes and will even apply the brakes if a crash is unavoidable. All those options, along with front pre-crash safety belts, adaptive cruise control, rain-sensing wipers, and steering-linked adaptive headlights are included in the optional Technology Package, which also requires the Navigation and Deluxe Touring Packages.

Visibility has been an issue for the FX series for many years, and nothing in 2009 or 2010 has fixed that. In fact, Infiniti’s answer has been the Around View Monitoring system. While an impressive and useful piece of technology, it’s still a band-aid for bad design. For the money you’re spending, even for the smaller of the FX brothers, I’d much rather be able to use my eyes.

People Can Not Hear Me Clearly When My Phone Is Connected To The Bluetooth ...

people can not hear me clearly when my phone is connected to the car bluetooth. what do you think is the problem?

298 views with 3 answers (last answer about a year ago)

car is locked battery is dead. locks wont open hood latch is inside. what do I do.

What Happens After Ordering The Vehicle And The Mechanic Doesn't Approve Of...

What happens after ordering the vehicle and the my mechanic doesn't approve of it?

Shipping A Car Bought Through A Dealer Associated With CarGurus

I am trying to buy a car in Santa Cruz, California and need to find a shipping company, trucking company to ship it to Las Vegas

Does Anyone Know A Trucking Company That Will Deliver A Car I Am Buy In Ass...

I am buying a car using CarGurus app. I need a trucking company that will treat me fare. Shipping from Santa Cruz to Vegas.