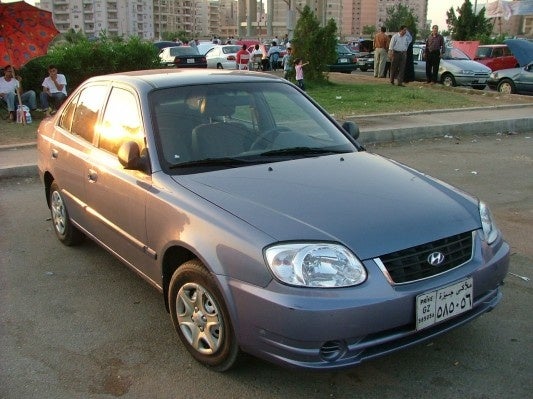 The Hyundai Accent becomes more fuel efficient for 2010, thanks to the introduction of the new high-mileage, low-price Blue trim, as well as the addition of a new "eco indicator" light, which informs drivers when they're improving fuel economy due to their driving style.

The 2010 Accent continues to lag behind the competition in a number of areas, including its handling and standard safety equipment, such as antilock brakes, which come standard on only one trim.

The 2010 Hyundai Accent achieves what it sets out to do, offering potential buyers a capable, fuel-efficient, and affordable commuter vehicle in either hatchback or sedan configurations. Some owners knock the Accent's performance, safety features, and body lean in corners, but others find it attractive on the outside and roomy on the inside. Buyers seeking a low-priced, practical ride should take a look at the Accent.

With the introduction of the Hyundai Accent Blue, the Accent lineup expands to four trims for 2010. The three-door Blue checks in as the lowest-priced and most fuel efficient Accent trim available this year. It posts fuel economy numbers of up to 36 mpg, thanks to carefully calibrated transmission gear ratios and a low ride height, which helps improve aerodynamics. It also comes with a stripped-down list of standard features, which helps to keep its cost down.

The three-door Accent Blue hatchback joins the existing Accent trims, including the three-door GS hatchback, the four-door GLS sedan, and the three-door SE hatchback, all of which post improved fuel economy numbers for 2010, according to EPA estimates. Hyundai also adds a standard iPod/USB auxiliary input port on all trims equipped with an audio system as standard equipment, and standard blue backlit gauges on all Accent trims. In addition, the automaker adds steering-wheel-mounted audio controls as a standard feature on the SE trim, and makes cruise control, a sunroof, and antilock brakes new options on the GS trim. 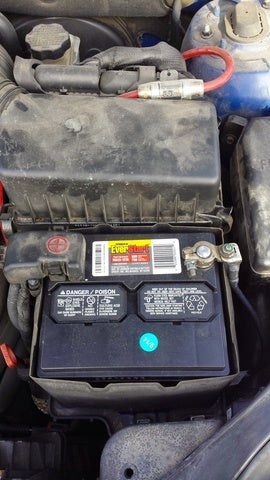 The Blue trim achieves fuel economy numbers of 28/36 mpg, according to EPA estimates, while the GS, GLS, and SE manage still-respectable numbers of 28/34 mpg with the manual transmission, compared to 27/33 mpg for the previous year. When mated with the automatic transmission, the engine posts fuel economy numbers of 27/36 mpg, compared to 26/35 for the previous year. All trims are front-wheel-drive vehicles and run on regular unleaded gasoline.

For a low-priced, entry-level vehicle, the Accent performs adequately, though it struggles under acceleration when fully loaded or with the air conditioning on. Overall, most owners find the engine relatively quiet except when pushed. Those who prefer slightly better performance might want to choose the five-speed manual transmission, which enables downshifting to coax a bit more pep from the powerplant.

The 2010 Hyundai Accent rides on Macpherson struts in the front and a torsion beam axle suspension in the rear. The Accent SE upgrades to a sport-tuned suspension with a stabilizer bar, unique springs, and strut valving, which together provide a 70 percent increase in roll stiffness over the GS, according to Hyundai. Sport-tuned power-assisted rack-and-pinion steering also comes standard throughout the line.

The SE's sport-tuned suspension helps improve road grip and stability when cornering, although some owners find the ride a bit too harsh. Most owners note a softer ride for the other trims, although some find it too floaty, especially on the highway. In addition, the narrow tires on the Blue, GL, and GLS trims (14 inches) contribute to some body lean in turns. The SE's 16-inch alloy wheels help reduce body lean and provide a more comfortable overall ride. The entry-level Blue receives low-roll-resistance silica tires, which help improve fuel efficiency.

The 2010 Hyundai Accent offers a roomy interior for a vehicle its size. Even taller passengers will find plenty of legroom and headroom in the front, although they might feel cramped in the rear seats. Potential buyers seeking a roomier backseat should check out the Nissan Versa or the Toyota Yaris. The rear seats in all trims split 60/40 to expand cargo space, which checks in at a generous 15.9 cubic feet for the hatchbacks, while the sedan offers a still-respectable 12.4 cubic feet of trunk space. The shallow trunk opening, however, can sometimes cause difficulty when loading larger objects.

To maintain its low entry-level pricing, the Accent Blue comes with a relatively sparse standard feature list, which includes a six-way manually adjustable driver's seat, a rear cargo cover, and a rear window defroster. Hyundai also includes an air conditioning prep package and an audio prep package with four speakers, although owners must add the actual air conditioning and audio systems as options.

The GS hatchback includes air conditioning as a standard feature, although not an audio system. Other standard features for the GS include a tilt steering wheel, maplights, a sunglass holder, and a rear wiper, while the GLS sedan adds illuminated vanity mirrors, a passenger-side front seatback pocket, a rear center armrest with cupholders, and a six-speaker 172-watt AM/FM audio system with MP3 and iPod/USB input jacks. The SE hatchback holds the distinction as the best-equipped Accent trim, with an expanded standard feature list that includes a leather-wrapped steering wheel and shift knob, steering-wheel-mounted audio and cruise controls, power windows and door locks, remote keyless entry with an alarm, and a power tilt-and-slide sunroof. Options for all trims are limited to such features as Bluetooth, carpeted floor mats, and aluminum door sills.

Hyundai makes antilock brakes with electronic brakeforce distribution available as an option on the GS trim for 2010. Antilock brakes are also optional on the GLS trim and standard on the SE trim, but unavailable on the Blue trim. The automaker does not offer stability control for the Accent. However, all Accent trims come standard with side curtain airbags for both rows on all trims, as well as dual front airbags.

Most owners are attracted to the 2010 Accent for its affordability and good gas mileage, and they give it good marks in those areas. In addition, many owners defend the Accent's performance, finding it more than adequate for everyday driving. The Accent's exterior design and roomy interior also receive positive comments from owners. The Accent handles well at lower speeds but tends to lean when taking corners at higher speeds, owners say. Still, many find the Accent fun to drive. However, most would like to see more standard features for all trims.

What's your take on the 2010 Hyundai Accent?

Al The Eco system works great under 70 miles per hour, once you're over that you're on your own, but good car overall, parts are not too expensive either

Users ranked 2010 Hyundai Accent against other cars which they drove/owned. Each ranking was based on 9 categories. Here is the summary of top rankings.

Have you driven a 2010 Hyundai Accent?
Rank This Car

Hyundai Atos Gls Prime 2010. I want to replace the single din factory radio with a single din flip out screen radio that I can use with phone gps as well. What do you recommend

My cooking fan for engine is not coming on but no check engine light. No over heating. And the AC fans not working. Checked relay and fuse where is the sensor

184 views with 3 answers (last answer about a year ago)

I found a little ding in the right front fender?

Where is the transmission dipstick?

Does this make sense, I noticed today that I have to slam car door much harder to close when AC is working & blower at high speed as well as when all windows are closed. This only happens when fresh...