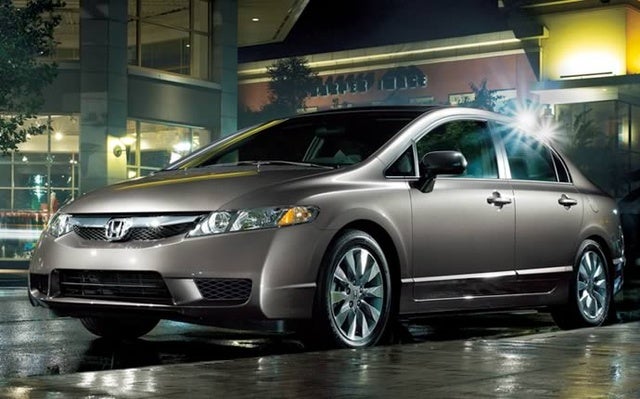 The 2010 Honda Civic delivers a capable ride and good handling, and continues to excel in a number of areas, including fuel economy and reliability.

The Civic receives mixed marks for its overall performance, and some owners find the 2010 Civic's cabin tight and sparsely equipped, especially in the lower-end trims. 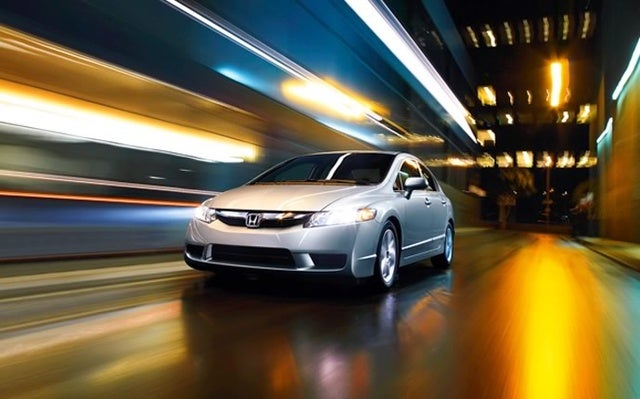 The Honda Civic meets owners' needs in a number of ways, providing a reliable, economical, and comfortable daily commuter with good looks and good fuel economy. While some owners would like to see better performance, and others would prefer more gadgets, the Civic does a good job of combining numerous positive traits into a single package, and offering a wide range of trims and options designed to fulfill the requirements of a wide range of drivers.

The Honda Civic compact sedan rolls into 2010 virtually unchanged, following a mid-cycle refresh in 2009, which added such features as new headlights, taillights, and wheel designs, as well as upgraded interior seating cloth. The Civic retains its streamlined shape, with its long windshield and fairly short rear end, as well as its fuel-efficient engines and well-tuned suspension, resulting in minimal body lean and responsive handling.

Honda offers the Civic in eight trims for 2010, including DX/DX-VP, LX/LX-S, and EX/EX-L trims, as well as fuel-sipping Hybrid and sporty Si versions, giving prospective buyers a wide range of choices. The Civic LX-S, for instance, comes equipped with a black sport-trimmed interior, a rear spoiler, and 16-inch alloy wheels, while the EX-L trim pampers passengers with a leather-trimmed interior and an available navigation system. Owners seeking fuel economy can opt for the Civic Hybrid, which manages up to 45 mpg on the highway, thanks to its hybrid engine, while the Civic Si features a close-ratio shifter, power moonroof, and 350-watt audio system, as well as the most powerful engine in any Civic trim.

The Civic continues to excel in reliability and resale value, and remains near the top of its automotive segment, according to most owners and reviewers. However, some owners find the Civic lacking in such areas as cargo space and interior comfort. 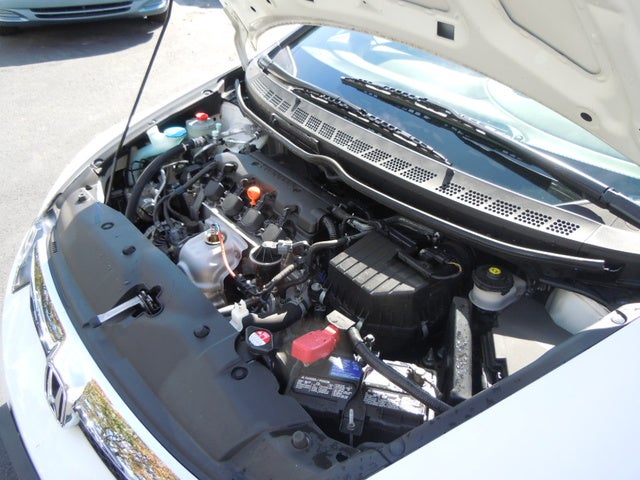 A trio of fuel-efficient four-cylinder engines powers the various Civic trims. The standard powerplant remains a 1.8-liter i-VTEC four-cylinder engine, which drives the DX, LX, and EX trims and their trim-level mates. This powerplant generates 140 hp and 128 lb-ft of torque, and features multi-point fuel injection, a Direct Ignition system, and a Drive-by-Wire throttle system, which enhance performance, fuel economy, and responsiveness.

A five-speed manual transmission comes standard in all trims with the base four-cylinder engine, while drivers can opt for an available five-speed automatic. Owners report good performance for daily driving with either the manual or automatic, although the powerplant seems particularly responsive when mated to the automatic, owners note. The EPA estimates fuel economy numbers of 26/34 mpg with the manual transmission and 25/36 with the automatic. The engine runs on regular unleaded fuel.

The Civic Hybrid's powerplant combines a 1.3-liter, SOHC four-cylinder gas engine with a 15kW electric motor, which together produce 110 hp and 123 lb-ft of torque. The Hybrid sends power to the wheels through a CVT continuously variable transmission, which provides smooth shifting. The powerplant posts fuel economy numbers of 40/45 mpg, achieved in part by an idle-stop feature, which shuts down the engine when the vehicle stops in traffic to conserve fuel. A similar fuel cut-off feature saves gas when the Hybrid decelerates. A regenerative braking system recharges the Hybrid's 158-volt nickel metal hydride battery.

The hybrid system switches smoothly and precisely between gas and electric operations, owners report. However, some owners would like to see better performance from the powerplant when accelerating or passing.

The Civic Si retains its 2.0-liter, dual-overhead-cam four-cylinder engine, which produces 197 hp and 139 lb-ft of torque. Variable valve timing, a cold-air intake, and a high-flow, low-heat exhaust manifold result in a quieter exhaust note at cruising speeds but a full, throaty sound under aggressive acceleration. The engine mates to a close-ratio six-speed manual transmission. Fuel economy numbers for the Si check in at 21/29 mpg. 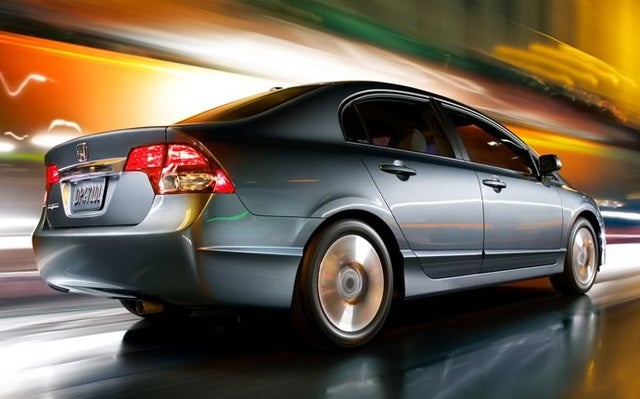 The front-wheel-drive Civic delivers a smooth, comfortable ride, with minimal body lean and a good balance in corners, thanks to MacPherson struts in the front and a multi-link rear suspension. However, prospective owners will find quite a bit of ride variation between the trims, due in part to tire size. The DX trim level gets 15-inch wheels, which upgrade to 16-inch wheels for the LX and EX trim levels (the LX-S and EX-L receive alloy wheels).

The Si gets 17-inch alloy wheels with all-season Michelin tires. In addition, it comes equipped with a sportier suspension tuning than the base trims, with a firm spring rate, minimizing road irregularities with little or no ride harshness. The Civic Hybrid receives 15-inch low-resistance light alloy wheels, which some feel lack grip in tight curves. Overall, however, all Civic trims get acceptable marks for handling, with good pedal feel.

Some owners find the Civic's engine noise intrusive, especially when passing. In addition, some report occasional vibrations coming through the steering wheel, although not enough to cause concern. 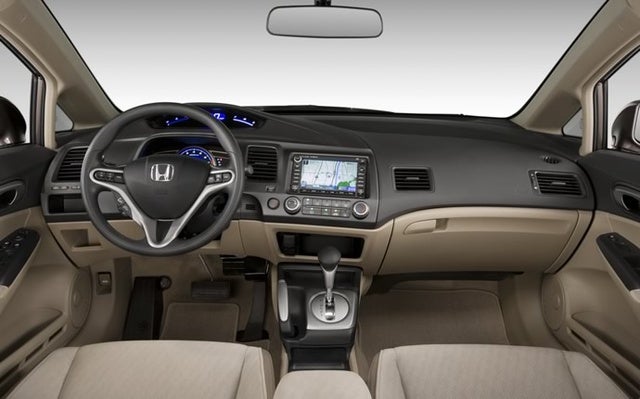 Inside, owners will find a comfortable cabin, with plenty of legroom and headroom in the front seat, and enough room in the back for all but the tallest passengers. Most find the interior's fit and finish good for its class, though some find it overly plasticky.

The Civic's eight trims offer something for just about every buyer, from the basic to the relatively luxurious. Such features as power windows, a tilt/telescoping steering column, blue backlit gauges, rear-seat heater ducts, and a fold-down rear seatback come standard on the Civic DX, while the DX-VP adds air conditioning and a 160-watt, four-speaker AM/FM audio system with a CD player, speed-sensitive volume, and MP3 input jack.

Stepping up a notch, the mid-level Civic LX comes equipped with such standard features as power door locks, cruise control, a center console with a sliding armrest, and map lights, while the LX-S adds a perforated leather-wrapped steering wheel, as well as such exterior features as a rear spoiler and chrome exhaust pipes.

At the top of the line, the Civic EX includes a one-touch power moonroof, steering-wheel-mounted audio and cruise controls, a six-speaker audio system, and a USB interface jack, while the EX-L comes well-equipped with such upscale features as leather-trimmed upholstery and heated front seats. In addition, such options as Bluetooth and a navigation system with voice recognition and XM satellite radio are available only on the EX and EX-L trims.

For the Civic Si, the audio system upgrades to a 350-watt, seven-speaker system with a subwoofer and a CD player. The Si also comes standard with a power moonroof and offers a navigation system with Bluetooth as an option.

Cargo space remains about typical for a compact car, at 12 cubic feet. A wide opening makes the cargo area accessible, although the hinges can become an obstacle when loading some types of cargo. In all trims, a fold-down, 60/40-split rear seat comes standard. 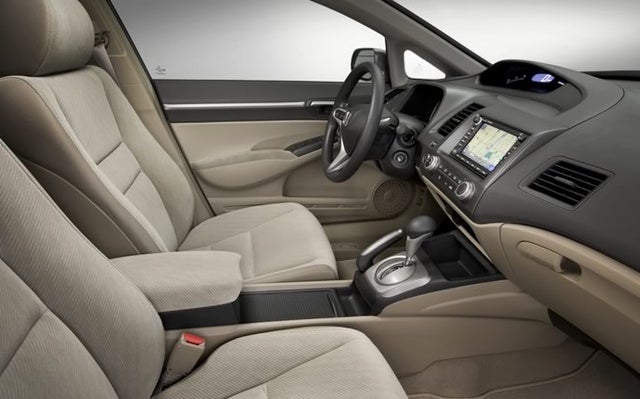 All 2010 Civic trims include such standard safety features as antilock brakes with electronic brakeforce distribution, while the EX, EX-L, Si, and Hybrid also include a Vehicle Stability Assist system with traction control. The IIHS named those Civic trims equipped with the Vehicle Stability Assist system a 2010 Top Safety Pick. The Civic also earned a top score of five stars out of five from the NHTSA for protecting the driver and front passenger in a front-end collision, and for protecting rear passengers in a side impact. It earned four starts for protecting the driver in a side impact, and also for protecting passengers in the event of a rollover. All Civics come equipped with dual-stage front, front side, and side curtain airbags. 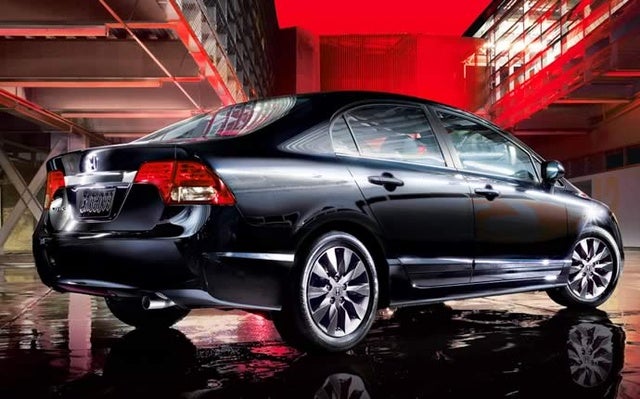 Owners find the Honda Civic fun to drive, with good fuel economy, interior comfort, and reliability. However, the Civic's performance receives mixed comments from owners. Some are satisfied with the Civic's acceleration and torque during daily around-town driving, while others would like better performance overall, and especially better acceleration off the mark. The steering wheel also feels light to some drivers.

The interior seems sparse to some, with a lack of gadgets, especially in the lower-end trims. Similarly, some owners are impressed with the Civic interior's overall fit and finish, while others find it a bit too plasticky. Seat comfort gets good marks from most owners, although some find the Si's seats too tight, due to their side bolsters. Owners single out the Si for its good performance, although some find the ride too harsh. Many owners comment on the noisy cabin and find the Civic too expensive for what it delivers. However, most give thumb's up to the Civic's exterior design.

SusieZam I bought this car for my 18 year old son in 2013 (2010 model with 40,000 miles.) He loves this car. I love it too. It maneuvers very easily. Although my son has only put an additional 25,000 miles on it, we have had NO car issues and have only had to change the oil and perform suggested mile maintenance. The only complaint I have is the front fender is so close to the ground that if there is a dip in the road, you cringe that your bumper will scrape it. That also goes for parking spot concrete blocks. My son has learned the hard way. Other than that, I give it two thumbs up and so does my son!

SusieZam We totally suggest this car for a teenage and college driver. It's economically priced, holds its value well, and has very good safety reviews.

Guru5K84S Excellent Mint condition. Garrage kept all the time. Brand new Tires, Brakes and Battery. One driver and Non Smoking. ONLY reason to sell is moving. No Fake Shipping Scam please. Only Cash or Cashier Check and this last firm price.

Users ranked 2010 Honda Civic against other cars which they drove/owned. Each ranking was based on 9 categories. Here is the summary of top rankings.

Have you driven a 2010 Honda Civic?
Rank This Car

How Much To Replace An Ac Compressor Clutch For 2010 Honda Civic?

I have a 2010 Honda Civic, It was running smoothly up till now, but the AC Compressor just destroyed itself this past Friday. Sounds like this is a honda civic common problem for the car? Either way...

Bill Of Sale Where Do I Find It?

I just sold my car but can't find the bill of sale in my profile, can you tell me where it is?

I have a 2010 honda civic with a 1.8l. I just replaced the old ac compressor due to a faulty clutch. The new compressor installed is a Denso. I am having an issue when the vehicle is idling and th...

I was driving on the freeway, and all of a sudden my Cruze control started fluctuating. Whole dash lit up, car shut down immediately, and the,dip stick is melted. My coolant is full, and oil is full ...