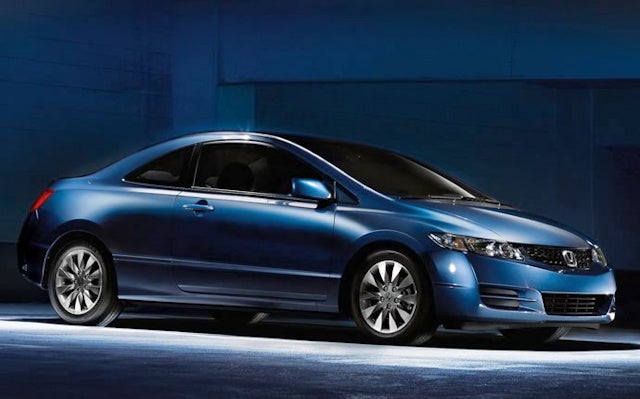 The 2010 Honda Civic Coupe offers impressive fuel economy and rigorous attention to detail in an attractive and affordable package.

The base engine in the 2010 Honda Civic Coupe offers good performance but poor presentation, with excessive noise only exacerbating the already pervasive road rumblings that already permeate the cabin. 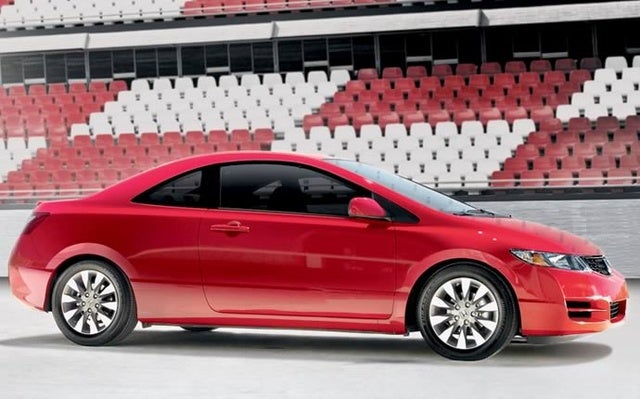 The Civic tries hard to be the vehicle that addresses all concerns, with its base DX trim taking up economy duty, the mid-level EX trims offering a bit of luxury, and the Si flexing some meager muscle. Some of these accomplish their intended goals better than others, notably the Si, while the EX trims are still stuck with all the negatives - unrefined engine and poor noise dampening - of the lower trim. Still, there’s been much improvement in the Civic over the last three decades, and Honda is sure to continue that trend.

For more than 35 years, the two-door, front-wheel-drive Honda Civic Coupe has been gracing American shores. Only the Corolla tops it among Japanese models in continuous production. A slight model refresh in 2009 means no changes for 2010, and the five-trim Civic Coupe continues to be available with two engines and three transmissions across the lineup, from the base DX to the sporty Si. 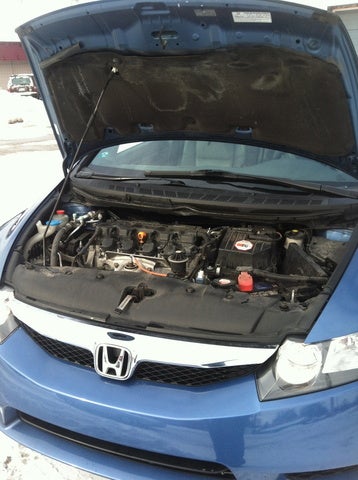 All Coupe trims other than the Si come equipped with a 140-hp, 1.8-liter inline four-cylinder (I4) engine, with the buyer’s choice of a five-speed manual or automatic transmission. These cars are sluggish away from the line with either transmission, but competent at speed, even for passing maneuvers. The EX-L additionally comes with traction control. Manually equipped Civics with the 1.8 have returned an EPA estimate of 26/34 mpg, while the automatic transmission does better on the highway and worse around town at 25/36, all on regular-grade gasoline.

The Si gets a 2.0-liter inline four good for 197 hp, making it a strong performer in all situations, as long as the rev-happy engine is kept fed with a healthy dose of the right foot. The six-speed manual is the sole offering, praised for its smooth operation, and even with the extra power the Si still manages 21/29, although this is with the required premium-grade gasoline. However, the Si also comes with traction control, a limited-slip differential, and an anti-skid system that along with the power more than compensate for the drop in efficiency from the remaining trims.

The Coupe suffers slightly in its ride, due to a small wheelbase and lightweight design, however it never loses its composure in a disturbing or alarming manner, you’ll just feel a lot of feedback from the road through to the steering wheel and chassis. The Si is the worst of the bunch, but again not enough to warrant much complaint among owners, especially those who chose the Si most likely for reasons other than the plush ride.

Handling for non-Si Coupes is at least standard for the class, suffering only minor lean and a steering response that is only slightly sluggish - expected for the class. The Si, however, handles with confidence, attacking corners with poise and halting quickly thanks to larger 11.8-inch front and 10.2-inch rear brake rotors.

Noise is an issue here, from both the road and the engine, although the latter at least is a positive in the Si, whose engine and exhaust have been tuned specifically to provide an aggressive note. Sadly, the rest can only be considered a negative, as road noise permeates the cabin of all trims, and the 1.8-liter engine’s coarse struggling under load is anything but pleasant.

The Civic’s original reputation for cheapness, understandable given its entry into the market, has given way to a quality that surpasses many in its class, with special note given to EX and Si trims, which gain an extra level of upscale feel, due to a higher grade of plastic and additional trim that impart a slightly luxury appeal in the EX and a sporty leaning in the Si. Likewise the controls in all trims are precise and well-placed, offering easy viewing and operation. The exception is the optional navigation system, which seems overly complicated and difficult to see in all but perfect conditions.

While front seats are comfortable and supportive (extremely supportive in the Si), taller drivers will have to take a pass, and the rear seats are seemingly designed for luggage and small pets alone. Entry and exit is painful at best for the back seat, and the seats provide little relief once passengers have been shoehorned in.

The 2010 Honda Civic Coupe comes with many safety features, including dual front, front-side, and curtain-side airbags, antilock brakes, a tire pressure monitor, and even daytime running lights coming standard on the DX trim. The EX additionally receives four-wheel disc brakes, and the EX-L gets an anti-skid system. The Si additionally receives upgraded brakes and a limited-slip differential.

Many complaints have been heard about the optional navigation system available on the 2010 Honda Civic Coupe EX and Si trims, which is hard to read and seems to overly complicate the relatively simple audio functions it absorbs. Excessive noise and a firm but not sporty ride mar the driving experience for non-Si trims.

What's your take on the 2010 Honda Civic Coupe?

Users ranked 2010 Honda Civic Coupe against other cars which they drove/owned. Each ranking was based on 9 categories. Here is the summary of top rankings.

Have you driven a 2010 Honda Civic Coupe?
Rank This Car

Anyone Have A/c Problems With Honda Civic?

We have two 2010 Honda Civics and have this problem with both of them! After the car sits for a while in the hot sun, the a/c won't work when you start the car. It does start working again after you d...

How Do I Make My Civic Without A Vtec Engine Faster ?

I’m new to the car customization. Barley got my first car just turned 18. I’m having a little difficulty trying to do some upgrades on my car without having to change my engine into a Vtec. My car ...

I Need A Door Lock Actuator For My Honda Civic LX Coupe. Is There A Differe...

Why Do I Have Over 170 Hits And Only Five Inquiries? The Car Is Exceptiona...

I Have A 2010 Honda Civic That Will Not Go In Gear Until You Push The Brake...