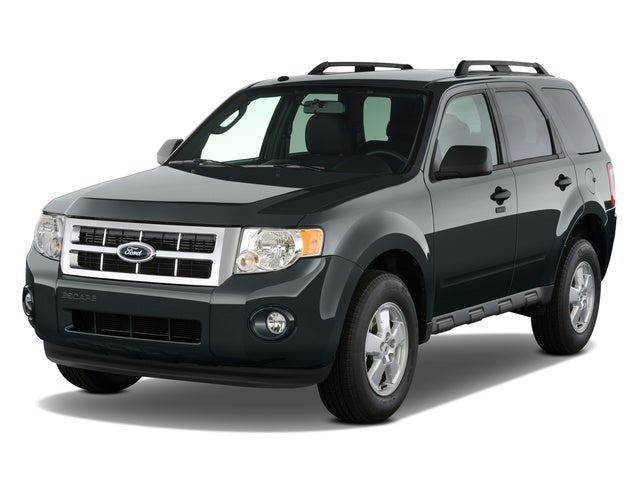 The 2010 Ford Escape offers a comfortable ride, better-than-adequate gas mileage, an eager and responsive V6, and a roomy interior.

Though not without its flaws, the 2010 Ford Escape is a family-friendly compact SUV offering safety, comfort, performance, and value without a lot of flash. The Escape’s thoughtful size makes it a comfortable fit both in the city and on the highway, while the available Intelligent 4WD ensures that weather will rarely be a problem. Before committing to the 2010 Escape, however, it might behoove car buyers to check out some of its competitors.

Of the Big Three U.S. automakers, Ford is the only one still financially independent, and the 2010 Ford Escape is one reason the carmaker continues to roll under its own power. This SUV loads enough standard features and options into its compact body to satisfy most families, gets better-than-average mileage for its class, features a respectable 66 cubic feet of cargo space with the rear seats folded, and rides on a sedan-inspired chassis that reduces (but doesn’t quite eliminate) the truck-like feeling common to most of the competition.

The 2010 Escape is offered in three trim levels, the base XLS, mid-level XLT, and top-end Limited. All three trims are available in either front-wheel-drive (FWD) or full-time four-wheel-drive (4WD) configurations, and all offer five-passenger seating and five doors, including the rear liftgate. Two engines and two transmissions are available for the higher trim levels, each of which received a significant performance upgrade in 2008. According to many reviewers, the Escape is in the running for the title of most fuel-efficient vehicle in its class.

Dated styling, however, as well as questionable cabin materials, tepid acceleration from its standard four-cylinder engine, and a lack of some common convenience features, such as rear-seat DVD entertainment and a power liftgate, may cause prospective car buyers to look beyond the Escape to the Chevy Equinox, Honda CR-V, Subaru Forester, or Toyota RAV4.

Yet Ford does enjoy a reputation for installing the latest technology in its vehicles, and the 2010 Escape is no exception, offering such options as the brand-new Auto Park system, which uses sensors to assist in parallel parking, and the new MyKey programmable ignition key that limits speed and audio volume when the kid borrows the car on prom night. The Escape also features a new-for-2010 rear-view camera system for added safety when backing up, as well as wider outside mirrors that eliminate blind spots. 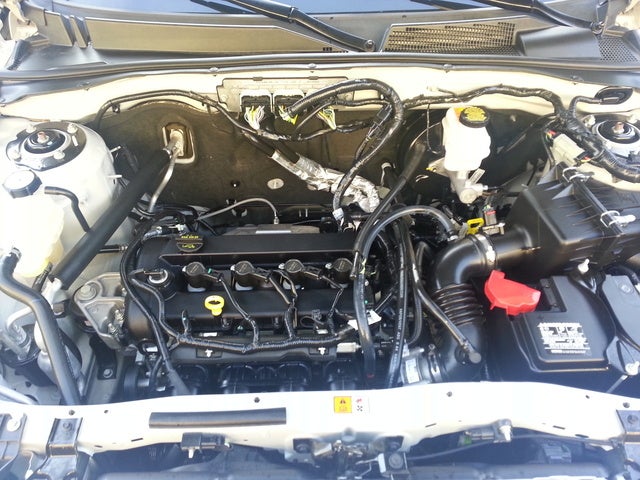 Packing a standard 2.5-liter DOHC inline four-cylinder (I4) engine and, for the base front-wheel-drive XLS, a five-speed manual transmission, the 2010 Ford Escape manages 171 hp at 6,000 rpm, and 171 lb-ft of torque at 4,500 rpm. All other trims, including the XLS AWD, are equipped with Ford’s highly regarded six-speed automatic. The 2.5-liter I4 is rated by the EPA at 22/28 mpg in the five-speed-manual-equipped FWD XLS, and 19/25 for AWD trims equipped with the six-speed automatic.

A peppy 3.0-liter DOHC Flex Fuel V6 engine is also available for the 2010 Escape XLT and Limited trim levels, managed by the standard six-speed automatic. This combo puts out a respectable 240 hp at 6,550 rpm, and 223 lb-ft of torque at 4,500 rpm, good enough to tow 3,500 pounds when properly equipped. The FFV (Flex Fuel Vehicle) V6 engine burns either regular unleaded gasoline or E85 ethanol fuel. The V6 is rated at 19/25 in the FWD configuration, and, of course, a bit less in AWD trims.

Reviewers describe the 2010 Escape’s 2.5-liter I4 as a bit tortoise-like off the line, but adequate on the highway with judicious use of the five-speed manual transmission. The available 3.0-liter V6, on the other hand, is lauded by professional reviewers as powerful and responsive in its acceleration, with the six-speed automatic providing nearly flawless shifts up and down the range.

Equipped with standard 16-inch wheels, a four-wheel independent suspension with MacPherson front struts, a front stabilizer bar, and a multi-link rear end, the 2010 Escape, though not the quietest compact SUV on the market, nevertheless provides a relatively smooth, alert, and comfortable ride, according to virtually all professional reviewers.

Cornering in the Escape is described as well-managed, with little body lean or noseplow, and road imperfections are taken in stride, even with the available 17-inch wheels offered with the XLT and Limited trims. Steering, however, is described by some reviewers as somewhat cumbersome at slow speeds, with a bit of float on the highway. Mounting front disc and rear drum brakes, the 2010 Escape is noted by more than a few reviewers as delivering a longer-than-average stopping distance.

Additionally, the Escape Intelligent 4WD trims, with a mechanical limited-slip center differential and full-time 4WD, offer go-in-the-snow capability. Keep in mind, however, that the 4WD Escape is not designed to be driven far from the beaten path.

In terms of technology, comfort, and convenience, Ford has traditionally been on the cutting edge, and the 2010 Ford Escape is no exception. The base XLS trim, for example, provides such standard amenities as cloth front bucket seats, split-folding rear seats, power windows, door locks, and mirrors, cruise, with wheel-mounted controls, air conditioning, tilt-wheel steering, a front storage console, and an MP3-capable single-CD player, with four speakers.

Options for the 2010 Escape XLS trims include the SYNC infotainment system, daytime running lights, and front and rear floor mats. A power moonroof, 40GB of music storage capability, remote start, a Class II towing package, and a universal remote garage door opener are available with the XLT trim level, and the Limited features an available Luxury Package, including a rear-view camera system, dual-zone front climate control, and a 320-watt, seven-speaker premium audio system. Additionally, chrome-clad 17-inch wheels are available for both the XLT and Limited trims.

Though noted by some reviewers as lacking a couple of the more common amenities, such as rear-seat DVD entertainment, a telescoping steering column, and rear-seat climate control, for example, the 2010 Ford Escape still provides plenty of standard and optional creature comforts to satisfy even the most discerning driver. Cabin space, including better-than-average head- and legroom, also draws favorable mention by nearly all professional reviewers.

One notable safety drawback to the 2010 Escape is its front-disc, rear-drum brake configuration. However, this small SUV still offers four-wheel ABS with electronic brakeforce distribution, traction and stability control, dual front side-mounted airbags, and front and rear head airbags. Additionally, daytime front fog/driving lights are standard on the XLT and Limited trims, optional with the XLS.

Reviewers and owners alike are impressed with the Escape’s crash-test scores, always a criterion for the discriminating buyer. The National Highway Traffic Safety Administration (NHTSA) gives the Escape five stars in driver and passenger front and side impact testing, as well as rear side impact protection. Additionally, the Insurance Institute for Highway Safety gives the 2010 Escape its highest rating of “good” for front and side impact protection.

Most owners of the 2010 Ford Escape profess their utmost devotion. Yet, there are a number of issues that Ford needs to address with this small SUV. Chintzy interior materials, a too-small fuel tank, noisy engines, and a poorly designed roof-rack top the list of owner complaints. The Escape’s elderly and (for some) truck-like styling are also a cause for owner dissatisfaction.

By and large, however, owners are pleased with the 2010 Escape’s comfortable ride, nimble handling, world-class technology, roominess, and cargo capacity. The Escape is also lauded for its zippy V6 and fuel-miserly I4, with additional kudos for such individual features as the near-perfect six-speed automatic transmission, Intelligent 4WD, leather upholstery, and easy-to-use SYNC system. An overwhelming number of owners also mention value as a huge part of the 2010 Escape’s appeal.

saskcat 2010 Escape xlt , awd, sun n sync, i4 auto - well Ive read a few reviews and pretty much confirm all Ive read. Not overly powerful, yet adequate, not overly loaded but enough options to keep me happy, not overly flashy but then neither an I, would like a little better mileage but then who wouldn't, so overall a very good purchase or value. also was thinking with many of these on road, parts should be plenty when time comes. lol.

Users ranked 2010 Ford Escape against other cars which they drove/owned. Each ranking was based on 9 categories. Here is the summary of top rankings.

Have you driven a 2010 Ford Escape?
Rank This Car

Has anyone seen this? The hinges that hold the glass in the rear lift gate have basically corroded into a powder and snapped. Ford of Canada will not cover it because it's not being recalled. In fac...

Why Does A/C Not Work When It's Hot Outside?

Not much detail beyond this... A/C only blows cold air below 78 degrees or so. Above that, it only blows out hot air.

When I hit 28k on my 2010 Escape I noticed the Check Engine light started to come on and stay on. Prior to getting this checked my Check Fuel Fill Door status was on my display. When explaining the ...

I took my 2010 ford escape to the shop to have the brakes fixed and the air conditioner fixed. He told me that he replaced the air compressor and it was blowing cold air. It worked for about 3 - 4...