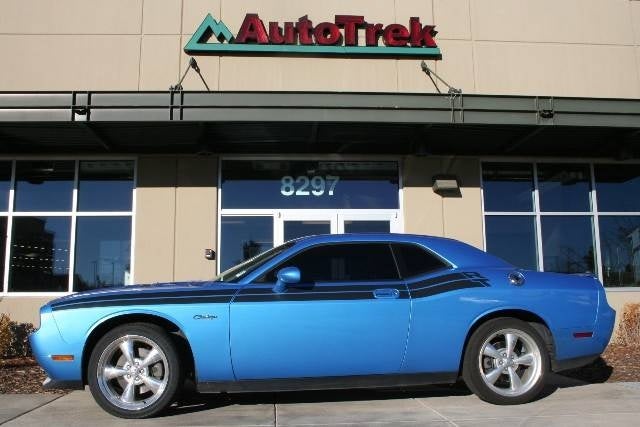 The classically designed 2010 Dodge Challenger five-passenger coupe is available in three trims, the base SE, the track-worthy R/T, and the muscle-flexing SRT8. While evoking images of a bygone era by delivering traditional Hemi V8 power in its two higher trims, the Challenger is a bit less powerful than the Chevy Camaro and a tad less refined than the Ford Mustang, both of which constitute its major competition. But the Challenger is, nevertheless, touted as providing a somewhat more practical driving experience - more touring than tearing – than its reprised rivals. Additionally, for 2010, this snappy coupe upgrades its SE trim with a standard five-speed automatic transmission and standard stability control, while additionally re-releasing the once-popular Plum Crazy and Detonator Yellow exterior colors.

Appearance, comfort, and convenience features for the Challenger are plentiful and backed up by a number of performance and convenience options. For the base SE, 17-inch alloy wheels, power windows, door locks, and mirrors, an eight-way power driver’s seat, a tilt/telescoping steering wheel, a split-folding rear seat, and an MP3-compatible single-CD player with four speakers are all standard equipment. The R/T adds 18-inch alloys, sport-tuned suspension and steering, interior ambient lighting, and a USB connection, as well as a leather-wrapped steering wheel and shift knob, while the SRT8 throws standard 20-inch alloys, notched-up sport tuning for the suspension and steering, and a dual hood scoop, plus Xenon headlights, leather upholstery, keyless ignition, six Boston Acoustics premium speakers, and UConnect/Bluetooth communications technology. Options, in the meantime, run the gamut from a power sunroof, premium audio, 18-inch wheels, the UConnect Media Center, and leather-trimmed upholstery for those trims that don’t already carry them, to digital music storage for the SRT8.

Owners of the debut ’09 Challenger are wild about its V8 acceleration and performance, but not so wild about gas mileage. The Challenger’s retro look makes nostalgia buffs of numerous owners, while its disturbing number of blind spots turns others into nervous wrecks when backing and turning. Other issues owners have with Dodge’s ’09 retro-coupe include the lack of springs on its hood, no rear entry on the driver’s side, and the bothersome manually adjustable front passenger seat. Yet the Challenger’s smooth, comfortable ride, sport-like handling, roomy rear seating, and huge trunk have the vast majority of owners either enjoying their youth or re-living it.

What's your take on the 2010 Dodge Challenger?

GuruC6B2M Who's looking for a better price? Talk to me!

Users ranked 2010 Dodge Challenger against other cars which they drove/owned. Each ranking was based on 9 categories. Here is the summary of top rankings.

Have you driven a 2010 Dodge Challenger?
Rank This Car

ABS And Brake Light On

Stereo Not Cutting On

my stereo just went black and won't cut on

I have a question, I purchased the Cland headlights for my 2010 Challenger..no bulb and I noticed it has 3 different plug connections. My vehicle just has 2 plugs what am I missing here..

Can I Used Roadlons To Purchese A Car

My 2010 Challenger Will Not Turn Over

My 2010 Dodge challenger will not turn over when I'm trying to start it. It seems very strong and continues to attempt to start but simply won't turn over. After about 15 to 20 minutes of trying to...

989 views with 7 answers (last answer about a year ago)