Sure, the Chrysler 300 sedan has faults, but it can still turn heads simply with its bold yet refined styling. Add to that a boatload of standard features, a smooth, comfortable ride, and the storied Hemi V8, as well as rear-wheel-drive performance, and the result is, well, an automobile of almost legendary beauty and comfort.

Traditionally a styling front runner, the Chrysler 300 Series has proven itself to be the quintessential throwback rear-wheel-drive automobile. The 2010 Chrysler 300 exhibits few overt changes from ‘09, with the exception of a few minor upgrades and re-arrangements to standard amenities and options packages, as well as the deletion of the LX trim level. Therefore, this five-passenger, full-size sedan, which shares its underpinnings with Dodge’s Charger sedan and Challenger coupe, is now presented in five trim levels, the base Touring, mid-level Limited, higher-end 300 C Hemi and 300 C AWD, as well as the potent SRT-8. Additionally, the 300 also offers buyers the choice of two Signature Packages for the Touring trim level and the Walter P. Chrysler Executive Series with the Touring and 300 C Hemi trims.

Despite some ugly rumors, the stretched Executive Series remains, as does the 300’s trademark eggcrate grille. A choice of four engines, including a monstrous 6.1-liter V8, is offered, as well as two automatic transmissions. Trunk space, of course, remains a cavernous 15.6 cubic feet, though something has got to be done about that pesky pint-size opening. The Touring Signature and Limited trims are offered in both rear-wheel-drive (RWD) and all-wheel-drive (AWD) configurations, while the 300 C AWD is, obviously, available only with AWD.

While the base Touring trim is touted as an elegant and economical family sedan, the 300 Touring Signature Series offers the 3.5-liter V6 engine, five-speed auto-manual transmission, and a softer suspension. The upscale 300 Executive Series, additionally, sports an extra 6 inches of body length, an optional fold-down table, and reclining rear seats, allowing the frugal boss to work or nap on the way to and from the office. Competition for the 2010 Chrysler 300 includes Ford’s Taurus, the Toyota Avalon, and the Pontiac G8, all worthy opponents. If, however, a rumored convertible 300 sedan comes to fruition, the 300 ought to once again dominate the market. 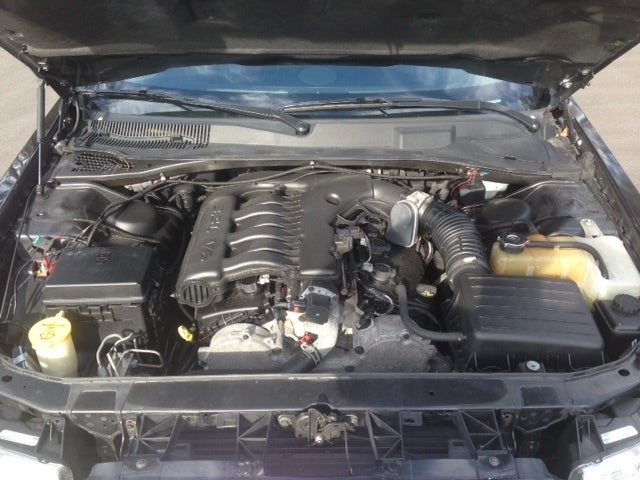 The base engine for the 2010 Chrysler 300 Touring is a 2.7-liter V6 that, when managed by the standard four-speed automatic transmission, puts out 178 hp at 5,500 rpm and 190 lb-ft of torque at 4,000 rpm. Though reasonably economical at 18/26 mpg, this small V6 is described by virtually all reviewers as lacking the oomph needed for decent acceleration.

Offered with the Touring Signature Series and standard in the 300 Limited trims is a 3.5-liter V6 with a four-speed automatic in rear-wheel-drive (RWD) configurations and a five-speed auto-manual transmission for all-wheel-drive (AWD) versions. This potent V6 offers 250 hp at 6,400 rpm and 250 lb-ft of torque at 3,800 rpm, to the tune of 17/25 for RWD and 17/23 in AWD versions. Reviewers find this powertrain to have at least adequate acceleration off the line and far better merging and passing capability than the 2.7-liter.

The 2010 300 C Hemi and 300 C AWD trims start flexing some serious muscle with a standard 360-hp, 5.7-liter Hemi V8 engine managed by the five-speed auto-manual transmission. This powerplant downloads 389 lb-ft of torque at 4,250 rpm, to the tune of 16/25 in the RWD C Hemi trim and 16/23 in the 300 C AWD. Equipped with Chrysler’s cylinder de-activation feature, which shuts down four of the engine’s cylinders at cruising speeds, the 5.7-liter Hemi V8 is noted by virtually all reviewers as eminently suitable to these weighty vehicles.

At the top of the engine food chain – in more ways than one – is the imposing 6.1-liter OHV V8 that powers the 2010 Chrysler 300 SRT-8. Teamed with the standard five-speed shiftable automatic transmission, this beast will pound out a whopping 425 hp at 6,000 rpm and 420 lb-ft of torque at 4,800 rpm. Alas, this voracious powerplant gulps gasoline at a prodigious 12/16. One test, however, found the 6.1-liter V8 to achieve 0-60 in just over 6 seconds. Not bad for a family sedan.

Reviewers find both the four- and five-speed automatics to be, for the most part, smooth and alert. Some reviewers, however, mention a disturbing lag in both transmissions when passing and merging. The auto-manual feature with the five-speed seems to mitigate, but not eliminate, this tendency.

Refined and stately, the 2010 Chrysler 300 has, since its inception, offered a smooth, if not exactly nimble, driving experience. A four-wheel independent suspension, front stabilizer bars, a short- and long-arm front suspension, and a multi-link rear end combine with standard 17-inch (Touring), and 18-inch wheels (Limited and 300 C trims) for tolerable acceptance of bumps and potholes. Even the SRT-8, with 20-inch wheels and a performance-tuned suspension, is notable for taking most road imperfections in stride. The 300’s AWD trims, as is normal, display less road composure than the traditionally softer-riding RWD versions, with one reviewer noting a bone-jarring series of thuds over potholed surfaces.

Professional reviewers, for the most part, describe the 300’s braking characteristics as powerful and straight, yet with a bit of sponginess to the pedal. Steering is noted as stable and true, with adequate grip in cornering and reasonable responsiveness in maneuvering twisty back roads.

The 2010 Chrysler 300 AWD trims, with a mechanical center differential, offer better-than-adequate traction in snow and mud. Taking an AWD 300 off-road is, of course, discouraged for obvious reasons.

Professional reviewers note that options for the 300 Series, while plentiful, are also pricey. Most reviewers find that a reasonably priced sedan doesn’t necessarily support the addition of thousands of dollars in optional features without a corresponding upgrade to cabin materials and workmanship.

Safety features for the 2010 Chrysler 300 Touring and Limited trims, though adequate, are not an especially notable advantage to the car. Four-wheel disc ABS and advanced multi-stage front airbags are the only standard safety items of any significance, while the ESP-based traction and stability control is optional on the Touring and standard with all other trims. Dual front side-mounted airbags and front and rear airbags are available for all trims, as are such delicacies as dusk-sensing headlights, front fog/driving lights, rear parking-assist sensors, and a remote anti-theft alarm system.

Due to a dearth of owner comments regarding the 2010 Chrysler 300, some comments about the ’09 300 Series will have to suffice. First, virtually all owners are captivated by the 300’s bold-yet-elegant styling and RWD performance, however, many owners are frustrated with the car's sluggishness when equipped with the 2.7-liter V6 engine. Owners also laud the 300’s ride comfort, V8 power, and plentiful standard features, while asking that more optional features become standard. A spongy brake pedal, small trunk opening, and the lack of a rear-view camera system confounds owners, while the available Bose and Kicker audio systems, five-speed auto-manual transmission, and ride comfort offered by the ’09 Chrysler 300 Series are praised.

Several owners of the ’09 Chrysler 300 Series complain of reliability and quality issues, leading to negative comments regarding warranty coverage. This is probably not surprising for a company teetering on the edge of bankruptcy. On the positive side, most owners report complete satisfaction with the value they receive from their choice of the Chrysler 300.

Users ranked 2010 Chrysler 300 against other cars which they drove/owned. Each ranking was based on 9 categories. Here is the summary of top rankings.

I just bought a 2010 Chrysler 300 Touring Signature series. I tried to transfer the satellite service from my old(er) truck and I can't seem to find the Satellite radio button. I have FM1, FM2, FM3....

Lost The Key Fob To My Car, Anyway To Start Car. Can Security Be Bypassed?

Lost the key fob while up in the mountains.have a regular key w/o fob can't start engine

Why Is Car Making Noise?

What could be making a noise "like" something hitting the fan & stops then starts up again? engine runs smooth, not missing, temperature is fine, just had oil changed.

I have a 2010 Chrysler 300 it wont start it has power no lights from the engine nothing and the pod won't come out of the ignition steering wheel is not locked and car is all the way in park can a...

114 views with 2 answers (last answer about a year ago)