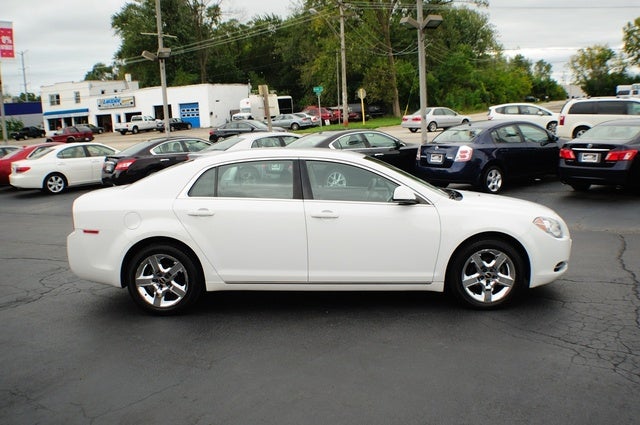 The 2010 Chevrolet Malibu features loads of standard creature comforts, a sedate, comfortable, and tolerably roomy cabin, and the choice of a gas-miserly four-cylinder engine or a peppy V6, along with a standard six-speed auto-manual transmission on the LT trims.

A dearth of standard amenities common to some of the competition, poor rear visibility, cramped rear seating, and some less-than-stellar cabin materials indicate the Malibu is due for an expected makeover.

For 2010, Chevy got it right with the midsize Malibu sedan. This well-conceived auto looks good, runs well, and handles the commute as well as the trip to visit grandma with equal efficiency and style. Definitely worth a good long look.

Considered one of the best values in the midsize sedan market, the 2010 Chevrolet Malibu just keeps on rolling. Since its inception in the mid-1960s, the Malibu has seen solid sales based on reliable performance, popular features, and tested design. With the deletion of the Pontiac and Saturn brands from GM’s lineup, the Malibu remains the automaker’s only entry in this dog-eat-dog segment. Because of an anticipated major redesign for 2012, the 2010 Malibu sees few changes from ’09 and will probably stand pat for 2011 as well.

The 2010 Malibu is available in four trim levels, the base LS, mid-level LT and LT2, and the top-shelf LTZ. All trims are delivered in front-wheel drive only, with a standard inline four-cylinder (I4) engine. The Malibu LS offers a four-speed automatic transmission, standard, while as of 2010, the LT, LT2, and LTZ now feature a standard six-speed auto-manual transmission that gets a bit better mileage. The LT2 and LTZ trims also offer an available V6 engine. A number of reviewers have suggested that those interested in the 2010 Malibu consider stepping up from the LS to the LT trim just for the standard six-speed automatic.

Interestingly, GM has decided to drop the Malibu Hybrid trim for 2010 due to lagging sales of its 2009 hybrids and an inability to generate significant profit. However, the gasoline-powered 2.4-liter engine gets some 22/33 mpg when combined with the six-speed automatic transmission, pretty close to the figures for the single-mode ’09 Malibu Hybrid (26/34). 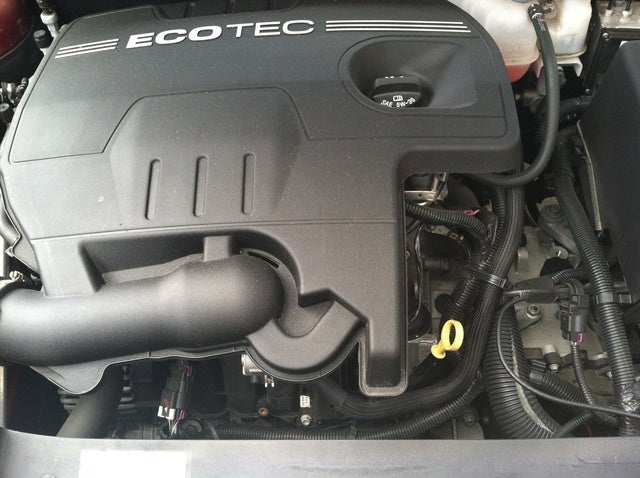 A 2.4-liter DOHC variable-valve-timed (VVT) inline four-cylinder (I4) engine is the standard powerplant for the 2010 Chevy Malibu lineup. The standard transmission for the LS trim is a four-speed automatic, while all other trims get the considerably more fuel-efficient six-speed auto-manual transmission. Putting out 169 hp (6,400 rpm) and 158 lb-ft of torque (4,500 rpm), the I4 is rated at 22/30 with the four-speed automatic, and 22/33 with the six-speed auto-manual.

Most professional reviewers note that the 2.4-liter I4, while not particularly quick off the line, nevertheless gets up to speed effortlessly. A time of 9.5 seconds was noted from 0-60 with the I4 powerplant. On the other hand, reviewers found the 0-60 time of 6.7 seconds reported with the 3.6-liter V6 to be near the top of its class. The four-speed automatic transmission is described as smooth and accurate, with the six-speed being called generally competent, but apt to be caught napping at times when shifting is necessary.

Featuring a four-wheel independent suspension with MacPherson front struts, front and rear stabilizer bars, and a multilink rear, the 2010 Malibu takes most bumps and potholes with aplomb. The LS, LT, and LT2 trims all roll on standard 17-inch wheels, while the LTZ is delivered with 18-inch polished aluminum wheels, which are optional on the LT2. Most reviewers feel the 18-inch tires, being a tad wider, don’t take to road imperfections quite as well as the 17-inchers.

The Malibu’s steering and handling characteristics depend on engine choice, with I4-equipped trims depending on electrically operated power steering and V6 trims carrying the beefier hydraulic systems, though body lean is taken in stride by both systems. Typically, the electric power-steering units prove somewhat better for maneuvering at slower speeds, while the hydraulic systems provide a better feel in cornering. The wider 18-inch tires, though they give a harsher ride, are said to grip tight corners a bit better.

Overall, reviewers are pleased with the Malibu’s yin/yang as far as ride and handling are concerned. Such words as “supple” and “cushy” are bandied about freely when reviewers describe the Malibu’s maneuverability and ride comfort. One can only hope that an all-wheel-drive trim may be in the offing soon.

Though lacking few standard or optional goodies, the 2010 Chevy Malibu disappoints a few professional reviewers in not offering such amenities as GPS-based navigation, satellite traffic information, and heated outside mirrors. These oversights, however, seem to be somewhat mitigated by what it does offer, such as a reasonably large (15.1-cubic-foot) trunk and well-insulated cabin, not to mention a manageable base price.

Options range from floor mats and Bluetooth technology in the LS trim to a power-operated sunroof, remote start, and rear 110-volt outlet in the LT to a 210-watt, eight-speaker premium audio system, 18-inch polished aluminum wheels, and dual exhaust tips for the LT2 and LTZ trims. A dealer-installed rear-seat DVD entertainment system is also available with the LT2 and LTZ trim levels.

The National Highway Traffic Safety Administration (NHTSA) gives the 2010 Malibu five stars across the board for impact testing scores and four stars in rollover protection tests. The Insurance Institute for Highway Safety (IIHS), while lacking information regarding the 2010 trims, gives the ’09 Malibu its highest rating of “good” for both front- and side-impact protection.

Though owners of the 2010 Chevy Malibu are, for the most part, well-satisfied with their ride, a few issues have been raised. For instance, acceleration with the I4 engine could be better, at least from a stop, and mileage is mentioned as a bit of a problem with V6-equipped trims. The Malibu’s brakes seem to be problematic for more than a few owners, with at least two mentioning the need for brake service before six months of ownership. Irksome details, such as lackluster rear styling, poor rear-seat legroom, the lack of floor mats as standard equipment, and the use of some chintzy cabin materials, also disturbs numerous owners.

An overwhelming number of owners, however, feel that the 2010 Malibu offers outstanding value, great gas mileage with its I4 engine, superb acceleration with the V6, better-than-decent handling, and a comfortable, quiet ride. Such items as remote start, cabin styling, and front seat roominess have earned special praise.

What's your take on the 2010 Chevrolet Malibu?

Users ranked 2010 Chevrolet Malibu against other cars which they drove/owned. Each ranking was based on 9 categories. Here is the summary of top rankings.

Have you driven a 2010 Chevrolet Malibu?
Rank This Car

My Malibu 2010 Doesn't Start Up..but The Dashboard Lights Are On

I Want To Sell My Car

Replaced ECM And Car Started With No Relearn Process. Is This An Issue?

I have a 2010 Chevy Malibu. I just replaced the ECM, I provided my VIN to the company I purchased the part from. I went to do the Relearn process and my car started and no security lights came on ...

Car Will Turn But No Start

On my 2010 Chevy Malibu 2.4 flex fuel my car will turn but not start it's getting fuel. Replace all the spark plugs and still will start. had a mechanic come out and automatically he jumped to the ...