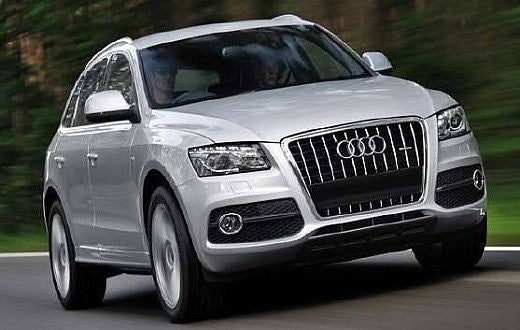 The 2010 Audi Q7 is a critics’ darling. The experts love how this luxury family SUV handles all types of road conditions, its refined cabin, immaculate construction and mechanics, comforting list of safety features, and optional turbodiesel engine. Sure, it has drawbacks, like a difficult-to-use third row and poor fuel efficiency for the gas-powered engines, but those hardly outweigh the highlights.

The Q7 receives some restyling for 2010 with a refreshed grille, headlights, bumpers, and paint color options. But the overall look stays the same, which is great according to some and not so much according to others. Proponents appreciate the imposing mass of the Q7 as a positive trait on an SUV and feel its arced roofline, muscular haunches, and touches of chrome complement the Q7’s bulk. Opponents take one look and see an ugly cargo hauler masquerading as a luxury civilian vehicle. We think you should you let your own tastes guide you. The 2010 Q7 also has an updated version of Audi’s Multi Media Interface (MMI), which controls the entertainment and information systems when the optional navigation system is purchased.

Three trim levels are available – the 3.6 Quattro Premium, 4.2 Quattro (with a Prestige level option package), and the TDI Quattro Premium. The 3.6 gets a 3.6-liter V6 engine, the 4.2 a 4.2-liter V8, and the TDI a 3-liter turbodiesel V6. All come with Audi’s Quattro All-Wheel Drive system, a six-speed automatic transmission, and a 6,600-pound maximum towing capacity.

Models with the V6 have a curb weight of 5,170 pounds, and the V8 models weigh in at 5,423 pounds. This mass is what drags down the Q7’s fuel efficiency and acceleration as well as opinions from critics. The copious torque provided by the TDI engine compensates for the Q7’s bulk and delivers plenty of juice at low speeds. Unlike many diesel engines, the Q7’s TDI is quiet, smooth, and doesn’t emit excessively foul exhaust fumes, much to the critics’ delight.

The Q7’s weight and height demand deceleration when taking tight corners, which some critics complain about, but what does one expect in a seven-passenger SUV? Aside from slightly slow acceleration and modest cornering body lean, testers thoroughly enjoy the Q7’s performance and ride.

Audi has honed its Quattro AWD system to perfection, which is useful when trying to handle the Q7’s 5,000-plus pounds on a slippery surface. The Servotronic steering varies the amount of steering assist given according to speed, giving the Q7 a steady feel on the highway and a light, maneuverable feel in the city. The high-performance brakes with six-piston front calipers and four-piston rear calipers provide consistent and confident stops. The standard independent steel spring suspension (double wishbone in the front, four-link in the rear) deliver a smooth ride, although the available 21-inch tires don’t handle road imperfections well. The available adjustable air suspension provides the smoothest Q7 experience.

Like the exterior, the Q7 interior gets refreshed for 2010. More chrome on the controls, a few extra touches of wood inlay, and ambient lighting for the doors give the cabin a more refined feel than previous models and most other options in the class. All Q7 trims come standard with Bluetooth, cruise control, dual-zone climate control, heated front seats, leather seating trim, trip computer, a power tailgate, and a 6-CD changer. Available features include heated rear seats and steering wheel, Bose surround sound, a navigation system, and a parking system with a rearview camera.

The front seats offer ample legroom and a wide range of configurations thanks to the flexible power adjustments, seat-height adjuster, and the tilt/telescoping steering wheel. The front is all-day comfortable, although some of the driver’s sightlines are blocked by the thick pillars. The standard 40/20/40 split second-row bench can slide fore and aft to allow for flexibility between passenger and cargo space, but it's probably best suited for two adults and not three. And the third row is a place only children should go.

The Q7 received the highest possible safety scores (five stars) from the federal government for driver and passenger safety in front crash tests and front- and rear-seat safety in side crash tests, and it got a four-star rollover rating.

Audi Q7 TDi 2010 I took my car in today for the recall. No check lights on. I picked it up and the AD blue refill light is on. It was last serviced on July 18 at the same place. Is it possible light...

479 views with 4 answers (last answer about a year ago)

Teenage driver is having problem backing up at night with no camera. Able to turn down dash lights which helps alot. How do you dim the radio brightness it does not dim with the dash light button.

I have a 3.0 Audi Q7 Quattro which went into the garage last week for cam cover gasket and replacement injector seals, today the emissions warning light has come on, could the repair work and the...