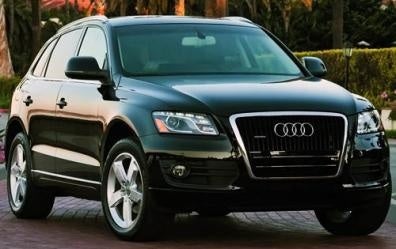 Based on the same platform as the Audi A4 sedan, the Q5 competes against such vehicles as the BMW X3, the Infiniti EX35, and the Lexus RX 350, as well as newer kids on the block like the Mercedes-Benz GLK and the Volvo XC60. The Q5 seats five passengers in two rows, and offers 19 cubic feet of cargo space with the rear seats up. With the rear seats folded flat, cargo space expands to 55 cubic feet.

The roomy interior features leather seats designed to keep passengers comfortable over long
distances, although three adults might feel a little cramped in the rear seat. The front seats feature 12-way power adjustment with four-way power lumbar adjustment and adjustable head restraints. Three-zone climate control, with separate controls for the driver and front passenger, as well as the rear-seat passengers, comes standard. Surfaces and appointments throughout the cabin have a high-quality feel, thanks to exemplary craftsmanship and ergonomics. For entertainment, the Audi Q5 comes equipped with a 180-watt, 10-speaker Audi concert radio sound system with a CD player, Sirius satellite radio, and an MP3 input jack.

Available Premium Plus and Prestige packages add a number of additional features, including memory settings for the driver's seat and an auto-dimming interior mirror with a compass. In addition, both packages add Bluetooth and the Homelink universal garage door opener, while the Prestige package also adds a Bang and Olufsen sound system and the Audi MMI navigation system, which includes a 7-inch color LCD screen, a 40-gigabyte hard drive, and Audi's MMI control logic, capable of generating 3D maps on the display screen.

Outside, the Q5 comes equipped with heated power mirrors, LED taillights, and aluminum roof rails with crossbars. The Premium Plus and Prestige packages add HID headlights and a power tailgate. The Q5 rides on 18-inch 10-spoke wheels, although Audi offers optional wheels up to 20 inches.

A 3.2-liter, direct-injected V6 powers the 2010 Q5. The DOHC, all-aluminum engine sends 265 hp through a six-speed Tiptronic automatic transmission, driving the Q5 from 0-60 in 6.8 seconds. The Q5 also comes standard with the latest version of Audi's Quattro permanent four-wheel-drive system, which splits torque 40/60 front-to-rear for optimal traction and stability on all types of road surfaces.

Ronnie I bought a jeep

Ronnie Happy with my jeep sahara

Looking For A Audi Q5 Or Qt With S-Line Package

Audi Q5 2010, 91000k, did 7th service and recently replaced engine mounts and gear mounts and sparks. Whilst driving the steering went stiff! Should the belt not have been checked by the service c...