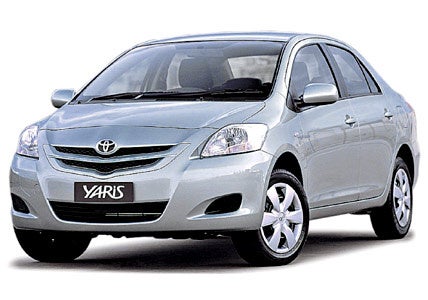 The no-frills 2009 Toyota Yaris comes with few standard features or available options, and its underpowered engine struggles during highway driving.

With available sedan and hatchback body styles, the 2009 Toyota Yaris offers an affordable and fun option for city drivers looking to optimize their fuel efficiency without sacrificing too much cabin comfort. Its roomy trunk easily converts the car from weekday commuter to weekend traveler, and its small size eases maneuverability and makes the most of a tiny engine. Keeping the pricetag low, however, means keeping the standard equipment list lean and lacking.

In an obvious attempt to keep up with the Honda Fit, the '09 Toyota Yaris adds a 5-door hatchback to its lineup, joining the 3-door version and the 4-door sedan. Toyota's smallest offering, the Yaris now offers more body styles than the other subcompacts in its class. While the sedan offers more in the way of passenger space, the hatchback offers cargo versatility. The front-wheel-drive Yaris makes an ideal city car, as its small size and nimble handling prove well-suited for tight parking spaces, and its superior fuel economy eases the pain of everyday commuting.

Both sedan and hatchbacks seat four, with the sedan measuring slightly larger in length and wheelbase. The Yaris is offered in either Base or S trims, both of which come sparsely equipped in order to keep the pricetag low. The S badge stands for Sport, which focuses mainly on appearance features such as larger wheels, foglights, body-colored moldings, sport seats, and various spoilers. Overall starting prices range from $12,200 to $15,800. However, adding the few available options causes sticker shock and puts the Yaris in a price range comparable to larger and better equipped cars. Drivers who prefer bells and whistles to fuel savings will want to look elsewhere.

Besides the new 5-door liftback, changes for 2009 focus on safety, with the Yaris adding standard ABS brakes and both side impact and side curtain airbags on all trims, bringing the total up to six airbags. The front and rear fascias receive some minor updating, along with the interior trim. Cruise control and satellite radio have been added to the options list, and a new iPod jack comes standard in S trims. 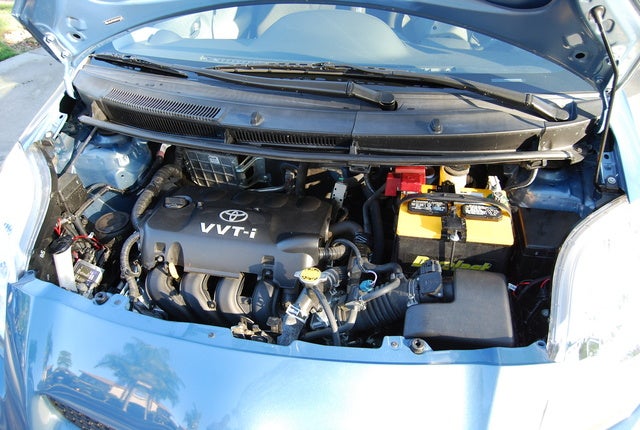 One powerplant fuels the '09 Yaris. A 16-valve DOHC 1.5-liter inline four delivers 106 hp and 103 lb-ft of torque at 4,200 RPM. It can be matched with either a 5-speed manual or 4-speed automatic. Equipped with variable valve timing, manual models get 29/36 mpg, while the automatics dip to 29/35. However, owners report fuel economy well into the 40s and compare the Yaris to the Prius in terms of fuel savings.

While no speedster, the '09 Yaris makes the most of its engine, due to the car's light weight and small size. It's 9.8-second 0-60 time bests the Honda Fit, and the Yaris proves to be a zippy little car around the city. Highway travel tests the acceleration power of the 4-banger and adds plenty of intrusive engine noise as the Yaris struggles to pass or climb uphill. Both transmissions perform smoothly, although earlier reviews of this same generation mention that the manual requires a lot of shifting to find the optimal power range.

Little has changed in the driving dynamics of the '09 Yaris. Its small size translates to a nimble maneuverability perfectly suited for city and commuter driving, and its tight turning radius helps negotiate small parking spaces. The Yaris employs an independent Macpherson strut front suspension and torsion beam rear suspension that is predictably soft and floaty, but also better at absorbing the bumps and dips in the road than most of its rivals'.

Recent test drives reveal the power steering to be surprisingly weighted and responsive, although reviews from 2008 found it too vague and lacking any driver feedback. Combined with its crisp handling, the Yaris exhibits a certain sporty edge, though it's nowhere near as fun as the Honda Fit. Its light weight, which enhances maneuverability, has drawbacks as well, particularly in the form of wind wander at high speeds. Although the Yaris doesn't require much horsepower to get up and go, the engine feels especially underpowered when trying to accelerate on the highway or negotiating climbs. Quiet in city driving, the engine amps up its volume at high speeds, hampering conversation in the cabin.

Base trims come with 14-inch wheels, while the S ups the size to 15 inches. One critic finds the tires too narrow to provide much road grip when cornering, however, they do not transmit much noise into the cabin. Brakes feel tight and responsive.

To keep things cheap, the '09 Yaris refuses to pack a lot of standard equipment into either the hatch or sedan. However, the Yaris does score points with owners for its surprisingly roomy interior, comfortable for both four passengers and a decent amount of cargo. Many owners comment that the '09 Yaris is deceptively bigger than it looks, particularly the more versatile hatchback.

Base hatchbacks get you from point A to B with few creature comforts. Air-conditioning, four-way manually adjustable front seats, a tilt steering wheel, and a front power outlet represent the bulk of the standard equipment. The sedan adds a tachometer. Oddly, Base trims feature four speakers, but no radio or CD player. These are available as options, along with power features, remote entry and the newly offered cruise control and satellite radio. Another odd no-show is a standard rear defogger, which can be bought as part of the Convenience Package. The S trims go for the sporty look on the outside (body kit, spoilers, color-keyed handles, larger 15-inch wheels), but also add the missing defogger, sport seats, leather trim for the steering wheel and shifter, and upgraded cloth seats. These trims also feature a CD/MP3 player and a new standard iPod jack.

The sedan measures nearly a foot and a half longer than both the 3-door and 5-door hatchbacks, coming in at 169 inches to the hatch's 150.6 inches. The hatchbacks have a slightly higher roofline, allowing about about an inch more headroom overall (39 front, 37 rear), although most owners say anyone over 6 feet tall will feel claustrophobic. Rear legroom remains tight in both body types, although front passengers can stretch out with an ample 40 inches in the hatch and 42 in the sedan. Access to the rear seats in the 3-door hatchback remains awkward, but the new 5-door solves this with its full-size rear doors.

Professional reviews praise the comfortable and supportive seats. Drivers sit up high for maximum visibility. However, most reviews mention that the steering wheel is mounted too far away from the driver and too highly placed, and the tilt function does little to optimize driving comfort. Some reviewers also find the pedals too close to the driver, forcing the knees up into the steering wheel. Easy-to-read gauges and controls sit in the center of the dash, rather than obscured behind the steering wheel, but their placement forces drivers to divert their eyes off the road in order to operate them. Both critics and owners find this distracting at first and say it takes time to adjust to the ergonomics. S trims feature amber Optitron electroluminescent gauges.

In the '09 Yaris hatchbacks, the rear seats split-fold flat 60/40 and also recline and slide fore and aft to accommodate passenger comfort or extra cargo. Sedans can add the folding seat as an option. At 13 cubic feet, the sedan's trunk impresses with its size for a subcompact, and the hatch's bay starts out at 9.3 cubic feet and expands to 26. Reviewers and owners single out the trunk size in both body styles as a highlight of the '09 Yaris. A cargo cover comes standard, with the option to add a net.

The sedan's trunk features storage in the spare tire well and has a wide opening and low load-in height, although the lid hinges do intrude on the interior space. Interior storage is generally good, but many compartments lack lids, causing items to slide around. Hatchbacks feature both a driver side and passenger side glove box, while the sedan gets a center armrest that doubles as a storage cubby. The plastics used in the interior feel cheap and easily breakable to most owners, although a few critics find the material quality superior to that in many economy cars.

The '09 Yaris adds standard ABS brakes on all trims, a nice surprise for an economy subcompact car. These supplement the front disc and rear drum brakes and come with electronic brakeforce distribution. Other new important safety features are the now standard side impact and side curtain airbags for both rows, joining the dual-stage dual front airbags. The Yaris receives a mixed bag of ratings in crash tests. The newly standard airbags improve its overall IIHS rating to Good. The NHTSA gives it four and five stars in frontal impacts, but only three in side tests. Rollover tests earn four stars.

Other handy safety features include a standard tire monitor, halogen headlamps, and daytime running lights on all trims but the Base sedan.

The '09 Yaris surprises owners, particularly as to how much they fall in love with their new economy subcompact. Praising its “cute” and “sexy” looks, drivers find the handling to be nimble and easily maneuverable, which makes parking a breeze. Other highlights include the roomy interior and cargo capacity in the hatchback and the fuel economy, which several owners claim nearly rivals that of the Prius. The generally smooth and comfortable ride gets low marks for the noisy engine and anemic highway power. Several drivers notice that with the air-conditioning on, the Yaris starts to shudder and rattle when stopped at a light for too long. Others lament the lack of standard features, such as power locks and windows, and criticize the bundled options that significantly raise the price.

Reviews of the '09 are not in from CarGurus owners, but those who own the 2008 Yaris make similar comments to 2009 owners elsewhere. High marks go to its cargo space (one owner fits his bike into his sedan), hybrid-like fuel efficiency, low pricetag, and smooth ride. Although most CarGurus drivers like its stylish looks, several criticize the Yaris for being ugly and uncool. Drivers also appreciate its tight cornering and go-kart maneuverability, claiming the '09 Yaris is more fun to drive than you think. Another attractive factor is Toyota's solid reputation for build quality and reliability. Downsides include the dash layout, the lack of standard features and options, a tendency for the Yaris to wander in high winds, and its underpowered engine.

Users ranked 2009 Toyota Yaris against other cars which they drove/owned. Each ranking was based on 9 categories. Here is the summary of top rankings.

Have you driven a 2009 Toyota Yaris?
Rank This Car

When Purchasing On-line With CarGurus Is The Delivery Charge Included

How To Reset A Blinking Maintenance Required Light?

quit running on highway new battery brought new fuel pump brought and new alterner brought and put on wont staying running after charge in battery go dead you have to charge battery all the time ...