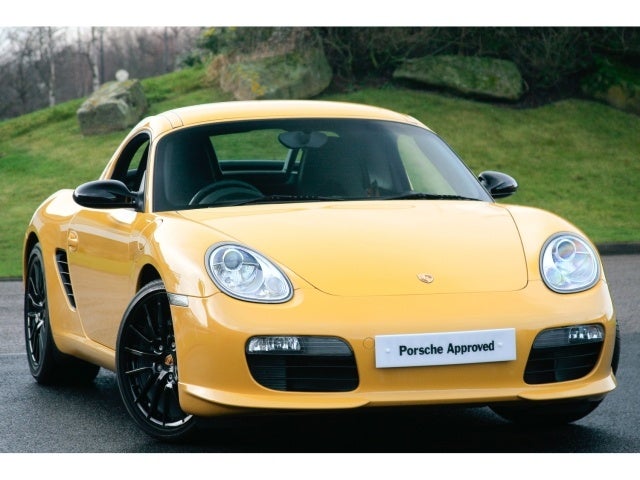 Porsche enthusiasts wanted a mid-engine roadster that was more economically friendly - and they got it in the Boxster. Knowing that if a little is good, more must be better, Porsche then heard calls for a hardtop version, with its increased structural rigidity and lower manufacturing cost - and these were answered in the Cayman. For 2009, the Cayman gets more power, more gears, and a slight visual update.

Available in two trim levels - Base and S - each gets its own, more powerful motor. The base engine has increased in both displacement and power, up from a 245-hp, 2.7-liter boxer six to 2.9 liters and 265 hp, respectively. The top-level, sport-inspired S trim simply gets a power upgrade, increasing to 320 hp from 2008’s 295. Both trims now come standard with a six-speed manual transmission, previously only optional on Base trims. A seven-speed automatic is also available, replacing the outgoing five-speed.

Visual changes are few but dramatic, with a revised front end, larger headlights, and new wheels. Available options include heated and cooled seats, a navigation system, and the popular Sport Chrono Package, which offers the ability for the driver to switch to “Sport” mode, adjusting settings throughout the vehicle to accommodate more spirited driving, although owners have noted this for making an otherwise pleasant and smooth ride excessively harsh.

Complaints have been heard regarding climate and audio controls, especially with the optional navigation system, which adds additional buttons that look far too similar for easy adjustment at speed. Space is sufficient, both in the cabin and in the dual trunks, but you’ll likely have to get creative with your packing.

EPA estimates have yet to be released with the new transmissions, but with some trims pushing 30 mpg on the highway and the addition of two extra gears in the automatic, not unimpressive numbers can be expected. Safety features including dual front airbags, traction control, electronic stability control, and three-point harnesses are all standard.

What's your take on the 2009 Porsche Cayman?

Have you driven a 2009 Porsche Cayman?
Rank This Car