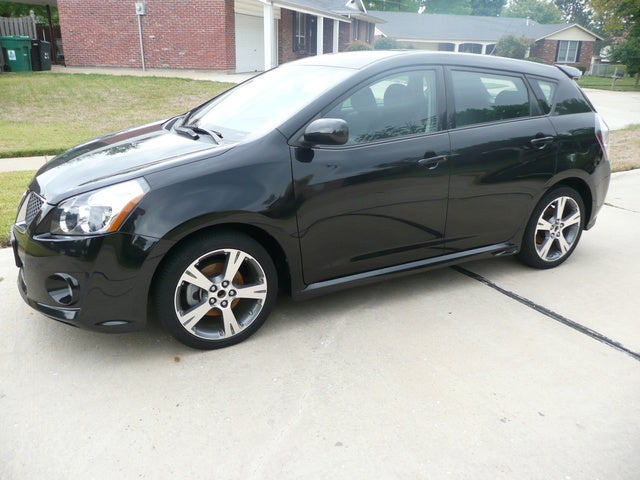 Looking for a Used Vibe in your area?

The 2009 Pontiac Vibe's roomy cabin and versatile cargo bay offer family-oriented practicality, while its distinctive sporty styling helps it stand out from its Toyota Matrix cousin.

A tiny back window causes major blind spots when reversing, and the '09 Vibe falls behind other sportier hatchbacks in terms of fuel economy and driving excitement. 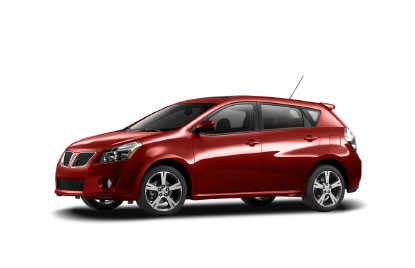 Those looking for a more affordable version of the Toyota Matrix will find the '09 Vibe fills that role perfectly. Good handling, decent power, a strong safety profile, and a spacious and utilitarian interior should satisfy a wide array of drivers, from parents to singles, suburbanites to city commuters. Distinguishing itself from its Toyota sibling, however, results in the lack of several key features and options and a significant rear visibility hazard.

Trying to distinguish itself further from the Toyota Matrix, with which it shares a platform and engineering, the 2009 Pontiac Vibe gets some exterior and interior redesign, most notably with its steeper raked windshield and smaller back window. Its improved sportier looks earn high marks from satisfied owners. The front-wheel-drive compact hatchback also gets a new, more powerful 2.4-liter engine and an AWD trim. To keep up, the old 1.8 four-cylinder also adds a few more horsepower.

Other changes include more cargo space (at the expense of some passenger space, in order to maintain the same dimensions as the 2008 model), improved electric power steering, more storage bins, and the addition of standard stability control and side curtain airbags to the safety equipment.

The '09 Vibe now comes in three trims – Base, AWD, and the sporty GT. The latter offers a sport suspension, sport seats, a 3-spoke steering wheel, leather trim, a rear spoiler, and a unique front fascia. The wagon seats up to five passengers, though four will fit most comfortably. The '09 Vibe stands out for its practicality and versatility, providing outstanding cargo and storage capacity and strong fuel efficiency for budget-minded commuters. Appealing to many economy buyers, the Vibe offers the reliability and reputation of Toyota engineering at the more affordable price of an America-made car. 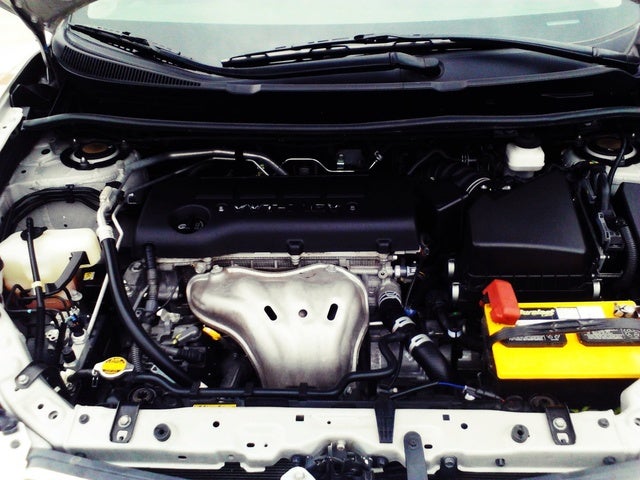 A much-needed power boost for the '09 Vibe comes in the form of a 16-valve, 2.4-liter DOHC inline-four engine, standard in the GT and AWD trims and optional for the Base. Paired with either a five-speed manual or five-speed automatic transmission, the engine delivers 158 hp and 162 lb-ft of torque over a nice wide range. The AWD trim comes only with a four-speed automatic. Fuel economy averages 21/28 mpg, with 0-60 times of around 8 seconds. No speed demon, the engine offers a more spirited and punchier ride, with strong acceleration and passing power on the highway.

Returning as the standard engine for the Base trim is the 16-valve, 1.8-liter DOHC inline four, with an output of 132 hp and 128 lb-ft of torque, both up about 6 points from the '08 Vibe. The new engine can be mated with a five-speed manual or four-speed automatic. Although decent for in-town and city commutes, most critics and owners agree that the powertrain feels somewhat anemic and noisy on the highway, especially with the automatic. However, many will be drawn to this engine for its 26/32 mpg. 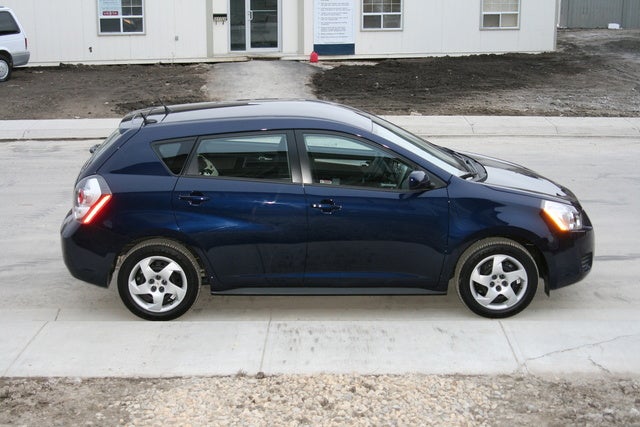 Riding on a Macpherson strut front and torsion beam rear suspension, the 2009 Pontiac Vibe delivers a fairly smooth, if somewhat soft and vague ride. The GT replaces the torsion beam with an independent rear suspension, sport-tuned for tighter control. Cornering improves, but so does the harshness of the ride, with several owners commenting negatively on its roughness over bumps in the road. Critics, however, notice little difference between the two suspensions. A newly reinforced steel unibody for 2009 supposedly reduces noise and vibration compared to last year's Vibe.

The Vibe's engine enhancements improve power and acceleration, but still fall far behind the dynamics and excitement of a Civic Si or Mazdaspeed3. Test drives reveal a quick-shifting five-speed automatic and manual transmission, but no one seems to like the outmoded four-speed automatic, which many say feels outmatched even by the 1.8 engine. The steering ratio exhibits surprisingly quick action, but test drivers find it less precise than the MAZDA3 hatchback's. The AWD system, though lacking in off-road performance, provides solid traction and road grip, as well as extra security for those living in icy and snowy climates.

Overall, test drivers find the '09 Vibe a practical, solid, and reliable car around town, with the GT adding some pleasing punch. Handling is decent, but nothing to write home about. Owners, on the other hand, praise its handling and maneuverability, with many finding their Vibe fun and sporty to drive. 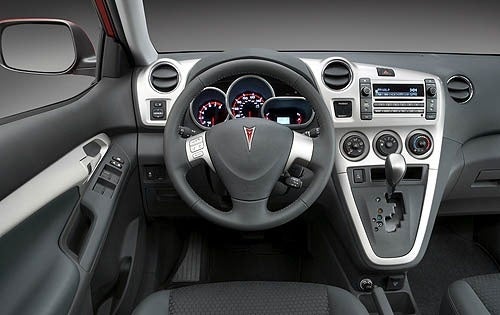 Built for cargo optimization, the '09 Vibe wagon holds a lot more than its compact size indicates, adding nearly a cubic foot of storage space over the 2008 model. Versatility and utility being its strong point (and a high point with owners), the cargo bay starts out holding 20 cubic feet and expands to 49.4 with the rear seats folded flat. For longer objects, the front passenger seat also conveniently folds flat. The fold-flat feature, often not seen in compact cars, pleases owners with its ease of storage and loading. The cargo area comes lined in plastic and features tiedowns and an optional cargo cover. Standard on all but the Base are flip-up dividers that create ready-made storage compartments and come with built-in nets and hooks. Another in-floor bin can hold wet or muddy items. A roof rack comes standard on the AWD trim.

Inside the cabin, the utility continues with plenty of storage cubbies, pockets, and consoles, along with a new twin glovebox large enough to hold a laptop computer. But the Vibe's accommodating spaciousness is not limited to storage alone. Passengers in front and back also get treated to roomy comfort, with decent elbow room for four adults. Legroom measures 41.6 inches up front and 36 in the back, and the 40 inches of headroom accommodates taller adults, although a slightly sloping rear roofline cuts off some height for back-seat riders.

The redesigned interior includes a more driver-oriented dash, which one critic likens to a more sports car-like layout. A high ride height and manually adjustable seat height, along with standard tilt and telescopic steering maximize driver comfort, and most owners comment on the supportive seats and well-laid out ergonomics. One downside seems to be the front headrests, which several owners say cause neck discomfort on longer trips. Opinion splits on the shifter placement, with some finding it easy to operate while others feel it lies too far away from the driver.

Though a new raked windshield improves frontward visibility, a small rear window and the disappearance of the rear side quarter windows significantly and dangerously hampers rear visibility. Most owners cite the blind spots when backing up as the number one drawback of the '09 Vibe.

Gauges and controls gain the faux silver metal accents from the Toyota Matrix, adding a bit more flair overall. The sportier GT goes one step further with leather upholstery and trim for the shifter and its three-spoke steering wheel. Despite the improvements, however, both critics and owners are less than wowed by the generally bland cabin. Many find the materials to be somewhat cheap and low-grade, with several owners reporting early breakage of interior parts.

Base trims for the '09 Vibe come oddly equipped. On the one hand, they surprisingly feature a CD player with XM satellite radio, power mirrors, and standard OnStar. On the other hand, they lack power locks and windows and air-conditioning. You have to move up to the AWD version to get the climate control, but only the GT offers full power features, along with cruise control, remote entry, wheel-mounted audio controls, sport seats, and a Monsoon sound system with MP3 input. Most of these items can be added as options to the other trims, and a sunroof is available for all but the Base. Critics and owners point out the noticeable lack of options for the Vibe, especially when compared to its Toyota cousin. Leather upholstery, power seats, and a navigation system are not offered, and many of the available options can be had only in an expensive package. The cost of adding these features found standard in many compact cars these days (air-conditioning, power locks and windows) boosts the Vibe's price significantly. 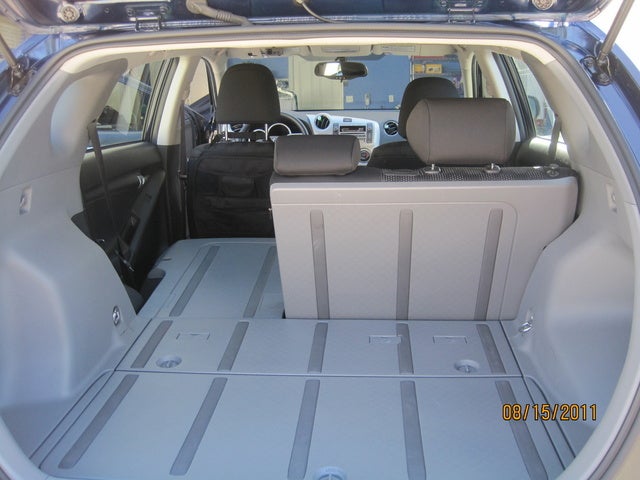 The redesigned 2009 Vibe has not yet been tested, but it comes standard with an impressive list of safety equipment for a compact economy car. Taking cues from its Toyota base, the Pontiac wagon takes traction and stability control and side curtain airbags off the options list and makes them standard for all trims. These join four-wheel disc and ABS brakes, dual front-side airbags, and front active head restraints. The improvements should boost last year's three and four-star crash test ratings. Also part of the package are automatic headlights, OnStar, and a tire monitor. Many current owners of the '09 Vibe cite its safety profile as a motivating factor in their purchase. 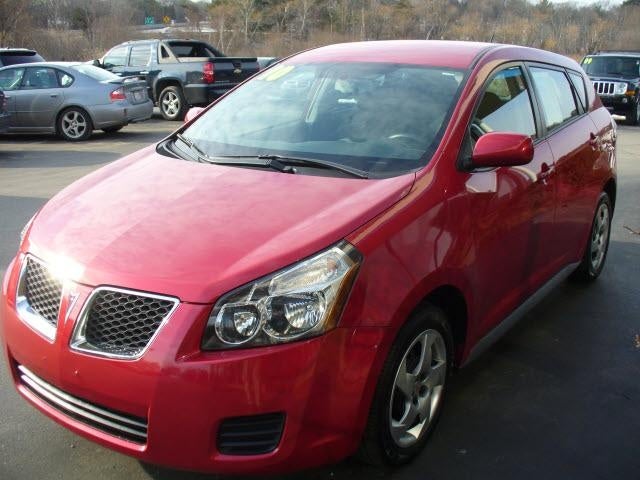 Owners rave about their '09 Vibe, particularly for its surprisingly roomy interior, superior cargo capacity, and wallet-happy fuel economy. They also like the improved sporty looks and peppiness of the new 2.4 engine, which makes the Vibe fast and fun. Good handling and maneuverability, the fold-flat rear seats, and the comfortable ride also earn high marks. The long list of safety features and Toyota-based reliability appeals to families, along with the affordability of this economic hatchback.

The biggest downside remains the poor rear visibility, but the use of cheap materials comes in a close second. Drivers report early wear and tear and part breakage, particularly with the hubcaps. A rough ride, uncomfortable headrests, and an awkward front armrest disappoint several owners. Most agree that the '09 Vibe lacks necessary options, such as power seats and a navigation system.

Only a few CarGurus owners have weighed in with their opinions on the redesigned '09 Vibe. They generally like the fast and energetic performance of the wagon, but dislike the underpowered 1.8-liter engine and the dangerous blind spots.

Users ranked 2009 Pontiac Vibe against other cars which they drove/owned. Each ranking was based on 9 categories. Here is the summary of top rankings.

Have you driven a 2009 Pontiac Vibe?
Rank This Car

Looking for a Used Vibe in your area?

Guru9C7RRC asked a 2009 Pontiac Vibe 2.4L Shopping & Pricing question about a year ago

Which Car Should I Buy? Mazda3 Vs. Pontiac Vibe

I have searched the internet and asked mechanics for days and nobody seems to have pics or clear description of how to remove the Serpentine belt. Just about every problem that could exist, does, ex...

971 views with 5 answers (last answer about a year ago)

I just recently put new gasket changed out fluid replaced bad hose only one was bad on O2 sensor and alternator battery good but when i put car in reverse ready to go all others gears are fine as w...

Why Did My VSC, Anti-skid And Check Engine Come On?

My anti-skid, VSC, and check engine are on and staying on ... The diagnosis on the check engine is Po335 crankshaft position sensor malfunction. Is this related to the traction lights? I don't know...