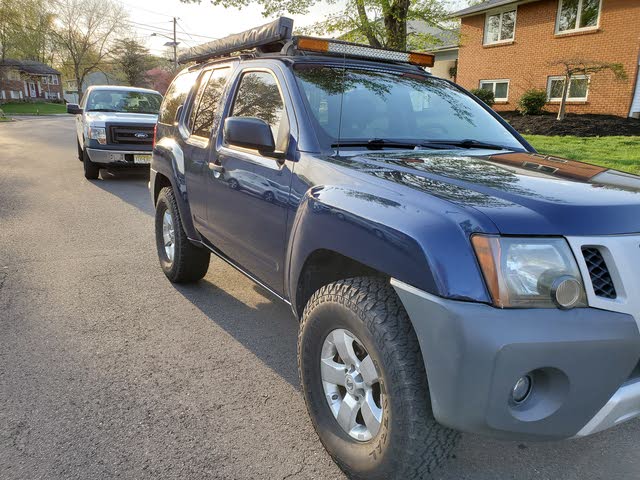 New styling and molding bits will give Nissan's Xterra a slightly new look for 2009, and the inclusion of standard side-curtain airbags with rollover deployment is a welcome addition.

With all the small changes and additions made to the Xterra over the years, we’d hope they’d have improved the interior by now, with regard to either fit or finish, but sadly it remains just as dismal as its gas mileage.

For those who don’t need to go as far as the Pathfinder, the Xterra is a good option for a smaller SUV with V6 power that still sports a full frame. Make sure to get the running boards to help with entry and exit, and don’t expect either car handling or fuel efficiency.

The Pathfinder’s little brother Xterra gets a slight cosmetic upgrade as well as standard side curtain airbags with rollover deployment across all seven trims. Available in either rear-wheel or part-time four-wheel drive, the Xterra seats five and is off-road capable.

While it's a smaller SUV, the Xterra comes with a V6 and a full frame. With four trim levels, buyers can choose anything from the spartan X to the upscale SE or the aggressively utilitarian Offroad. 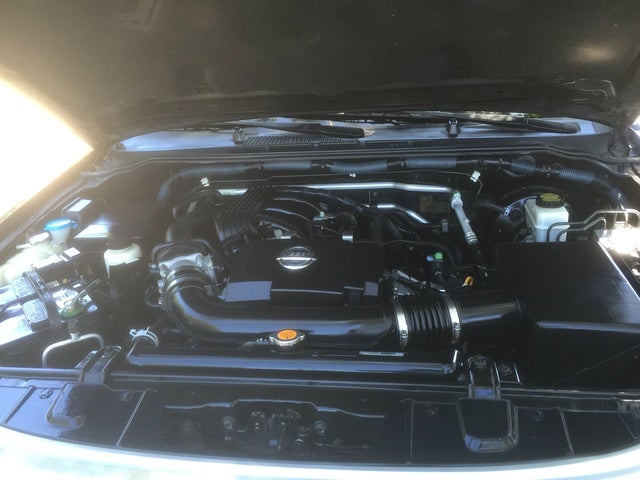 All seven trims of the Xterra come with a 4.0-liter, 261-hp V6 that produces 281 lb-ft of torque at 4,000 RPM. A six-speed manual transmission comes standard on X, S, and Offroad trims, with the option of a five-speed automatic that comes standard on the SE. Rated at 16/20 mpg for the manual and 14/20 for the automatic with the recommended regular-grade gasoline, the Xterra has more than adequate acceleration from a stop, although passing can become a long process. The engine is loud, especially past 4,000 RPM, but not altogether unpleasantly so.

All trims are available in either rear-wheel or part-time four-wheel drive, excepting the Offroad, which comes only in 4WD. With a low-range gear for proper off-roading, the 4WD system should not be left engaged on dry pavement. Maximum towing capacity is 5,000 pounds.

The Xterra’s short wheelbase and off-road suspension put two strikes against it before even turning the key. Unlike many of the smaller SUVs out there, which have traded in their truck roots for four-cylinder engines, car suspensions, and unibody design, the Xterra is still a truck at heart, and handles like one. You’ll feel every rut, ripple, and ridge in the pavement, big bumps will induce some wheel hop, and sharp curves will have the tall vehicle leaning over.

While braking power doesn’t instill extreme confidence, it isn’t lacking in any respect. Similarly, the steering could be more responsive, but is pleasantly progressive, if a bit stiff during a refreshingly tight turn.

As is often the case with vehicles trying to portray the “tough guy” image, the Xterra suffers from a seeming lack of consideration for the interior, with regard to materials and finish. While most controls are easy to reach and intuitive to use, the abundant hard plastic surfaces take away from the overall enjoyment of just sitting in the thing. Some reviewers noticed rattles and uneven surfaces even in new vehicles, and special criticism has been heard regarding the steering-wheel controls, which are difficult to see in even direct light and impossible to distinguish at night.

While roomy, some additional options for seat adjustments would benefit taller drivers. Because the Xterra leans a bit in turns, lateral support could also be increased, although it would be just fine otherwise. Similarly, additional cushioning would make long-distance trips much more tolerable in both the front and back seats. Space in the rear follows the lead of the front with adequate head and foot space, but slightly limited legroom. Choose the optional running boards to combat difficulty entering and exiting the rather tall Xterra.

The X trim comes with air-conditioning, a tilt steering wheel, privacy glass, power mirrors, windows, and locks, and an AM/FM/CD player. The S trim adds power adjustments to the driver’s seat, an interior air filter, and running boards, while the Offroad trim gets a leather-wrapped steering wheel, compass, automatic day/night rearview mirror, and a passenger seat that folds flat. The SE is an upgrade from the S and also gets a leather-wrapped steering wheel, compass, fold-flat passenger seat, and automatic day/night rearview mirror, as well as leather upholstery, illuminated visor mirrors, and a trip computer.

All Xterra trims come standard with dual front, front side, and curtain side airbags with rollover deployment, as well as front-seat active head restraints that work to combat neck injuries in accidents. Further safety features include four-wheel antilock disc brakes, an anti-skid system, and a tire pressure monitoring system.

The Xterra received four stars for both driver and passenger frontal impact in NHTSA tests, and three stars for rollover and rollover resistance.

The Xterra has been a very successful little brother to the Pathfinder, despite the drawbacks of being smaller. Little complaints abound, with regard to fit and finish and overall comfort, but given the degree of these complaints, they hardly seem to weigh against the enjoyment and utility of this smaller SUV that is still, essentially, a truck.

Have you driven a 2009 Nissan Xterra?
Rank This Car

2009 Nissan Exterra shut down while driving on Monday it was -1 degree out. I had vehicle towed. Garage said no oil in vehicle.. No leaking oil or I would have noticed.. No sensor light ever came ...

Hi I have a 2009 Nissan Xterra and my windshield wipers stop working. I just when out one morning and turn it on and nothing. They was working great the day before. All the functions on the multi- fun...

Recently we've had very cold weather in PA. The last two mornings when it was 10 deg or less the heater fan wouldn't work. The first morning it began working after I drove for about an hour. The s...