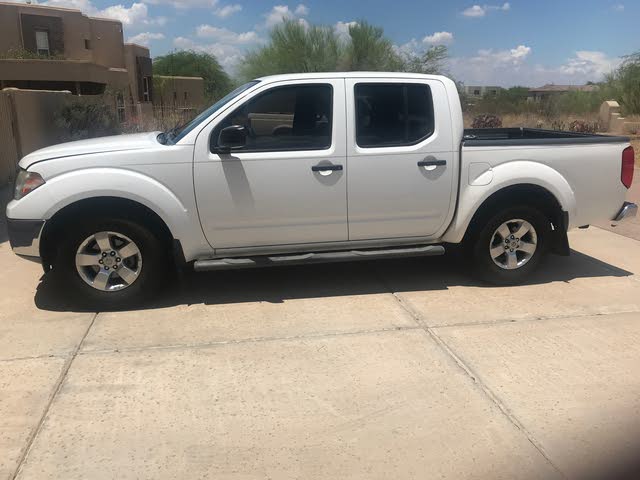 With utility and power akin to a larger truck's, but fuel efficiency and ride comfort more like a sedan's, the 2009 Frontier offers something for every type of driver, whether put to work as a family hauler or weekend warrior. Interior refinement and a roomy cabin work well for city commuters, but good off-road performance and flexible storage capacity transform the Frontier into a more rugged pickup. And two engine options let you choose between power and fuel efficiency.

Dubbed a mini-Titan, the 2009 Nissan Frontier returns this year with a minor facelift, a new trim, and some new bundled options. Available in both rear- and all-wheel drive, this compact pickup has maintained a strong following in its ten years on the market, thanks to solid performance both on and off road, utilitarian versatility, and interior comfort. It offers large-truck function with small-truck cost and fuel efficiency.

The Frontier comes in extended King Cab and four-door Crew Cab versions, with a choice of a 5- or 6-foot pickup bed. The Crew Cab features the shorter bed to accommodate a larger cabin and four full-size doors, while the King comes with jump seats and smaller, reverse-opening rear doors. Both versions come in SE and LE trims, with a base XE offered only with the King Cab. New for 2009, the PRO-4X off-road trim comes equipped with skid plates, 16-inch alloy wheels with off-road trail tires, larger Bilstein shocks, and an electronic rear locking differential. On the outside, it gets body-colored bumpers and grille and foglights, while the interior of the PRO-4X dresses things up with unique leather trim with red stitching and chrome accents for the gauges and controls.

Other additions for 2009 include a new Titan-like angular design for the grille, new headlights, and new wheels – standard 16-inch alloys for the SE and optional 18-inchers for the luxury LE (the base XE rides on 15-inch wheels). Red Brick and Navy Blue join the color options. Leather upholstery and a 10-speaker Fosgate sound system join the options list, along with a new Value Truck Package. This bundle adds most of the high-end features found in the LE and PRO-4X, such as leather trim, heated seats and mirrors, power front seats, and cruise control. 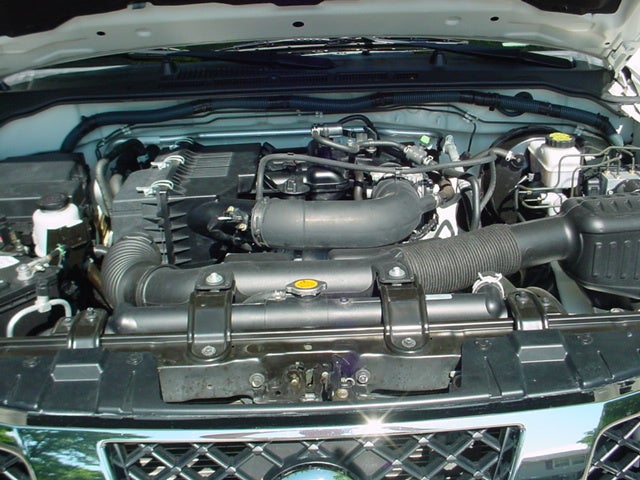 Two engines power the compact '09 Frontier. Rear-wheel-drive King Cab XE and SE trims carry a 2.5-liter DOHC inline four, which delivers 152 hp and 171 lb-ft of torque at 4,400 RPM. XE trims feature a 5-speed manual only, while the SE has a choice of the manual or a five-speed automatic. The powertrain averages 15/22 mpg and can tow up to 3,500 pounds.

All Crew Cabs, the King Cab LE, and all AWD trims get the more powerful 4.0-liter DOHC V6 engine, the same one found in the 350Z, but tuned for truck functionality. Nissan claims it leads the segment in both horsepower and torque, with 261 hp and 281 lb-ft at 4,000 RPM. When properly equipped, it can tow 6,500 pounds, also a chart-topper for compact trucks. However, mpg ratings dip to 14/19, disappointing for a compact truck. The V6-equipped SE trim gets paired with either a six-speed manual or five-speed automatic, while the LE and PRO-4X come only with the automatic transmission.

The four-cylinder provides decent power for around-town use and the light-duty chores common to the average commuter truck owner. Test drives reveal some off-the-line struggle and noise with the four-banger, although it seems to settle into its power range nicely once on the highway. However, for those needing true hauling power and confident highway and passing acceleration, the V6 offers more than enough power and low-end torque. The trade-off comes in the form of lower fuel economy. Critics find both the manual and automatic transmissions offer quick and responsive shifting.

The rear-wheel-drive '09 Frontier not only shares its looks with the larger Titan, it also rides on its F-Alpha box ladder frame, with a body made of lightweight yet rugged high-tensile steel. The double wishbone front and solid live axle rear suspension with leaf coil springs definitely rides like a truck, but a 125.9-inch wheelbase and short overhangs provide a solid and stable feel on city streets and winding roads.

Despite its truck underpinnings, test drivers and owners agree that little harshness transfers to the cabin, and the '09 Frontier delivers a smooth and comfortable ride. One reviewer praises its precise steering, saying the speed-sensitive rack-and-pinion system feels light around town, but adds weight and more driver feedback on the highway. The small size of the Frontier minimizes body roll, but it does noticeably increase as the payload increases. Despite its size, the Frontier does disappoint owners with its wide turning radius.

The Frontier shines in off-road performance, with confident traction and road grip, particularly with the PRO-4X's off-road trail tires and nearly 10 inches of ground clearance. The AWD shift-on-the-fly system features three settings for optimal traction and torque distribution. It defaults to rear-wheel drive, but can be set to 4Hi and 4Lo depending on the road situation. The PRO-4X comes with an electronic rear locking differential and a limited-slip differential for both rear- and all-wheel-drive settings. The result is top-notch off-road capability that, though most owners will never have a need for it, offers an extra touch of versatility in this compact truck.

Critics and owners find the cabin of the 2009 Frontier exceptionally roomy, with a driver-oriented focus. Crew Cab versions, with their four regular-size doors and regular rear seats, fit four people relatively comfortably, although tall adults on long trips may find the back seat cramped. No adults will want to sit in the back of a King Cab, outfitted with fold-down jump seats and only 25 inches of legroom (8 inches less than the Crew Cab). Children will barely feel comfortable back here, and most owners agree that the seats work best folded down for extra cargo space. The King Cab's rear doors are half-size and open at a reverse angle.

Drivers say the controls are easy to reach and easy to read, featuring nice large buttons that even a gloved hand can manipulate. Wide front bucket seats on all trims offer good support, and the high ride height provides adequate visibility all around the truck. Tilt steering is standard on all but the base XE trim. The use of hard and cheap plastics disappoints some owners and critics. Convenience extends to the many storage compartments throughout the cabin, which include a large dual glove box, removable boxes underneath the rear seats, a front storage console, and 1-liter bottle holders in the front doors. The front passenger seat also folds flat to accommodate extra-long objects.

The 2009 Frontier comes with a choice of two bed sizes. All King Cabs feature a 6.1-foot bed, while the Crew Cabs, in order to make room for more cabin space, come with a 5-foot bed (with the option to add the 6-footer in the LE and SE trims). The new PRO-4X only offers the 5-foot bed. The versatile bed features a locking tailgate and four tiedown cleats, but anyone seriously using this truck as a cargo hauler will want to add the optional High Utility Bed package. Its Utili-Track system features five rails – three on the side walls and back wall and two on the floor – with adjustable tiedown cleats. Also included are configurable bed dividers, sliding trays, and storage units, along with a spray-in bedliner. Many owners of the 2008 Frontier offer many thanks for the practical bedliner.

As for standard features, the 2009 Frontier has something for everyone, from bare bones utility to high-end luxury. The base XE trim fills the minimalist role with its cloth seats, tachometer, and front and rear cupholders. A radio with CD player and air-conditioning can be added as options. The SE adds the air-conditioning and CD player and comes with more sought-after options, such as power windows, locks and mirrors, remote entry, and cruise control. Both the LE and PRO-4X share similar equipment, with full power accessories, leather trim for the wheel and shifter, a trip computer, an 8-way power driver's seat, and the Utili-Track bed system. The leather trim in the PRO-4X features unique red stitching.

Many of the available options for the 2009 Frontier unfortunately come bundled in expensive packages. A new Value Truck Package, offered in all but the XE, tacks on a 6-CD changer with MP3 jack, a 4-way power passenger seat, heated leather seats, heated mirrors, and a folding armrest in the back seat. The Technology Package comes with a 10-speaker sound system and the 6-CD changer, but adds satellite radio and Bluetooth and wheel-mounted audio controls. Some standalone items include a power moonroof, a portable navigation system, and an iPod interface.

The 2009 Frontier features 4-wheel disc and ABS brakes with electronic brakeforce distribution, which test drivers find responsive with very little shudder. Also standard on all trims are dual front airbags, active front head restraints, seatbelt pretensioners, and a tire monitor. Unfortunately, front and rear side impact airbags come only as options, while stability control is available only as an option for the LE and PRO-4X trims. A special Traction Package bundles traction control, Hill Descent Control (to ease wear and tear on the brakes), and Hill Start Assist (to reduce rollbacks with manual transmissions).

Many owners of both the 2009 and 2008 versions of the Frontier cite the safety profile as one of their favorite features of the truck, but some critics find the lack of standard side airbags troubling. The NHTSA gives the Frontier four stars in frontal impacts and five in side impacts, while the Insurance Institute ratings range from Good (for frontal impact) to Marginal (side impact).

The practicality of abundant storage and truck-like utility, combined with a smooth and comfortable ride and roomy cabin, top the highlights for many owners of the 2009 Frontier. They also like the fact that the truck looks good inside and out. While the V6 offers more fun and greater overall power and acceleration, drivers find the four-cylinder engine plenty adequate for the average user. Reviews of the similar 2008 version also praise the Frontier's ergonomics, fuel economy, and affordable price.

By far, the wide turning radius earns the most negative reviews from owners of the '09 Frontier. Nearly everyone mentions this as the primary downside in comments from both 2008 and 2009. Other complaints focus on the poor sound system and short front armrest. Fuel economy also comes up as a negative, although with the caveat that nobody should expect gas savings from a truck.

No reviews of the '09 Frontier yet exist from CarGurus owners, but a peek into some 2008 comments offers insight. Drivers appreciate the solid ride of the truck, which they find smooth and comfortable. The acceleration power of the V6 also earns high marks, as does the overall cost. Negatives include the use of plastic materials, the so-so fuel economy, and the lack of rear passenger room in the King Cabs.

What's your take on the 2009 Nissan Frontier?

Have you driven a 2009 Nissan Frontier?
Rank This Car

Is There A Way To Check A Service Engine Soon Code Without A Code Scanner?

Service engine soon light came on, and I would like to diagnose the problem, but do not have easy access to a code scanner. Any way to make the code flash on the dash screen?

Disconnected My Battery To Hook Up Hid Lights And When I Hooked It Back Up ...

I Have A Nissan Frontier.... I Forgot The Make And Year But I Cranked It Up...

The Check Engine Light Is Not Getting On