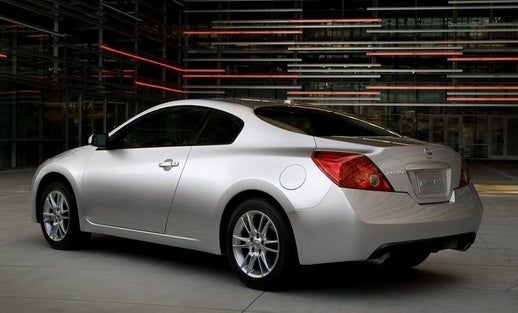 Fast and fun, Nissan's '09 Altima Coupe takes the refined cabin of the Altima sedan and gives it a jolt of sleek 350Z exterior styling and satisfyingly sporty driving dynamics.

The '09 Altima Coupe says it seats four, but the rear seats feel cramped and restrictive, and the lack of standard stability control remains a glaring oversight.

Leave the sedan to the sedate commuters and soccer moms. Nissan's '09 Altima Coupe looks good, feels good, and offers Infiniti-like styling and performance without the hefty pricetag. Sure, the back seat and trunk barely fit two small hamsters, but who buys a sexy coupe for its utility?

Though it shares a name with its sedan counterpart, the 2009 Nissan Altima Coupe hits the streets with its own unique styling and performance. Wearing a different grille, lights, and body panels, sporting a more steeply raked windshield, and coming in 7 inches shorter and 2.5 lower than the sedan, the Altima Coupe looks and acts sexier than the comparably priced Accord Coupe. Indeed, some see it as a more affordable Infiniti Q35. Looks aside, the 2009 Altima Coupe shares its four-cylinder and V6 engines with the sedan, but its smaller size and lighter weight improve highway acceleration, minimize body lean, and enhance cornering capabilities.

Available in two trims with different engines (the 2.5S and 3.5SE), this front-wheel-drive performance coupe enters its second year relatively unchanged. It gets standard automatic door locks on both trims, along with standard Smart Key push-button ignition. New options for the S include Bluetooth, a voice-recognition navigation system with real-time traffic, XM radio, and a rearview camera. The SE boosts the sporty factor by upgrading the 17-inch wheels to 18-inchers and adding standard foglights.

The '09 Altima Coupe represents a return to the days when sports coupes ruled the road. Fast and semi-furious, its performance dynamics and precise handling translate into smile-inducing fun. It allows drivers to experience a lot more energetic pep behind the wheel without giving up the the refined comfort and high-end features found in the Altima sedan. 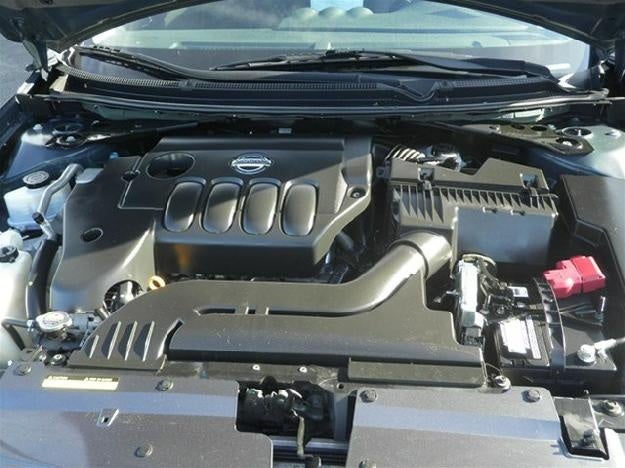 Like the sedan, the '09 Altima Coupe offers a choice of two engines and two transmissions. The Altima 2.5S carries a 16-valve, 2.5-liter DOHC inline four that delivers 175 hp and 180 lb-ft of torque. This engine performs well around town and behaves confidently in highway passing situations. For a more spirited and peppier ride, the 3.5SE gets a 24-valve, 3.5-liter DOHC V6 with output numbers of 270 hp and 258 lb-ft of torque. Weighing in slightly lighter than the sedan, the coupe clocks 0-60 times in 6 to 6.5 seconds, depending on the choice of transmission. The '09 Altima Coupe leads in fuel economy, with the four-cylinder averaging 23/32 mpg and the V6 reducing that to 19/26.

Both trims come standard with a six-speed manual, well matched to both engines, but lacking the short-throw feel to deliver a truly sporty ride. A CVT, continuously variable transmission, is optional. Aimed to improve fuel economy, this transmission features an infinite range of gears in order to provide quicker and smoother transitions. The V6 version features a Sport mode and adaptive shift control, which adjusts gears according to the driver and road conditions.

The '09 Altima Coupe fine-tunes the already firm four-wheel independent suspension of the sedan for improved performance-oriented handling on winding roads. The sport suspension does mean a harsher ride and less bump absorption than the more comfortable sedan's, but combined with the Coupe's lighter weight, smaller dimensions, and shorter overhangs, it delivers crisp maneuverability, tight cornering, and minimal body lean.

Though precise, the car's light steering behaves vaguely, offering little in the way of road feedback. On the flip side, torque steer is kept to a minimum, a noticeable step up from the sedan. Brakes react responsively, but do require a long stopping distance. The base S trim rides on 17-inch wheels, which provide top-notch road grip without much noise. The larger 18-inch alloys in the SE, however, boost the volume level of the road, and most reviewers find the Coupe to be much louder on the highway than the sedan. Visibility runs into a little trouble in the '09 Altima Coupe. Thick rear pillars and small rear quarter windows prove to be an obstacle when backing up, and drivers might want to consider splurging for the optional rearview camera.

Reviewers split on the merits of the CVT versus the manual, although they agree that both seem well suited to either the four- or six-cylinder engine. Together, the powertrains deliver not only satisfying energy and a spirited ride, but a fun quotient that's reminiscent of sport coupes of old.

Ostensibly able to seat four, the 2009 Altima Coupe seems better suited for two front-row passengers. Its sloping roofline and lower overall height reduce headroom substantially in the back seat, and legroom measures only 34.4 inches to the front row's 42 inches (both about 2 inches less than in the sedan). The end result leaves rear passengers feeling confined and stooped. Although a handy lever on the front seats provides easy release of the seatback for entry and exit, getting in and out still requires some acrobatics. Rear seats do split-fold flat 60/40, expanding the minuscule 7.4-cubic-foot trunk, but the Coupe should be left to backroad day trips and not long excursions.

Bolstered seats in the '09 Altima Coupe boost the firm supportiveness found in the sedan, and although some reviewers find the seat cushions too hard, the comfort level remains high even on longer trips. A simple and intuitive center stack layout features easily accessible controls and dials, with the exception of the optional navigation system. A few critics find the system too complex to operate, although the large 6.5-inch screen reads clearly. Standard tilt and telescopic steering aid driver comfort, and the SE features an 8-way power driver's seat with lumbar adjustment.

Cabin materials radiate a high-quality fit and finish, with lots of soft padding. A few owners and critics have noticed some rattling in the dash. Storage compartments are kept to a minimum, primarily the glovebox and a deep center console. The coupe also reduces cupholders to two in the front row.

Drivers appreciate the long list of standard comfort and convenience features in the '09 Altima Coupe, particularly the SmartKey push-button ignition and remote trunk release. The base S trim also includes full power accessories, cruise control, a trip computer, and a 6-speaker CD player with MP3 jack. The jazzier SE upgrades to a standard sunroof, Bluetooth, and leather trim. An optional 6-CD changer can be added, along with a voice-activated navigation system that features real-time traffic and satellite radio.

Safety ratings and features carry over from last year. The '09 Altima Coupe earns an impressive five stars in front and side impact tests and four stars in rollover tests. Standard on both trims are 4-wheel disc and ABS brakes, dual-stage dual front-side airbags and side curtain airbags for both rows, front head restraints, a tire monitor, and traction control. Stability control can be added only as an option, and its absence as a standard feature disappoints most professional reviewers. A rearview camera also sits on the option list and proves helpful to combat the coupe's noticeable blind spots.

Owners of the '09 Nissan Altima Coupe love its stylish looks and classy interior, as well as its fast acceleration and sporty handling. The fuel efficiency numbers make the sport coupe practical and economical while still being fun. Drivers call it nimble and peppy. Most of the complaints center on the tiny back seat and useless trunk, but owners also dislike the light steering that lacks any driver feedback. Nissan's insistence on bundling options and forcing owners to buy expensive packages in tandem infuriates owners.

CarGurus owners have not yet weighed in with their opinions, but their 2008 reviews provide a good barometer on the virtually unchanged '09 Altima Coupe. High marks go to the smooth CVT, which drivers say works well to take full advantage of the powerful V6. Fun, fast, and stylish are recurring words in many reviews, with special mention for the V6's acceleration and the high mpg numbers. Owners also say the interior feels comfortable and looks “gorgeous.” The push-button ignition continues to be a big hit. On the downside, CarGurus drivers echo disappointment with the back seat and trunk and report rattling in the dash. They also desire even more power and a rear-wheel-drive version.

What's your take on the 2009 Nissan Altima Coupe?

Users ranked 2009 Nissan Altima Coupe against other cars which they drove/owned. Each ranking was based on 9 categories. Here is the summary of top rankings.

Have you driven a 2009 Nissan Altima Coupe?
Rank This Car

Consumer Reports Magazine gives the Altima Coupe a "GOOD BET" rating, but a negative rating to the car for "Electrical". Is this a problem that can be overcome with a repair, or is it one of those ...

What Does The 75000 Warranty Cover

Can I Put A Different Brand Engine To My Nissan Altima 2.5s