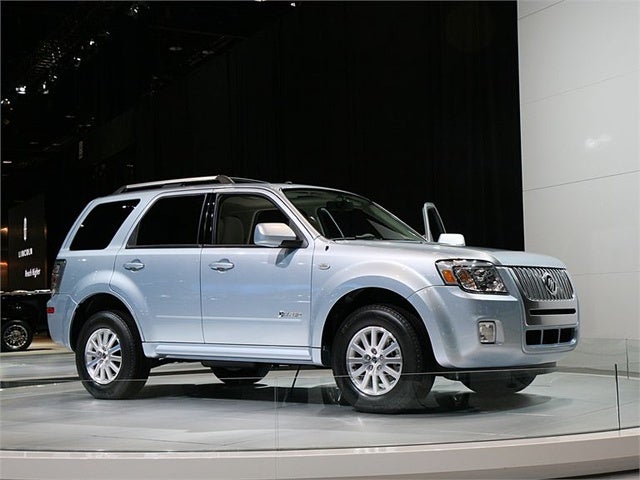 A much needed power boost, five-star safety profile, and a stable and controlled ride keep the 2009 Mercury Mariner competitive in the crowded compact SUV segment.

The '09 Mariner rides on an old platform that hasn't seen an update in nine years, and its otherwise comfortable ride gets disturbed by loud and intrusive engine and road noise.

Essentially a Ford Escape with different badging, the 2009 Mariner remains a popular choice for commuters or young families looking for a comfortable and spacious interior coupled with a large and functional cargo bay. Despite an old-style platform and brake setup, the Mariner manages to offer competitive performance and handling, and its cutting-edge SYNC system gives it a unique selling point for a more youthful consumer base.

After a major interior and exterior overhaul last year, the 2009 Mercury Mariner focuses on performance-oriented updates. This four-passenger crossover gets a new six-speed automatic transmission, which helps boost horsepower for both the four- and six-cylinder engines. New 16-inch low-rolling-resistance tires also contribute to improved fuel efficiency, along with more aerodynamic front and rear fascias that add a front chin spoiler and rear wheel spoilers. Enhancements to the suspension, which include a larger rear stabilizer bar, improve overall handling.

On the inside, the fairly new SYNC system, which integrates audio, navigation, and Bluetooth functions into one voice-activated command center, adds a status check on the vehicle and a new 911 Assist feature. Wheel-mounted cruise and audio controls become standard across the lineup. The high-end Premier jazzes things up with new blue ambient lighting.

The number two best-seller in the Mercury arsenal (just behind the Milan), the 2009 Mariner offers a choice of four- or six-cylinder engines in both Base and Premier trims, each configured in either rear- or automatic all-wheel drive. Sharing a platform with the nearly identical Ford Escape, this crossover SUV rides on 16-inch wheels, with the option to upgrade to 17-inch ones. With SUV sales lagging due to rising gas prices, Ford hopes the updates reinvigorate its consumer base. But even with the extra power, the Mariner's styling and performance improvements still leave it behind the Honda CR-V and Toyota RAV4. 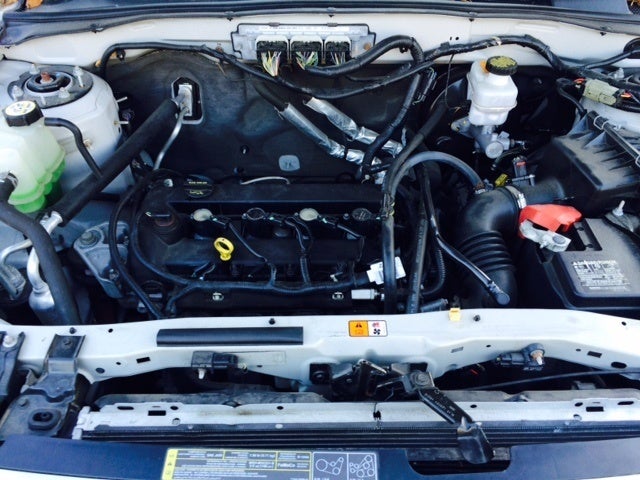 Replacing the old 2.3-liter four-cylinder is a 16-valve DOHC 2.5-liter version that adds 17 more horsepower for a total of 171 hp (that's an 11% increase) and 171 lb-ft of torque. Thanks to variable valve timing and a new six-speed automatic that replaces the clunky four-speed, fuel economy gains two points and improves to 20/28 mpg on front-wheel-drive trims and 19/25 with all-wheel drive.

The 24-valve DOHC 3.0-liter V6 gains 40 hp, for a total output of 240. Torque rates 223 lb-ft at 4,500 RPM, and this power boost shaves off nearly 2 seconds from its 0-60 time. When properly rigged, the V6 Mariner can tow up to 3,500 pounds, compared to the four-cylinder's 1,500 pounds. Both engines are offered in the Base and Premium trims. Bringing the compact SUV more in line with other vehicles in this segment, the new automatic transmission feels smoother, with quicker responses and good downshifting to improve passing power at high speeds.

Despite its 9-year-old platform, the 2009 Mariner handles surprisingly nimbly and tightly, with a small turning circle and minimal body lean when cornering. Like many compact SUVs, it rides on a fully independent Macpherson strut front and multilink rear suspension which provides a solid and firm ride without delivering too much harshness into the cabin. One critic finds good bump absorption, but some minor floatiness at higher speeds.

Introduced last year, the Mariner's electric power steering surprises many reviewers with its responsive touch and good driver feedback. Though predictably vague in lower-speed driving situations, highway handling comes across as quick and precise. Handling has definitely improved over previous years, with tweaks to the suspension and the new larger rear stabilizer bar providing a more stable and secure ride overall. While wind and tire noise remains tolerable, most test drivers and owners seem disappointed with the loud engine noise that accompanies acceleration. The deafening din interferes with cabin conversations and radio listening.

The outdated front disc/rear drum brake setup stands out as a major drawback in the '09 Mariner's performance, with one test drive clocking an inexcusable 154-ft stopping distance from 60-0 mph.

The compact 2009 Mariner uses two rows to seat up to five passengers, provided the fifth one is a child or a car seat. With a small nod to the environment, the SUV switches to soy-based, rather than petroleum-based, upholstery. With one of the more spacious interiors in the compact SUV market, the Mariner offers good head and legroom throughout the cabin to accommodate taller passengers, and one critic finds plenty of spacious knee and foot room in the back seat. This could come in handy, as the rear seats do not recline or slide fore and aft for extra space. Models equipped with a sunroof cut down only slightly on rear headroom.

Front seats feel supportive and comfortable. Drivers sit up high with plenty of visibility all around. Controls lie within easy reach and are generally simple to decipher, says one critic, except for the navigation system, which incorporates too many buttons in combination with touchscreen functions. Wheel-mounted audio and cruise control functions help drivers keep their eye on the road, and the wheel also tilts, but does not telescope. Upgrading to the Premier gets you a 6-way power driver's seat.

Rear seats split-fold 60/40, but do not fold completely flat. The hard, flat bench itself lacks cushioning and support – not a problem for short around-town excursions, but potentially uncomfortable on road trips. The cargo area starts at a nicely large 29 cubic feet and expands to 66 with the seats down. The tailgate opens wide and features a low load-in lip. Adding further loading versatility, the rear window opens separately from the liftgate. A roof rack is standard on the Premier and optional for the Base. Critics generally find interior storage adequate and well placed, with a large center console containing multiple compartments, front and rear cupholders, and four door pockets.

Satin metal accents for the gauges and dash lend the '09 Mariner a more upscale look, along with the two-tone Alcantara leather that comes standard on the Premier (optional for the Base). However, some critics and owners say the interior still feels cheap and low-grade, with too many hard plastic surfaces that don't jibe with the Mariner's costly pricetag.

Base trims feature full power accessories, leather trim on the steering wheel and shifter, cruise control, remote entry, and a 4-speaker sound system with CD player and MP3 jack. The more elegant Premier adds a 6-CD changer with satellite radio, dual-zone climate control, leather upholstery, and the SYNC entertainment and communications interface. The system integrates Bluetooth, navigation, and audio, incorporating voice commands so that drivers can keep their hands on the wheel. This year the system adds a 911 Assist feature and displays Vehicle Health Reports. Many of the Premier's standard features are available as options for the Base, along with a sunroof. Premier-only options include heated seats and a 7-speaker sound system.

The '09 Mariner can proudly tout its safety record, where it earns five stars in all front and side impact tests. It also receives the highest Good rating from the Insurance Institute. However, rollover tests garner only three stars. Stability control joins the standard equipment this year, alongside traction control, four-wheel ABS brakes with electronic brakeforce distribution, and dual front-side and side curtain airbags for both rows. Some owners report that visibility out the back is obstructed by the rear seat headrests, but these are adjustable and can be removed. The Premier adds parking sensors and an auto-dimming rearview mirror. All trims come with a tire monitor and standard foglights.

Judging from owner reviews across various websites, the new SYNC system stands out as the favorite feature of the 2009 Mariner. Drivers love its voice-activated controls and entertainment integration. The Mariner also scores high for easy handling and interior passenger and cargo space, with a ride that feels smoother and more precise than the 2008 model's. The V6 engine delivers above-average power while maintaining fuel economy just slightly lower than the more anemic four-cylinder's. Most drivers surprisingly give raves to the SUV's mpg numbers, with the majority claiming mileage in the high 20s. However, a few owners say the fuel efficiency could be improved.

Several owners report problems with the transmission early in the life of the Mariner, requiring time-consuming repairs. Despite its compact size, drivers say the Mariner feels tippy at high speeds, while road, tire, and engine noise intrudes annoyingly into the cabin. More than one driver noticed that the hood shakes when idling, which dealers explain is due to the way the engine has been placed to maximize fuel efficiency. Another common complaint focuses on the cumbersome process required to fold the rear seats, which requires removing the headrests.

CarGurus reviews of the '09 Mariner highlight the SUV's safety record, higher-than-expected fuel economy, and nicely appointed interior. With its solid ride and standard equipment, the Mariner represents a good value for the money, according to one owner. And of course, the SYNC system earns rave reviews. The fairly similar '08 Mariner rates well for handling and interior roominess, but one reviewer dislikes the use of low-grade materials for the cabin.

What's your take on the 2009 Mercury Mariner?

Have you driven a 2009 Mercury Mariner?
Rank This Car

My Mercury Turns Off While I Am Driving It ...but Will Turn Back On

Drivers Side AC Not Cold?

Earlier when I was driving I attempted to use the cold AC in my 09 Mariner but only warm air was coming out. The passenger side is fine, cold air coming out with no problem. What could the problem...

AC Will Not Engage

Needed to replace dual radiator fans , because the drivers side would not work , as car started to get hotter the other fan kicked in, the one for a/c and over heating . I also notice that a/c didn...

I understand keeping up maintenance w/ any vehicle you can expect it to last. But what's the general life expectancy of the Ford Escape/Mercury Mariner series? I have 162K miles on my 09 Mariner. ...

Would A New Alternator Help With Steering Wheel?

So I just got the alternator replaced in my 09 Mercury Mariner. I noticed the steering wheel just feels more, I can't describe it, I guess responsive. I really enjoy it. Would a new alternator have...