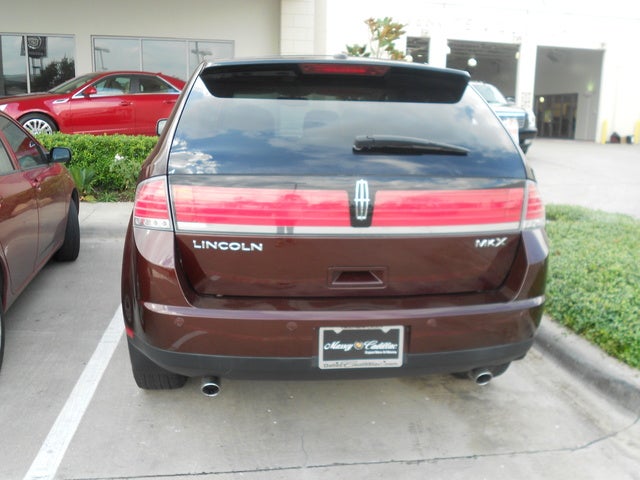 The 2009 Lincoln MKX offers good looks, comfort, handling, and a lot of room, all in a luxury package.

A little corner-cutting with interior materials, and the lack of some expected refinements that does nothing to justify its hefty pricetag, leaves the ’09 MKX trailing a number of others in the ultra-competitive crossover market.

Despite its luxury features, the pricey 2009 Lincoln MKX may very well get passed up for the somewhat less endowed, but seriously less expensive Ford Edge. That said, the MKX is a safe, comfortable, reasonably luxurious crossover with enough standard features to satisfy cravings for at least a modicum of luxury.

The 2009 MKX maintains the Lincoln tradition of being long on luxury, as well as long on price. Basically a dressed-up Ford Edge, with a bit more chrome, a distinctive grille, and a few more standard luxury features, the ’09 MKX is a carryover from 2008. Lincoln seems to hope, with the MKX, that they have enough positive brand recognition to keep this five-door, five-passenger crossover afloat in an increasingly competitive market.

Introduced in 2007 and intended to replace the short-lived Aviator, the MKX for ’09 is still delivered in two trims - the Base, which has front-wheel drive, and the AWD - with both trims offering the same impressive list of standard features. Roomier than many of its competitors with 69 cubic feet of cargo space, the MKX is seen by virtually all professional reviewers as well-appointed, but not quite up to many of the high-end crossovers available.

The ’09 Lincoln MKX scored a bit less than the class average in ConsumerGuideAutos' recommendations, with the Mercedes-Benz M-Class topping the list and the Acura MDX, Buick Enclave, and Lexus RX close behind.

Professional reviewers find the 3.5-liter V6 quiet and better than adequate around town. More than one reviewer, however, notes the ’09 MKX is a bit hesitant on the highway, claiming a need to drop the transmission into overdrive because the engine simply didn’t have enough torque available to respond adequately when trying to pass.

Most reviewers find the six-speed automatic shifts smoothly and quickly enough under ordinary driving conditions, though one professional reviewer finds the lack of an auto-manual feature takes a bit of fun out of driving the ’09 MKX.

The ’09 MKX receives a ULEV II rating from the California Air Resources Board.

A luxury-tuned four-wheel independent suspension gives the 2009 Lincoln MKX the ride comfort and handling of a sedan with the added advantage of a high seating position. A tight turning radius (38.6 feet) makes the MKX far more maneuverable than most crossovers in downtown traffic.

Most reviewers note the ’09 MKX handles well enough and rides comfortably, but also find that poor roads and tight cornering are handled better by much of the competition. A number of professional reviewers feel the ride in the MKX is not quite on a par with what they feel a luxury vehicle should offer, though many are quick to note that the MKX handles better than most crossovers on curvy, bumpy roads.

The ’09 MKX comes with standard 18-inch alloy wheels, and 20-inch chrome wheels are available with the MKX Limited Edition Package. Reviewers caution owners, however, not to expect the ideal ride with the 20-inch tires.

Though the MKX is classified as an SUV and available with all-wheel drive, this luxury ride is not designed for any sort of off-roading. Maximum towing capacity for the ’09 MKX is 3,500 pounds when properly equipped.

A lack of quality cabin materials in the 2009 MKX disturbs a number of reviewers, but virtually all agree that cutting-edge technology as well as comfort and convenience features are not lacking. The gauges and instruments are large (though a bit too retro in the opinion of some reviewers), well positioned, and easily accessible, for the most part. One reviewer does note difficulty in reading gauges when the backlight is turned off.

Options for the ’09 MKX include the Elite Package with a 14-speaker, THX-certified audio system, 20-inch chrome-clad wheels, a touch-screen navigation system, and panoramic sunroof. The Limited Edition Package adds unique trim and upgraded leather upholstery. A rear-seat DVD entertainment system, heated rear seats, and the SYNC voice-activated system for cell phones and an MP3 player are also available with the MKX in ’09.

A plethora of standard safety features impresses virtually all professional reviewers, many of whom note that the 2009 Lincoln MKX may be one of the safest vehicles in its class.

The 2009 MKX received five stars from the National Highway Traffic and Safety Administration (NHTSA) in front and side impact tests, and four stars in rollover testing. The Insurance Institute for Highway Safety (IIHS) gave the Lincoln MKX a rating of Good, its highest rating.

Owners of the 2009 Lincoln MKX praise the uniqueness and styling of this luxury SUV, but a few think it ought to offer a few more amenities for its hefty price. Owners also feel that the MKX is somewhat deficient in horsepower and could offer better gas mileage.

For the most part, owners of the ’09 MKX find its luxury appointments, good looks, interior features and options, ride and handling, and especially its maneuverability in crowded spaces, better than adequate. All owners enjoy the genuine wood, satin-nickel, and chrome interior accents. One owner mentions that this almost-posh crossover “inspires customer loyalty.”

Have you driven a 2009 Lincoln MKX?
Rank This Car

How To Install A Killswitch

Hello I I’m trying to wire and install my Killswitch, question is should I splice into the fuel pump relay and wire there or… does anyone have a few tips to help wire a effective and sufficient kill...

How To Install A Killswitch

Hi there I am looking for the most efficient way to install and wire a kill switch into my 2009 Lincoln MKX. Main question is should I splice into the fuel pump relay and install the Killswitch the...

How To Install Kill Switch

Wiring and installing a kill switch into my Lincoln MKX. Should I splice into the fuel pump relay? I don’t wanna take any shortcuts but I need the installation to be efficient and sufficient.

My Lincoln MKX won’t start when engine is warm. Starts fine after it’s been sitting for a while. 4 mechanics have been unable to diagnose the issue. I’ve had a tune up within the last 3 months, ba...

My headlights don’t come on at dark