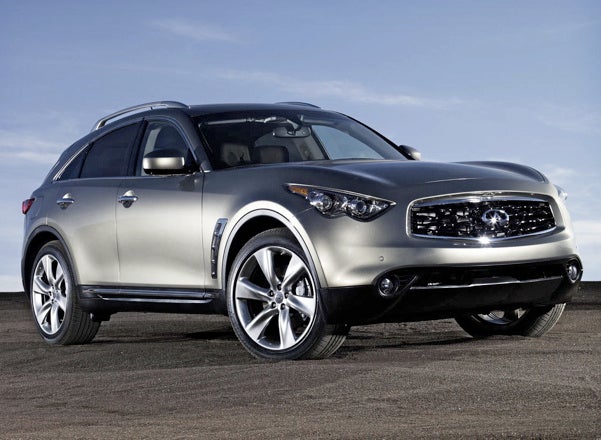 Debuting for the 2009 model year as a replacement for the FX45, the Infiniti FX50 delivers high-powered performance, agile handling, and a luxury-oriented interior. Outside, it displays a fresh new design, courtesy of a next-generation updating of the FX lineup. Design components include functional side vents, which aid in aerodynamics. In addition, a self-adjusting suspension provides improved performance as well as comfort for occupants, Infiniti notes.

The 2009 FX50 comes equipped with Rear Active Steering, in which the rear wheels actively turn to provide quicker, more-stable steering. The FX50's wide stance also aids in stability and gives the vehicle an athletic appearance, while the front midship engine placement, which positions the engine behind the front axle but in front of the passenger cabin, helps to improve the vehicle's overall balance and handling.

A new 5.0-liter V8 engine powers the 2009 Infiniti FX50, delivering 390 horsepower - an increase of 70 horsepower over the FX45's engine. The V8 links to an all-new seven-speed automatic transmission, which includes specially calibrated gears that enable the FX50 to cruise at lower rpms at highway speeds, reducing fuel consumption.

There's no mistaking the FX50 on the open road, with its eye-catching mixture of SUV and sports car design features. Inside, the roomy cabin comes equipped with such features as quilted leather seats, hand-stained maple wood trim, 12 sequential welcome lights that guide occupants into the cabin, eight-way power-adjustable front seats, and an intelligent key with push-button ignition. In addition, an advanced climate control system filters out particles to remove allergens and odors from interior air.

The 2009 FX50 also comes equipped a number of innovative features, including Intelligent Cruise Control, which maintains a set distance to the car ahead at a range of speeds, and a Lane Departure Prevention System, which monitors lane markings and applies the brakes as needed to help you stay in your lane. In addition, an Around View Monitor parking assist system uses four exterior cameras to give you a 360-degree view around the vehicle, displayed on the in-dash monitor.

With the second-row seats folded, the FX50 offers 62 cubic feet of cargo space. The rear door includes a closure-assist system.

CAN YOU GET CAR SHIPPED FROM ANOTHER LOCATION

Glass Does Not Work And The Only One Working Is Diver Side Without Otto....