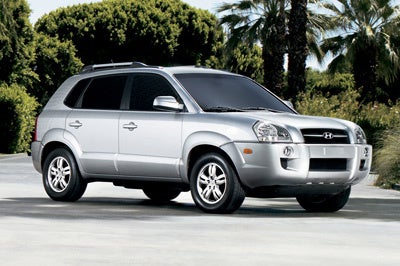 You get more than what you pay for in the 2009 Hyundai Tucson, with a long list of standard features, five-star safety record, class-leading powertrain warranty, and V6 engine option.

Both four- and six-cylinder engines feel underpowered and noisy, and the disconnected handling in the '09 Tucson gets no help from its vague and lifeless steering.

Families just starting out and looking for an affordable SUV that won't suck up the gas or empty the wallet should be plenty happy with the 2009 Tucson. Its roomy passenger and cargo space, compact-size maneuverability, and strong and reliable safety profile give it a family-oriented focus, while its decent fuel efficiency will give you extra money to spend on snacks at rest stops. If towing power and rugged utility matter less than a solid yet conservative ability to haul people, the '09 Tucson holds its own against stiff competition from Honda and Toyota.

Sporting a new, bolder chrome front grille this year, the 2009 Hyundai Tucson resembles even more the larger Santa Fe. Though it resides in the compact SUV segment, the Tucson actually boasts a larger interior volume than the Ford Escape and Nissan Rogue and a longer wheelbase than the RAV4. The easy-folding second-row seats and versatile cargo area, along with a smooth ride, decent fuel economy, and car-like maneuverability, make it a solid choice for families and city commuters on a budget.

Along with the new front fascia, the 2009 Tucson tweaks its rear tailgate trim and adds new 16-inch alloy wheels to the midrange SE. Charcoal black becomes the new interior seat color. On the inside, satellite radio and an MP3 jack are now standard across the line, along with a Bluetooth option billed as compatible with any cell phone. The SE gets standard heated seats and a windshield wiper de-icer, while the top-of-the-line Limited features a now-standard sunroof and a new navigation/audio system. The system provides USB and MP3 jacks and a card slot that allows connection to any MP3 player or memory stick. Most important, the '09 Tucson boosts its fuel economy nearly 5% for both its four- and six-cylinder engines, thanks to improvements to the manual transmission and torque converter.

This compact SUV seats five and comes in base GLS, SE, and high-end Limited trims. All are offered with front-wheel drive, and the V6 SE and Limited are also available with automatic all-wheel drive. Standard features on the GLS include power accessories and a CD player, with the upgraded trims adding leather upholstery, a 6-CD changer, and heated front seats. Hyundai offers all these features while keeping the initial pricetag low, and budget-minded drivers will also appreciate its low-20s fuel economy and 10-year/100,000-mile powertrain warranty. Another way in which the Tucson beats out its rivals: Many other compact SUVs don't offer a V6.

Standard under the hood of the GLS and optional for the Limited, a 16-valve, 2.0-liter DOHC inline four engine delivers 140 hp and 136 lb-ft of torque at 4,500 RPM. It comes paired with either a four-speed Shiftronic automatic transmission or a revised five-speed manual. The new short-throw shifter improves fuel efficiency by 4.6%, boosting mileage numbers to 20/26 mpg city/highway. While owners seem pleased with the savings at the pump, the four-cylinder disappoints in the acceleration department, emitting a lot of noise when pushed on the highway. Towing capacity maxes out at 1,500 pounds. One driver finds the manual gearbox jerky and unpredictable.

Standard in both the SE and Limited is the more powerful 24-valve, 2.7-liter DOHC V6, which puts out 173 hp and 177 lb-ft of torque at 4,000 RPM and can tow up to 2,000 pounds. Paired only with the four-speed Shiftronic, it averages a noticeably worse 17/23 mpg, despite being equipped with variable valve timing. Test drives reveal that, like the four-cylinder, it also struggles in highway acceleration, but seems to do so more smoothly and quietly.

Though it has SUV-like height and good visibility, the '09 Tucson's compact size and Macpherson strut front and multilink rear suspension give it a car-like ride and easy maneuverability, say critics and owners alike. With subpar acceleration but a tight turning circle of 35 feet, the Tucson behaves best in city rather than highway driving situations, ideal for around-town commuting. Its build feels solid and steady, although several critics feel it lacks the more refined handling characteristics of the RAV4 and CR-V. While braking is good, the steering remains predictably numb and vague, lacking any feedback from the road to the driver.

Although owners did not notice any wind noise, test drivers seem unanimous in their criticism of both road and engine noise, particularly in four-cylinder models. The V6 offers a quieter ride, but still struggles audibly on acceleration. The noise problem disrupts an otherwise comfortable ride, provided by a firm yet forgiving suspension. All trims ride on 16-inch wheels.

Available on V6-equipped trims, the full-time, on-demand AWD system automatically directs up to 50% of torque to the rear wheels, allowing for better traction in slippery conditions or minor off-road terrain. It can also be locked into a 50/50 split at the push of a button. Lacking low-range gearing, the SUV should not be taken into rugged off-road situations.

The '09 Tucson offers plenty of standard features and a comfortable interior with plenty of adult legroom in the front and back, though models equipped with a sunroof cut down on rear headroom. Front passengers get 42 inches of legroom, while rear passengers find their 37 inches accommodate longer-legged adults. On long trips, adults may feel a bit more cramped, but the rear seats do recline for added comfort. Headroom tapers off from 40 inches up front to 38 in the back.

Rear seats split-fold easily in a 60/40 configuration, and the front passenger seat also folds flat in all trims for those times when you're carting around awkwardly long objects. Cargo space, about comparable for its class, starts out at 22.7 cubic feet and expands to 65. Tiedowns are standard, and the space also features an underfloor storage compartment and a removable washable mat. The rear window opens separately from the tailgate. A roof rack comes standard with the SE and Limited and is optional for the base GLS.

Owners find the controls well laid out and comfortable to reach and read. Driver's seats are manually adjustable for lumbar and height, but none of the three trims offer power adjustments. The steering wheel tilts, but does not telescope. The interior materials get mixed reviews, with some critics calling the cloth seats outdated, while many owners find the cabin refined and high-end. Both agree that the hard plastics look cheap and easily breakable. Interior storage could be better, limited to small front and overhead consoles and the requisite cupholders in both rows. All trims feature three 12-volt power points.

The base GLS represents the value-oriented trim, offering a basic package of standard features at an affordable price. These include power windows, locks, and heated mirrors, air-conditioning, intermittent wipers, and a 6-speaker sound system with CD player, satellite radio, and MP3 jack. Owners, however, feel the quality of the audio needs improvement. The midrange SE adds upgraded cloth, heated front seats, a trip computer, cruise control, and leather trim on the wheel and shifter. At the high end of the lineup, the Limited upgrades to leather upholstery, automatic climate control, and a 7-speaker sound system with a 6-CD changer. It also features a power sunroof, privacy glass, and a new touchscreen navigation system that absorbs the audio functions. The system features 700 MB of storage plus an SD card slot.

Families will be pleased with the five-star crash test ratings earned by the 2009 Tucson. This sturdy and solid SUV gets the highest marks for both frontal and side impact tests and four stars in rollovers. New this year for all trims, electronic stability control includes standard traction control. The four-wheel disc and ABS brakes come with electronic brakeforce distribution. Dual front-side airbags feature passenger airbag cutoff, and side curtain bags cover both rows. Active front head restraints minimize the effects of whiplash. A tire monitor keeps track of the 16-inch wheels, while foglights are included on the SE and Limited.

Overwhelmingly, owners of the '09 Tucson agree that the SUV represents a great deal – packing in a lot of standard equipment at an affordable price, coupled with a long-term warranty and terrific fuel economy. Drivers also find the cabin roomy for both passengers and cargo, with several commenting on the lack of wind noise. The solid build and strong safety record also rate highly with owners, who find the Tucson smooth, steady, and reliable. On the downside, drivers feel the SUV needs a larger four-cylinder that provides more acceleration power while maintaining high fuel efficiency. The interior rates low for its use of low-grade plastics, and several owners complain about the radio.

According to CarGurus owners of the '09 Tucson, this SUV scores high for safety, functional use of interior space, and overall pricetag. Unlike many other reviews, the interior rates well for its high-end look and the easy-folding rear seats. The underpowered four-cylinder, coupled with a stuttering manual shifter, detracts from overall performance. Reviews of the nearly similar 2008 model echo complaints about the lack of acceleration power, but include raves for easy handling and maneuverability and the roomy cabin.

What's your take on the 2009 Hyundai Tucson?

Have you driven a 2009 Hyundai Tucson?
Rank This Car

Engen Shut Down While Driving

My hyundai tucson shut down while driving and never start again, no warning please help

There isn't a fuse number for the radio

Have recently done a service on my 2009 Tucson, and while 3 of the spark plugs came out without a problem I've been unable to remove number 2 plug no matter how I try... The socket just doesn't seem t...

My dealer advised me to replace my timing belt on my 2009 Tucson because the car is 6 years old. I think this is 'overkill' and would like to wait until I have at least 60,000 miles before changing...