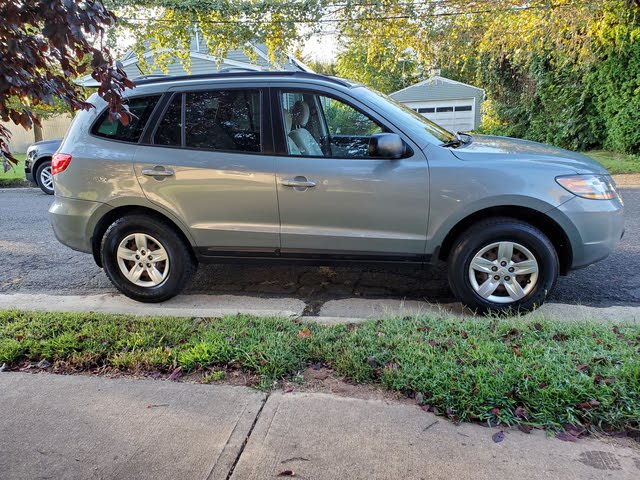 Hyundai has done a good job making its 2009 Santa Fe more competitive in the crowded midsize SUV category, delivering a potent mix of roominess, reliability, styling, comfort, and safety features, which should appeal to family-minded buyers on a budget.

Some still consider the Santa Fe underpowered when compared to similar SUVs from other automakers, and fuel economy lags at a time when many buyers are more energy-conscious.

With its long list of standard features, top-of-the-line safety systems, and surprisingly upscale cabin materials, the 2009 Santa Fe represents a good buy, considering its relatively low pricetag and long-term powertrain warranty. While engine performance and fuel economy remain sore spots for some, the Santa Fe draws good marks from many loyal fans, who are pleased with its roominess, reliability, styling, comfort, and handling.

The Hyundai Santa Fe SUV receives only minor updates for 2009, including standard iPod/MP3 and USB input jacks for the audio systems in all trims and a few upgrades to options packages. The Santa Fe last received a redesign in 2007, when Hyundai expanded its versatile, value-priced family hauler by a few inches, boosting it into the crowded and competitive midsize SUV category. Hyundai reportedly plans to redesign the Santa Fe in 2010, adding more fuel-efficient engines, so 2009 should be the last year of the current design.

The Santa Fe scores well with owners and reviewers in a number of areas, including its safety features, generous cargo space, and exterior design. However, some find it lacking in other key areas, including performance and fuel economy. Still, many consider the Santa Fe a good value, delivering a comfortable, roomy interior with seating for up to seven passengers (with the optional third-row seats), available all-wheel-drive, decent reliability, standard traction control, and a full range of airbags, which help ensure the safety of occupants in all rows of seats.

Hyundai offers the Santa Fe in three trims for 2009, ranging from the entry-level GLS to the midlevel SE to the top-of-the-line Limited. All are powered by V6 engines. Most owners and reviewers give the Santa Fe good marks for build quality. For potential buyers still skeptical of vehicles built by the Korean automaker, Hyundai offers a generous five-year/60,000-mile basic warranty and a 10-year/100,000-mile powertrain warranty, which adds to the Santa Fe's reputation as a good buy for families on a limited budget.

While the Santa Fe's two V6 powerplants won't overwhelm drivers, the engines probably won't underwhelm either. Budget-minded drivers will want to opt for the GLS trim, with its 185-hp, 2.7-liter V6, which links to a five-speed manual transmission or an available four-speed automatic with Shiftronic. With the Shiftronic feature, drivers can manually tap down or up to downshift or upshift.

Those who prefer a more spirited ride will want to step up to the SE or Limited trims, which bump up the horsepower thanks to a 242-hp, 3.3-liter, double-overhead-cam V6 that generates 226 lb-ft of torque at 4,500 RPM. The more powerful V6 links to a five-speed automatic, also with Shiftronic. Not surprisingly, most reviewers recommend the larger V6, which does a better job of handling the Santa Fe's weight and moving the SUV along at a quicker pace.

Drivers won't find much difference in fuel economy between the two engines. The GLS with the smaller V6 delivers 17/24 city/highway mpg with a manual transmission. That improves slightly to 18/24 with the automatic. The larger V6 checks in at 17/24 with the five-speed automatic.

All three trims come standard with front-wheel drive. An available Borg Warner automatic all-wheel-drive system provides additional traction at all four wheels in all types of weather and road conditions, though reviewers don't recommend the AWD system for off-roading.

For 2009, Hyundai adds a trailer prep package as standard equipment for the SE and Limited trims. The Santa Fe can tow up to 3,500 pounds.

The Santa Fe's unibody architecture provides a smooth, sedan-like ride and agile handling, while doors that triple-seal against the body help ensure a quiet cabin. While the brakes have good feel, they don't have quite the same stopping power as systems in some competitive vehicles, reviewers note. The SUV's tight turn ratio makes the Santa Fe maneuverable in crowded spaces, but could cause a tipping concern at higher speeds. For the most part, though, this hasn't been an issue, according to reviewers, who credit the Santa Fe's Electronic Stability Control system, which comes standard on all trims. The Santa Fe's wider stance, which increased with the redesign in 2007, also helps ensure its stability.

The Santa Fe's underpinnings include MacPherson struts in the front and a multi-link rear suspension system, as well as coil springs and gas-charged dampers at all four wheels. As a result, the Santa Fe handles most road surfaces well, minimizing the feel of small road bumps in the cabin, although rougher road surfaces can cause rocking and minor interior vibration, according to some reviewers.

The GLS trim rides on 16-inch wheels, which get upgraded to 18-inch alloy wheels for the SE and Limited trims. Most owners and reviewers give the Santa Fe good marks for seating comfort, although some find the driver's seat too high, and others note tight legroom in the second and especially in the optional third-row seats. Adults in particular will find the third row too cramped for longer trips, although the third row offers more legroom than similar third-row seating in the Acura MDX and Volvo XC90, Hyundai notes.

Most owners and reviewers are impressed with the layout of the Santa Fe's cabin, as well as the cabin's roominess. Interior materials and components have a good look and feel, even in the lower-end GLS trim, which sports realistic woodgrain trim on the dash and door panels. Nice touches like extendable visors, blue backlighting for interior gauges, color-keyed seat belts, and blue lights around cupholders for night-time driving also draw favorable comments.

All trims come equipped with power windows and door locks, a tilt and telescopic steering wheel, cruise control, and air conditioning. The SE adds steering-wheel-mounted audio controls, a trip computer, foglights, and automatic headlights, while the Limited goes all out with leather seats, heated front seats, and a power driver's seat with power lumbar support.

For music lovers, the GLS and SE trims come equipped with a six-speaker audio system with a CD player and XM satellite radio. For the Limited trim, the audio system upgrades to a 605-watt Infinity Logic7 surround-sound system with a subwoofer.

Upgrades for 2009 include standard auxiliary MP3 and USB input jacks. Drivers can use the USB jack to play as well as charge an iPod or flash drive. In addition, when an MP3 player is connected through the USB jack, the driver can access tracks using controls mounted on the steering wheel. The Santa Fe’s new audio head unit displays four lines of text for easy viewing of sound tracks.

The Insurance Institute for Highway Safety named the Santa Fe a Top Safety Pick in 2007, and the National Highway Traffic Safety Administration awarded the 2008 Santa Fe a five-star rating (the highest possible) in front, side, and rear crash tests. In addition, the NHTSA gave the Santa Fe a four-star rollover rating for both front-wheel and all-wheel-drive trims.

In addition to Electronic Stability Control, standard safety features for the Santa Fe include antilock brakes with brake assist and electronic brakeforce distribution, which equalizes braking force between the front and rear axles to ensure balanced stopping power.

Many owners are pleasantly surprised by the Santa Fe, and find themselves impressed by its better-than-expected attributes, including its overall quality, reliability, and interior fit and finish. Owners cite the Santa Fe's good looks, comfortable ride, and agile handling,
especially in the rain, as positive points. They also like its roomy and well-equipped interior,
as well as its brakes and towing capacity. Some would like to see better fuel economy, but others find the SUV's fuel economy satisfactory.

On the downside, some owners find the driver's seat too high for taller drivers, who can't lower it far enough, and others complain of a rough ride on bumpy roads. In addition, many owners recommend the 18-inch wheels over the 16-inch ones.

CarGurus drivers have similar comments, giving good marks to the Santa Fe's interior, as well as its economy and value. They also find the Santa Fe easy to handle and well-equipped.

Haki I am not satisfied with Hyundai Santa Fe 2009 because while driving it loses speed and the filter sign (warning) comes out in the instruments table. I’ve done full service many times but it didn’t fix anything, the same problem goes on.

Ilove2plan4u Just bought one I hope it will be a excellent vehicle for my wedding plannign business and my wedding Officiant business. I need it to be reliable.

Donc1960 I like the vehicle but I have a problem with my white 2009 santa fe with the paint coming off ,I talked to people about and they say it is delamination ,I have called the dealer and I either get I don't what it is or no call back, any one have the recall # for this or a possible ,I have tried to get in touch with people but NO HELP

HeidiFish I have had my 2009 Hyundai Sante Fe from the very beginning and it has 202,000 miles and is running great! I ended up buying a 2014 Hyundai Sante Fe Sport this year and LOVE that one too! I don't have paint issues like someone else described and mine doesn't lose speed. The only big difference I noticed is that the brakes are not nearly as sensitive as my 2014 but I've never had a problem. It's a great car for an affordable price and I certainly got my money's worth.

Have you driven a 2009 Hyundai Santa Fe?
Rank This Car

I was exiting the freeway, turning left and accelerating when the dashboard on my 2009 Hyundai Santa Fe lit up like a Christmas tree for a second, then the car shut off. The power steering and brak...

Why Is Carrus Auto Not Answering Calls?

How do I check if a dealership is still open, I have tried to contact for 2 days and get no response, they are listed on CarGurus

How To Post My Suv For Sale On CarGurus

My Grand daughter has a 2009 Sante Fe that has engine drivability issues that the dealer can not solve. His response was to take it to the scrap dealer. To bad, so sad, not our problem, see you late...

Does A 2009 Hyundi Santa Fe Have A Block Heater

does it have a block heater