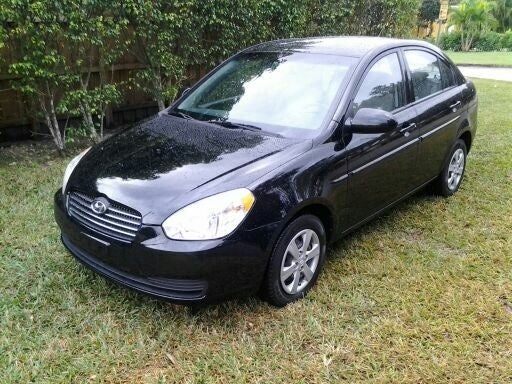 Proving to be an excellent commuter car, the 2009 Hyundai Accent offers top-notch fuel economy and a solid ride at an extremely affordable price.

Hyundai continues to improve its lineup and reputation, and the '09 Accent represents a strong contender in a crowded field. The choice of either a sedan or hatchback, a quality build and smooth ride, and outstanding fuel efficiency can all be had for a very affordable price. However, the '09 Accent does lag considerably behind most cars in its class in terms of safety ratings, something to take into consideration if you plan to use the compact as a family car.

The compact 2009 Hyundai Accent returns with only minor changes this year, helping keep this compact hatch and sedan affordable and cost-efficient. Perfect for first-time buyers or commuters on a budget, the front-wheel drive Accent achieves high mileage ratings and carries itself just as well as its closest competitors – the Nissan Versa and Toyota Yaris. Add to this Hyundai's superior 10-year/100,000-mile powertrain warranty, and the Accent continues to earn high marks from both owners and professional critics.

The '09 Accent comes in GS and SE hatchbacks and a GLS sedan. The SE represents the sportiest of the three trims, with a sport-tuned suspension, larger 16-inch wheels, and the longest list of standard features. GS and GLS trims ride on 14-inch wheels, with the option to bump up to 15-inchers on the GLS. For 2009, tweaks to the four-cylinder engine and the tires improve fuel economy by 3-8%, and cruise control is now an option for the SE and GLS.

Surprisingly spacious for a compact, the Accent offers the versatility of owning either a family-oriented sedan or cargo-oriented hatchback. While no powerhouse, it compares favorably with other economy cars in its class, and its light weight offers a spirited ride with easy maneuverability, making it a perfect car for tooling around city streets. 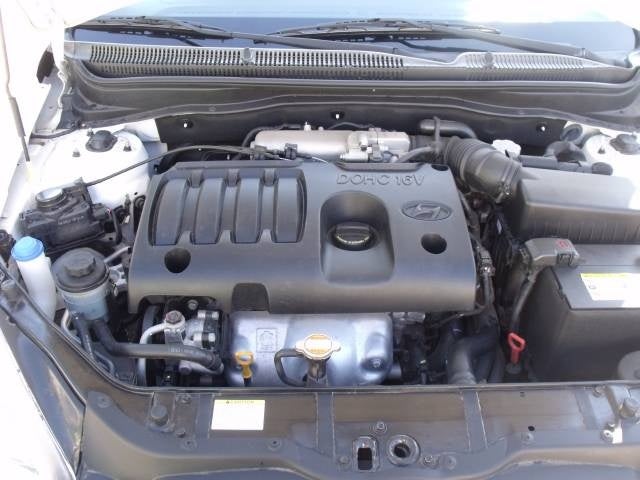 One engine powers all three trims in the '09 Accent lineup. The 16-valve, 1.6-liter inline four gets 110 hp and 106 lb-ft of torque at 4,500 RPM. Transmission choices range from a 4-speed automatic to a 5-speed manual, with impressive mileage ratings around 26/35 and 27/33 mpg respectively. Test drives reveal both transmissions to be smooth and quick in gear transitions, although the automatic gets sorely tested when trying to accelerate. Published 0-60 times with the automatic linger around 11 seconds, but the manual reduces that number to 9.4.

The Accent is no racer, and it struggles noisily when accelerating on the highway or with the air-conditioning on. However, it achieves its econobox purpose admirably – it gets drivers from point A to point B with confident commuter power and a relatively quiet engine.

The '09 Accent sits on a Macpherson strut front and torsion beam rear suspension, sharing a platform with its sister, the Kia Rio. The soft suspension delivers an expected floaty feel, especially on the highway, but absorbs bumps and dips relatively smoothly. The SE's firmer sport tuning amps up the harshness, particularly when combined with its larger 16-inch wheels, but does improve cornering and road grip.

Conversely, the narrow tires on the GS and GLS contribute to some noticeable body lean in turns, but otherwise provide decent traction, and the compact's small size and light weight translate into good maneuverability. Like most compact cars, the power steering feels vague and transmits very little road feel to the driver. The powertrain, despite its noisy attempts at acceleration on the highway, shifts smoothly and cleanly, improving the Accent's handling around town. A low, short hood and expansive windshield offer plenty of visibility for the driver.

The '09 Accent features generally what you'd expect from a compact – no fancy bells and whistles or upscale plushness, but nothing too cheap or harsh either. The cabin of the Accent feels practical and comfortable, with lots of room devoted to front passengers and not so much to those in back. Those over 6 feet tall will feel right at home up front with 43 inches of legroom and seats that slide a long way back. On the downside, one reviewer finds the front seats lacking sufficient thigh support. Rear passengers get a cramped 34.3 inches of legroom, and headroom in the hatchback can feel claustrophobic. In fact, both head- and legroom measure less than those in the Yaris and Versa.

In both the sedan and hatchback, the rear seats split-fold 60/40, and the SE adds a folding armrest that contains cupholders. The sedan's trunk measures 12.4 cubic feet, rather roomy for a compact, but the hatchback proves the better cargo carrier, with up to 15.9 cubic feet. Though owners and reviewers alike appreciate the spacious storage capacity, they find the shallow trunk opening causes some difficulty when loading. A cargo cover comes standard in the hatchback. Cabin storage remains minimal, although putting a bottle holder in every door pocket is a nice touch.

The '09 Accent keeps its price affordable by offering few standard features, which disappoints some owners. The truly budget-minded will feel the penny-pinching in the GS hatch, which lacks air-conditioning or a CD player. It comes only with a tachometer, intermittent front wipers, six cupholders, and manually adjustable front seats. However, its radio does come satellite-ready. The GLS sedan adds two more cupholders, air-conditioning, and a CD player.

The SE hatchback acts as the premium trim here, with power windows, locks, and mirrors, remote entry, leather trim, a CD/MP3 player with satellite radio, and an intermittent rear wiper. It's also the sportiest Accent. Along with its sport-tuned suspension, it adds foglights, a rear spoiler, larger 16-inch alloy wheels, and body-colored moldings. Much of the SE's features can be found in the optional Convenience Package. New options for 2009 include a sunroof for the SE and the much desired cruise control feature for all but the GS trim.

Although the '09 Accent boasts the rare feature of standard side curtain airbags for both rows, along with dual front-side ones, the compact car earns inconsistent crash tests scores that may leave some concerned about its safety profile. The NHTSA gives it five stars for front passengers, but only three stars for rear passengers, while the Insurance Institute rates it both Acceptable and Poor for these same categories.

Although drivers initially buy the '09 Accent for its fuel economy (with reports of mileage in the high 30s), they seem pleasantly surprised by its smooth and comfortable ride, roomy interior, and abundant cargo space. Owners of the SE call it fun and sporty, delivering a solid feel behind the wheel.

Complaints focus on the slightly anemic powertrain, which struggles to accelerate and suffers a setback if you turn on the air-conditioning. Other drivers point out the lack of some standard features, such as cruise control.

The CarGurus jury is still out for the 2009 Accent, but the similarly equipped 2008 version gets high marks for its fuel economy and low pricetag. Owners echo current reviews regarding the spacious front passenger room and smooth ride, recommending the SE for those who want slightly more excitement.

What's your take on the 2009 Hyundai Accent?

Steve 6 years and 114,000 miles, I can put my Accent up against any other vehicle in a blizzard. My little Accent out performed 9 SUV's during Buffalo's "Snovember" storm. Leaving work with 2-4 feet already on the roads, I managed to drive from the northeastern side of the storm through to the south western side (25-35miles) and on to home. I've never had a better vehicle handle so much snow!

Users ranked 2009 Hyundai Accent against other cars which they drove/owned. Each ranking was based on 9 categories. Here is the summary of top rankings.

Have you driven a 2009 Hyundai Accent?
Rank This Car

My car is having rough idles, and I have to press the accelerator in order to get the car to start and if i let go of the gas pedal too soon it will turn off. The RPMS are below whats normal. I repl...

My car is having rough idles, and I have to press the accelerator in order to get the car to start and if i let go of the gas pedal too soon it will turn off. The RPMS are below whats normal. I re...

My car is having issues starting up, but if i let it sit for awhile then it starts up but idles roughly. The only way I can get it to start is by pressing on the accelerator, and then if i let go t...

Hello, Yesterday when we came home, I noticed a sweet smell around my car, I know it is a coolant leak, but does anyone know what it could be? Hose? Cap? Just trying to find out so I can get parts

Why Wont Oil Drain From My Car

drained almost 4 quarts of oil from my cart. filter out..oil pan empty...dipstick still showing 2 inches above full mark! something clogged? under 100000kms. well maintained engine. If I was to...