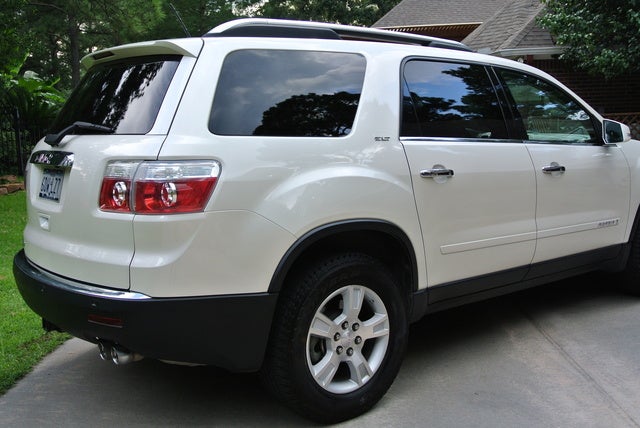 Take the neighbors with you on vacation in the 2009 GMC Acadia, as this roomy crossover SUV easily fits seven people and has a five-star safety record and class-leading cargo capacity for optimal utility.

The large midsize '09 Acadia can be difficult to maneuver in city driving, and too much cheap plastic detracts from its otherwise comfortable cabin. 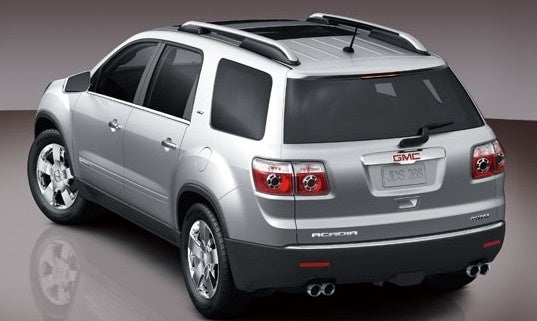 The 2009 GMC Acadia rightly earns rave reviews from critics and owners for its spacious and utilitarian cabin, with family-ready sliding seats, wide doors, a low step-in height, and large storage areas. A decent powertrain, available AWD, and car-like handling give parents the best of three worlds: minivan capacity, SUV utility, and sedan comfort. The tradeoff for the extra room, however, is a larger, heavier, and less maneuverable ride.

For 2009, GM's best-selling crossover gets a direct-injection version of its V8 engine, boosting both horsepower and torque numbers by 5 percent. Other new features for 2009 include two new colors, standard Bluetooth and satellite radio, and an upgraded OnStar 8.0 system with turn-by-turn navigation and the ability to download directions. The navigation system gains a real-time traffic feature. The SLT trims get more options, such as a rearview camera in vehicles not equipped with navigation, heated and cooled front seats, and perforated leather.

Available in SLE, SLT-1, and SLT-2 trims, the 2009 Acadia comes with either front-wheel or intelligent all-wheel drive. The AWD system automatically redistributes torque between the front and rear wheels when it senses slippage. All trims ride on sturdy 18-inch wheels, with the option to boost the size to 19 inches. Well-equipped with all the expected creature comforts families need as well as some higher-end gadgets not often found standard on midsize SUVs, the '09 Equinox also boasts an outstanding safety profile and fairly decent fuel economy for a vehicle of its size.

Although classified as a midsize crossover, in a class with the Buick Enclave, Honda Pilot, and Saturn Outlook, the 2009 GMC Acadia actually measures almost as long and wide as the full-size Yukon. Its class-leading passenger and cargo room and long list of standard features make it a standout for families needing lots of versatile space, making it easy to see why last year's model was named one of the Best Crossover Utility Vehicles by MotorWeek. 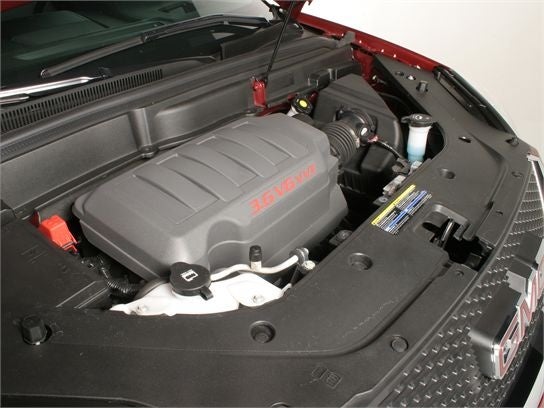 A new direct-injection, 24-valve, 3.6-liter DOHC V8 gives the '09 Acadia a needed power boost. It now delivers 288 hp and 270 lb-ft of torque across a wider power range. The direct injection technology, along with variable valve timing, aims to improve fuel efficiency and reduce emissions, but mileage numbers remain fairly consistent with the 2008 Acadia's. Paired with a six-speed automatic, the powerplant averages 17/24 mpg in front-wheel drive trims and 16/23 in all-wheel drives. Properly equipped, the SUV can tow up to 4,500 pounds.

Power feels confident and strong in highway passing situations, although critics and owners describe a slight hesitation during off-the-line acceleration. The extra power helps, but still feels inadequate to move this 4,700-pound SUV. Most critics find the transmission smooth and responsive, except when downshifting in high-speed conditions.

Built on a unibody platform, with a four-wheel independent Macpherson strut front and multilink rear suspension, the large '09 Acadia rides more like a car than a big SUV, and owners agree it proves much easier to drive than its size and weight would suggest. Test drives show a balanced and controlled ride, with good stability and minimal body roll, although a wide turning circle hampers maneuverability, particularly in city driving and getting in and out of tight parking spots.

The '09 Acadia offers a nicely quiet cabin free of vibration and shudder. Trims riding on the optional 19-inch wheels feel a bit stiffer and pick up more bumps and dips in the road than those with the standard 18-inchers, but nothing too intolerable for passengers. The SLT trims get variable-effort electric power steering, which adjusts wheel feedback according to driving conditions. Lighter, easier steering accompanies low-speed city driving, while a more weighted feel provides better response at higher speeds.

Though the engine can feel somewhat underpowered for the Acadia's heft, the powertrain performs adequately for most families' needs, with a generally smooth transmission that has only a few hiccups when downshifting. Test drivers report that front-wheel-drive trims are quicker off the line than their AWD counterparts.

The 2009 Acadia's cabin and cargo area remain standouts for this large midsize people hauler, with the SUV's 201-inch length and 119-inch wheelbase besting all others in this class. Nearly as big as the Yukon, it combines the passenger capacity of a minivan with the cargo utility of an SUV. The base SLE seats up to eight passengers in three rows, while the SLT trims replace the second-row bench with captain's chairs, reducing capacity to seven (the bench is available as an option). Both rear rows fold flat, even with the captain's chairs, and the second row splits 60/40. Critics and owners find the slide-and-fold function very easy to operate. Wide side doors and a low step-in height ease access to both rows.

The cabin nicely accommodates 6-footers, with headroom measuring around 40 inches throughout. Front passengers get 41 inches of legroom, and the second row stretches out with nearly 37 inches, but legroom in the third row best suits children. Adults will fit, but may find their knees pushed up, especially with the second row all the way back. The second row does slide 3 inches forward and aft to increase legroom or cargo space. Seats provide good support and comfort, but again, taller adults with long legs may find the short third-row bench not supportive enough.

With the seats up, the Acadia holds a class-leading 24 cubic feet of cargo, and this expands to 117 cubic feet with the seats folded flat – more than you'll find in the larger Yukon. The cargo bay contains underfloor storage and tiedowns, and a roof rack is also standard on all trims. A power liftgate comes standard on the SLT-2. Inside the cabin you'll find front and overhead storage consoles, decent-size door pockets, and cupholders for all rows.

Test drives reveal a well-laid-out instrument panel, with alloy-lined gauges and controls within easy reach that are both large and legible. One critics finds the climate control push-buttons less intuitive than traditional knob controls. Drivers get a tilt and telescopic steering wheel with comfortable settings, and the SLT trims add power settings to the front seats. In the SLT-1, you get a 6-way driver's seat and a 2-way passenger. The SLT-2 upgrades to an 8-way driver and 4-way passenger and adds power lumbar settings, with memory controls for the driver. An optional heads-up display lets drivers keep their eyes on the road by projecting driver information directly onto the windshield just above the steering wheel.

The cabin's fit and finish are the only disappointment to professional reviewers and everyday drivers. While the '09 Acadia provides an abundance of gadgetry and comfort-oriented features, too much plastic mars an otherwise high-end interior. Some reported rattling, and many worry that the cheap-looking plastics could show early wear and tear.

The base SLE offers power windows, locks, and mirrors, cruise control, front and rear climate control, and a 6-speaker sound system for the CD/MP3 player. Satellite radio, an MP3 jack, and Bluetooth are also standard. Luxury and convenience improve in the SLT trims. Power front seats, leather upholstery and trim, heated seats, wheel-mounted and second-row audio controls, tri-zone climate control, a trip computer, and an upgraded 10-speaker sound system come with the SLT-1. The SLT-2 adds a cooling feature for the front seats, retractable side mirrors, remote start, and memory settings for the driver. Most of these features can be added as options on the lower trims, along with third-row audio controls, a second-row console, surround sound, and a two-panel sunroof that tilts and slides. A navigation system and DVD player are available only for the SLT trims.

Families should feel safe and secure knowing that the '09 GMC Acadia earns five stars in both frontal and side impact tests and four stars in rollovers. The IIHS named it one of its Top Safety Picks for 2009. Keeping kids and cargo safe, all Acadia trims feature four-wheel disc and ABS brakes with electronic brakeforce distribution and panic brake assist. Traction and stability control provide a balanced ride, and AWD trims offer extra road grip in slippery conditions. Dual-stage front airbags feature passenger airbag cutoff, while the side curtain airbags for each row have sensors that engage the bag early when they detect an imminent rollover.

OnStar 8.0 is now standard on all trims, along with a tire monitor, automatic headlights, and foglights. The SLT trims add mirrors with integrated turn signals and an auto-dimming rearview mirror. An optional rearview camera and backup sensors come standard on the SLT-2 and definitely prove useful for improving the poor rear visibility caused by thick pillars and an inclined beltline. Xenon HID headlamps are also standard on the SLT-2.

According to owner reviews on other websites, the 2009 Acadia easily and comfortably seats eight people, thanks to an incredibly roomy and functional cargo area. Despite its large size, drivers say it handles well and rides smoothly, with good power and surprisingly good fuel efficiency for a large SUV. Families appreciate the easy-fold second row and convenient access to the third row, and its overall comfort and utility make it a perfect family car. Its long list of features, even on the base model, comes with an affordable pricetag, and favorites include the rearview camera, OnStar, and the navigation system.

Drivers do notice slight engine hesitation when trying to accelerate from a standing start, and the poor rear and side visibility necessitate the optional camera and backup sensors. The use of cheap-looking plastic material disappoints some owners, and others worry about its flimsiness. Other minor complaints mention some road noise, the lack of a spare tire on the SLE, uncomfortable headrests that permanently tip forward, and difficult maneuverability caused by the Acadia's size.

CarGurus owners have not yet commented on the 2009 Acadia, but its nearly identical 2008 counterpart predictably earns raves for its spacious and comfortable cabin, smooth handling and quiet ride, and the functional utility of the cargo space. Rear-seat accessibility and the easy-fold seats add to its overall versatility. Drivers like that it has the passenger and cargo capacity of a large SUV, but superior fuel economy. Even so, a few owners wish for better mileage.

Guru9HDDBH I own a 2009 Acadia SLT and I'm very happy with it, the only complain I have is whenever accelarate the car, the odor of the exaust gets inside the cabin.

Users ranked 2009 GMC Acadia against other cars which they drove/owned. Each ranking was based on 9 categories. Here is the summary of top rankings.

Have you driven a 2009 GMC Acadia?
Rank This Car

Coil Pak 1,3 & 5 Not Functioning After I Changed Them?

I Try To Turn On The AC But The Light Flashes Three Times And Goes Out With...

The air conditioner is not coming on when I push the button. The light flashes three times and goes out. The owners book says this is normal when the outside temperature is below 40 F. Im in norhern...

I have an 09 GMC Acadia and it was random Misfiring on 2-4-6 cylinders. Then ran a little bogged out as I limped home. I replaced all 3 coil packs and spark plugs. Ran fine for a day, then ran bog...

With Factory Installed Bench Seating Can I Put In 2nd Row Captain Chairs?

2009 GMC Acadia When Turn Key Lights Come On, No Start

My j2009 GMC Acadia won't start when turning ignition key. Lights come on but no start.

90 views with 2 answers (last answer about a year ago)