Average user score
4.2 ⁄ 5 stars
Based on 16 reviews
2009 Ford Ranger Xlt Crew Cab by Jack — the things i love the most about my ford ranger XLT is that when you put your foot down, it just goes, it sounds awesome, it has the awesome sound of the 3litre Turbo Diesel engine underneath the bone... Read more
Great Performance And Quality At A Great Price by Josh — The Ranger is extremely well built and has an amazing appearance. The brakes are great and acceleration is usually fine. It gets decent gas mileage too. The only negative is that you can feel the truc... Read more
2009 Ranger Sport by Robert — Nicest vehicle I have ever had. traded in my 2006 Altima and have no regrets!! Smooth acceleration, lots of power, you sit nice and high up so easier to see the road and feels solid. One of the nicest... Read more

The 2009 Ford Ranger is an inexpensive workhorse that’s good on gas and is also a better-than-adequate off-road vehicle.

The Ranger for ‘09 has a dated look, few standard creature comforts, and unimpressive safety features.

Though not as refined or luxurious as many small pickups on the market, the 2009 Ranger is nonetheless an economical hauler that also handles itself well off-road. A lackluster exterior, lack of standard features, and iffy interior comfort, however, could be enough to turn off those looking for some pizzazz in their pickup.

Described as the most fuel-efficient pickup in America, the 2009 Ford Ranger is pretty much unchanged after some re-working in 2008. Ford has, however, made the wise decision to drop its clunky and unpopular 3.0-liter V6, to the delight of many owners of ‘08 Rangers. This leaves the ’09 Ranger with its economical but pokey inline four (I4) and a 4.0-liter V6 as the remaining engine choices. After adding a Personal Safety System, a more aerodynamic front bumper, and a tire pressure monitoring system as standard across the lineup in ’08, the Ranger is essentially unchanged for ’09.

Available in four trims - XL, XLT, Sport, and FX4 Off-Road - the ’09 Ranger is available in two cab configurations, Regular and SuperCab, and all except the FX4 Off-Road can be delivered with rear-wheel drive (RWD) or four-wheel drive (4WD). Ranger Regular cab XL and XLT trims are also available with a class-exclusive 7-foot bed as well as the standard 6-footer.

Reviewers find the ’09 Ranger to have a dated style and little refinement. The Ranger simply lacks the performance, comfort, and safety features that make competitors' small and midsize pickups so able to do heavy hauling as well as the commute to work and the family vacation.

The ’09 Ranger is, however, an inexpensive workhorse that's a far more capable off-road machine than many of the more luxurious (and expensive) pickups out there. Its small size and durable frame make the Ranger perfect off the beaten path, and a number of reviewers find the FX4 Off-Road rides surprisingly well on the highway for a vehicle designed to go so far off of it. 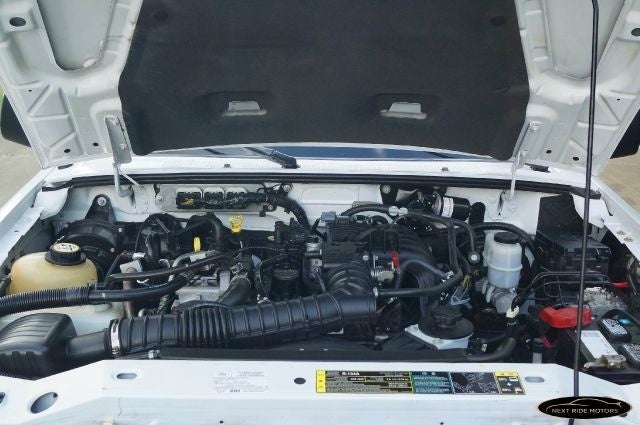 Though it gets decent mileage, the 2.3-liter I4 is found by reviewers to struggle in passing and merging on the highway and to have limited towing power (less than 2,000 pounds).

For 2009, all Ford Ranger trims feature an independent four-wheel suspension. The Ranger has a short- and long-arm front suspension configuration with a front stabilizer bar, and a solid live rear axle. The ’09 Ranger also comes with gas-tuned shocks, power rack-and-pinion steering, and power front disc and rear drum brakes. All Ranger trims but one roll on standard 15-inch steel wheels. The Ranger FX4 sports 16-inch wheels and all-terrain tires as standard equipment. The 16-inch wheels are available options for ’09 Ranger XLT and Sport trims.

Some professional reviewers find the ’09 Ranger to have below-average handling and an interior unsuitable for long trips. An unwillingness to handle poor roads with any sort of aplomb - at least in the XL, XLT, and Sport trims - too much lean in turns, and too little comfort and safety in the available SuperCab rear-seat configuration leaves the ’09 Ranger little to recommend it for any sort of commuting comfort. Some reviewers do find, however, that the Ranger FX4 Off-Road trim does provide a decently smooth ride for a vehicle lauded as one of the best small off-road pickups on the market.

Reviewers find the 2009 Ranger base XL trim light on standard comfort and convenience features, with cloth front seats in the SuperCab, vinyl seats in the Standard cab, and an in-dash AM/FM radio its only offerings.

The Ranger XLT adds chrome exterior trim, air-conditioning, and a CD/MP3 player with auxiliary audio jack. All of the XLT's standard features are options for the XL. The Sport trim offers such additional standard features as a color-keyed grille surround and bumpers, a Class III trailer hitch, and satellite radio.

Professional reviewers find the interior of the ’09 Ranger cramped and uninspiring, but reasonably quiet. The inward-facing rear seats are described as “cramped” and far more useful as cargo space. Professional reviewers find the Ranger to have decent leg- and headroom, but more than two adults up front will be more than a little too close to each other for comfort. Though the available rear half-doors on the Ranger SuperCab trims make entry and egress marginally easier, they are difficult to maneuver around in tight parking spaces.

The National Highway Transportation Safety Administration (NHTSA) awarded the ’09 Ford Ranger four and five stars in front and side impact tests and a three-star rollover rating. The Insurance Institute for Highway Safety (IIHS) gives the Ranger their second-highest rating of “acceptable” in front impact testing, and a third-place rating of “marginal” in side impact tests.

Professional reviewers find the ’09 Ranger not the most safety-endowed small pickup on the market, with one reviewer noting that the available inward-facing rear seats in the SuperCab are not only uncomfortable, but unsafe as well.

Most owners of the 2009 Ford Ranger are unimpressed with its uncomfortable seats, lackluster exterior - though a couple of owners did mention styling as one of the Ranger's strengths - in the base XL at least, the lack of standard comfort and convenience features. A few owners are also disappointed with the mileage they get with the 4.0-liter V6 engine. Other owners are unimpressed with the acceleration of the I4, though they do applaud its fuel economy.

Most owners, however, find the ’09 Ranger tough, reliable, and able to stand up to the rigors of everyday driving. Some owners note that the available 4.0-liter engine is more than adequate for towing and off-roading, while others praise the Ranger's styling, available audio upgrade, and maneuverability. A few owners are pleased, as well, with the Ranger's rubber floormats, which are much easier to clean than carpet. By and large, owners recognize the ’09 Ranger's flaws, but find its price and capabilities hard to beat.

Kayno I've had my 2009 Ranger for 2 years I bought it with 39000 original miles I have not had a problem with it I pull my four wheeler snowmachine trailer of Blaze totally loaded up hills and down Hills and I've had no problem with it it's got plenty of power and it's good on gas . the heater blowing cold air is the first real challenge I have had.

Have you driven a 2009 Ford Ranger?
Rank This Car

Does anyone have an issue w/ his truck when turning front wheels and the 4x4 engaged? I feel like I have the hand brake applied. Everything looks fine when I drive straight forward. It was very dif...

Does a 2005 ranger rear end fit 2009 ranger? 2wd on both. What years are interchangeable on rear ends?