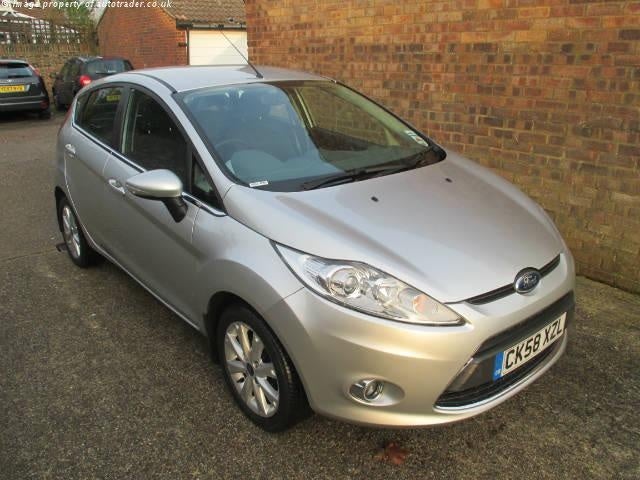 The U.S. is expected to become a bit smaller in 2011 with the introduction of the Ford Fiesta. Ford is counting on this subcompact, a huge hit in Europe, to eventually take over the world. Available in Europe since the mid-‘70s, and soon to be available in Africa and Asia as well as the U.S., the ’09 Fiesta debuted in 2008 as the Verve concept, and is available there as a three-door hatchback, a five-door hatchback, and as a sedan.

For 2009, the Ford Fiesta is available with a choice of five engines and two transmissions. Engines run from a 59-hp, 1.3-liter four cylinder (I4) gasoline engine to a 118-hp 1.6-liter premium-gas-only I4 that allegedly puts out 150 lb-ft of torque and was tested at a lackluster 0-60 in 11.9 seconds. However, once the 1.6-liter does get under way, highway passing and merging acceleration is more than adequate. A bonus is that the 1.6-liter I4 gas engine managed an average of 39.9 mpg, which is almost as good as a MINI Cooper. Two turbodiesels are also among the powerplant choices, a 67-hp, 1.4-liter I4, and an 89-hp 1.6-liter I4.

A five-speed manual transmission is standard for the ’09 Fiesta, with a four-speed automatic available only with the final engine choice, the 95-hp 1.4-liter I4 gas engine. The five-speed manual tranny is described as smooth enough, but with a rather long throw to be considered truly sporty.

With an electrically operated power-steering system, a new, high-strength-steel chassis, 16-inch tires, and an available sport-tuned suspension, the 2009 Ford Fiesta handles well in the corners and provides an exceptional highway drive.

The European version of the ’09 Fiesta has a well-designed cabin with a multi-function panel that tops off the attractive center stack and provides easy access to audio and climate controls. Bluetooth technology dominates the European Fiesta, with Ford’s SYNC system expected to be available on U.S. trims.

Safety-wise, the 2009 Fiesta includes the Intelligent Protection System featuring as many as seven airbags, including front, side, and supplemental side curtain airbags, as well as stability control and four-wheel ABS.

Ford has yet to decide which engine(s) will equip the U.S. versions of the Fiesta, and, in fact has not even committed to a name as yet, Fiesta being the working moniker for the time being. Expect the five-door hatchback and sedan versions of the Fiesta to arrive first, with the three-door hatchback remaining in the European market. For now, keep in mind that good things happen to those who wait.

Have you driven a 2009 Ford Fiesta?
Rank This Car

Fiesta Coolant Fan Stays On All The Time

Coolant fan does not turn off and it drained the battery

959 views with 4 answers (last answer about a year ago)

Ford Fiesta 2009 All Lights On And Not Starting

What could this be?? Ford Fiesta 2009 not starting or when ever it wants to. All lights come on and service lights, rev counter jumps up and down and even replased eart to body and engine. Car is a ...

Front Noise When Driving Over Bumps

Pops out of gear in 4th and 5th gear any suggestions? Ty in advance