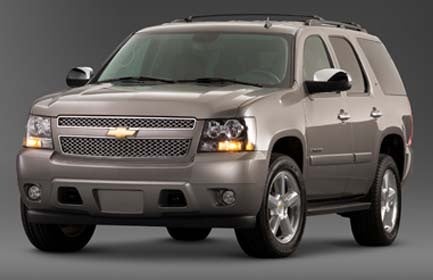 The 2009 Chevrolet Tahoe delivers a smooth ride, surprisingly nimble handling, good safety features, and a roomy, well-appointed cabin, which seats up to nine passengers and comes equipped with enough bells and whistles to make owners forget about luxury sedans from foreign automakers.

The '09 Tahoe's fuel economy remains a sore spot with some, although Chevy has taken a number of innovative steps to improve the big SUV's mileage ratings.

In many ways, the 2009 Chevy Tahoe sets the standard in the full-size SUV category and will appeal to drivers who require a large vehicle for towing boats or trailers or hauling around big families and their gear. The Tahoe has come a long way in recent years, impressing owners with its upscale cabin, easy handling, and overall functionality. Add in state-of-the-art safety features, high-end luxury options, and improving fuel efficiency, and the Tahoe will win over even those who are jaded about many of today's gas-guzzling SUVs.

For big jobs like trailer-towing and carrying large families with lots of gear, the 2009 Chevrolet Tahoe remains the SUV of choice for many drivers. With its powerful V8 engines, the Tahoe can tow up to 8,500 pounds, and thanks to three rows of seats (now standard in all Tahoe trims), the big SUV can carry seven to nine passengers, depending on seating configuration. In addition, despite its size, the Tahoe handles surprisingly well, remaining light and nimble on its feet even in turns, according to drivers and reviewers.

In addition to a standard third-row seat, the Tahoe receives a new six-speed transmission for 2009. Available on all but the base LS trim, the new transmission was designed to improve fuel efficiency, if only slightly. The '09 Tahoe also receives standard Bluetooth wireless technology for all trims, and for those who require even more power, Chevy adds a new 395-hp, 6.2-liter V8 engine to the Tahoe's list of powerplants. Available as on option on the top-of-the-line LTZ trim, the new V8 borrows elements from engines powering the Cadillac Escalade and the GMC Yukon Denali.

The Tahoe last received a redesign in 2007, when it was named Best Large Utility by Motor Week, among other awards. The 2009 Tahoe comes in LS, LT, and LTZ trims, as well as a gas/electric Hybrid. All trims come with either rear-wheel drive or GM's Autotrac four-wheel-drive system, which includes a low-range off-road gear.

Also new for 2009, Chevy introduces a Tahoe XFE (Xtra Fuel Efficiency) designation, which comes standard on the LT rear-wheel-drive trim and is available as an option on the LS rear-wheel-drive trim. The XFE provides better fuel efficiency thanks to a combination of aerodynamic, mechanical, and mass-reducing enhancements. Trims tweaked for the XFE designation deliver a 5 percent increase in highway fuel economy and more than 7 percent improvement in fuel economy for city driving, according to Chevy.

The '09 Tahoe comes with a choice of four powerplants, plus the Hybrid engine. A 295-hp, 4.8-liter Vortec V8 engine generating 305 lb-ft of torque powers the rear-wheel-drive LS trim. All other gas-powered trims, including the LS four-wheel-drive trim, come equipped with a 320-hp, 5.3-liter Vortec V8 generating 340 lb-ft of torque and managing fuel mileage ratings of 14/20 mpg. However, the same V8 engine tweaked for trims with the XFE designation generates 310 hp and 335 lb-ft of torque, resulting in a fuel mileage rating of 15/21.

Drivers can opt for a FlexFuel version of the 5.3-liter V8, which runs on E85 ethanol fuel. It's available in all trims except the Hybrid. In addition, a new Vortec 6.2-liter V8 engine, available as an option on Tahoe LTZ, pumps out 395 hp and 417 lb-ft of torque.

The Tahoe Hybrid combines a 6.0-liter V8 with an electric motor for a total of 332 hp. The Hybrid powerplant links to a continuously variable transmission (CVT), and includes regenerative braking. The combination results in relatively good gas mileage for a large SUV, managing 20/20 mpg. Like the 4.8-liter and 5.3-liter gas V8s, the Hybrid utilizes an Active Fuel Management system, which shuts down four of the engine's eight cylinders when extra power is not needed, improving fuel economy. The Hybrid can tow up to 6,200 pounds.

The 2009 Tahoe rides on a full-size pickup truck platform (which it shares with the Chevy Suburban) and delivers surprisingly good handling and acceleration, according to numerous drivers and reviewers. Although it exhibits some minor leaning in tight turns, the Tahoe maneuvers well through twisty roads and provides agile, responsive handling in tight spots, thanks to its Smooth Ride suspension. The brakes engage smoothly and firmly, and do a good job of stopping the big SUV in a reasonable distance.

To further improve ride comfort and handling, the high-end LTZ trim comes with an Autoride suspension as standard equipment. The Autoride suspension monitors the road surface, speed, gas and brake pedals, and other inputs and continually makes adjustments to the shock damping rate to provide a smoother ride. The system also includes a rear self-leveling feature, which maintains the proper rear level when towing a heavy trailer or when the SUV is fully loaded.

The Tahoe's seats are comfortable enough for long-range trips, and although they lack bolstering, they're easy to slide into and out of. Most agree that adults will find third-row legroom tight, although headroom in the third-row seat seems acceptable. Getting into and out of the third row can be tricky, though, so it's best suited for children.

Like its ride and handling, the Tahoe's interior receives good marks from drivers and reviewers, who like the high-quality materials and components. In fact, many compare the Tahoe's cabin to an upscale sedan's, with a stylish dashboard, soft surfaces, and upscale finishes and details.

Some dock the Tahoe's interior a few points due to its rear seat, which must be removed to expand cargo space, rather than simply folded down. Removing the seats can be an awkward process, some note. With the third seat in place, the Tahoe offers 16.3 cubic feet of cargo space (less than the Ford Expedition and much less than the Chevy Suburban), but cargo space expands to 63.6 cubic feet with the third row of seats removed (slightly better than the Expedition). With the second row of seats folded down, the Tahoe provides an expansive 104.6 cubic feet of cargo space.

The 2009 Chevy Tahoe scores well on safety tests administered by the National Highway Traffic Safety Administration, achieving a five-star safety rating (the highest possible) in front and side impact tests. However, the Tahoe receives only a three-star rating in rollover tests.

A low, wide stance helps the Tahoe keep its feet on slippery roads or in emergency situations, and a StabiliTrak Electronic Stability Control System with Proactive Roll Avoidance, which comes standard on all trims, also helps the big SUV maintain its balance. Other standard safety features on all trim levels include dual-stage front airbags, head-curtain side-impact airbags for all three rows, four-wheel antilock disc brakes, and the OnStar emergency communication system with a one-year Safe and Sound Plan.

Many owners are effusive in their praise for the Chevy Tahoe, and some call it the best SUV available today. The Tahoe's nimble handling, smooth ride, comfortable interior, and good road view from the driver's seat impress drivers, as do the Tahoe's safety features and overall value. Owners are mixed about fuel economy. Some are satisfied with the SUV's mpg ratings but others are unimpressed. Owners also like the Tahoe's many options, including the navigation and DVD entertainment systems. Most agree that, even in an era of seesawing gas prices, the Tahoe represents a good buy.

CarGurus owners concur, giving the Tahoe good marks for its performance, smooth ride, cargo space, and hauling power. They also like its exterior styling, comfortable seats, and interior roominess. Some describe the Tahoe as a gas guzzler, but overall owners remain very loyal to their Tahoes.

What's your take on the 2009 Chevrolet Tahoe?

JalisaB I like it I'm looking to buy one soon but scared of the gas mileage. I drive back an forth daily at least 3 tyms a day

Users ranked 2009 Chevrolet Tahoe against other cars which they drove/owned. Each ranking was based on 9 categories. Here is the summary of top rankings.

Have you driven a 2009 Chevrolet Tahoe?
Rank This Car

I am looking to change my 2nd row bench seat into captain's seats (2009 LT charcoal/ebony fabric). Has anyone done this successfully and if so, how do I go about doing this?

I have a 2009 Chevy Tahoe with 60/40 black(ebony) leather bench for middle row and looking for captains chairs.

The Backseat In My 09 Tahoe Gets Wet During Rain.

Just had car in for repair. They decided it was seal around door, replaced that and charged me almost $800. Had a lot of rain 2 days later and backseat was wet again. Took it back to shop today and ...

Truck Would Not Crank This Morning

What could be going on with my 2009 Chevrolet Tahoe. This morning my husband for up to crank it and it wouldn't crank.