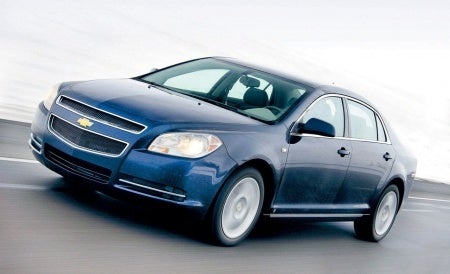 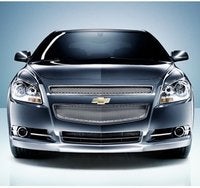 The 2009 Chevrolet Malibu features two powertrain choices, a long list of standard creature comforts, and a large and comfortable interior that's perfect for families on long trips, making it easy to see why this midsize sedan won North American Car of the Year at the 2008 North American International Auto Show.

Low fuel economy and less-than-stellar resale value put the 2009 Malibu at a disadvantage against the Accord and Camry, while its underpowered inline-four engine and practically useless hybrid model fail to distinguish this sedan in one of the more competitive automotive segments. 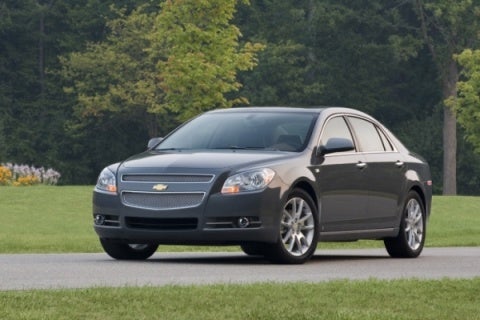 For those looking for a family car with plenty of space and passenger comfort who prefer to buy American, the 2009 Malibu represents a sound alternative to foreign competitors. Going beyond the typical family sedan, the Malibu offers a higher-end look and feel than many of its competitors. However, the 2009 Malibu is not geared toward fuel economy, despite the misleading presence of a hybrid model, and those seeking gas savings might want to take a look at a comparably sized and outfitted Camry or Accord.

Since undergoing a major redesign in 2008, which resulted in a longer wheelbase, more interior room, added sound insulation, and an upscale makeover, the 2009 Chevrolet Malibu returns virtually intact this year. One addition is the availability of the 2.4-liter inline-four engine in the top-of-the line LTZ trim, which was previously offered only with the 3.6-liter V6. The LTZ is the only trim that pairs the four-cylinder with the six-speed shiftable automatic transmission. The midsize Malibu sedan competes directly with the Toyota Camry, Honda Accord, and Ford Fusion, but offers more comfortable passenger room and plenty of cargo space at a lower price point than its competitors. This makes it an attractive family car, as even the base trim comes with a long list of standard features.

Borrowing the Pontiac G6's platform, the 2009 Malibu cuts a sleeker profile than earlier cars, with a sloping windshield and raked roof line, chrome trim, and dual front grilles. It comes in five trims: the base LS, LT1, LT2, sporty LTZ, and Hybrid. All trims come standard with an inline-four engine, while the LT1, LT2, and LTZ trims also offer a 3.6-liter V6. The Hybrid is a “mild” rather than a full hybrid, meaning the electric motor does not contribute to acceleration power and adds only a few mpg to its fuel economy, leaving many reviewers to question its value. 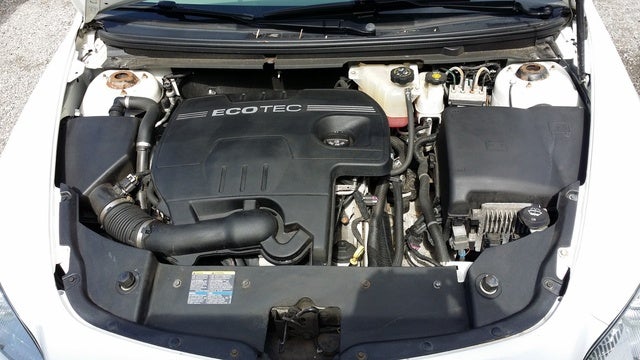 All trims come standard with a 2.4-liter Ecotec inline-four engine, which puts out 164 hp and 160 ft-lbs of torque at 4,500 RPM. The engine can get this large midsize sedan from 0 to 60 in just under 10 seconds, and fuel economy averages 22/30 mpg for the midsize Malibu. The base LS trim pairs the engine with a four-speed automatic transmission, while the LT1 and LT2 offer the four-speed or a six-speed automatic. The LTZ features only a 6-speed automatic with shift paddles. Optional for all trims but the LS is a 3.6-liter DOHC V6 engine. Significantly reducing fuel economy to 17/26 mpg, this engine delivers 252 hp and 251 ft-lbs of torque at a low 3,200 RPM, with a more impressive 0-60 time of 6.6 seconds.

Featuring the 2.4-liter four-cylinder Ecotec, the Hybrid trim also features a 36-volt electric motor and NiMH battery, which add 5 horsepower, boosting ratings to 169 hp. Paired with its own four-speed hydramatic automatic transmission, this engine delivers 159 ft-lbs of torque at 5,000 RPM and a noticeably slower 0-60 time of around 11 seconds. The hybrid features regenerative braking and engine cut-off while idling or when the car comes to a stop. Since it is not a dual-mode hybrid, the electric motor does not help with acceleration or provide more driving power to the gas engine. Rather, it restarts the engine after cut-off. Car reviewers have questioned its usefulness, especially since the Hybrid's 24/32 mpg rating is only slightly higher than the 22/30 of the standard four-cylinder, despite costing nearly $4,000 more. 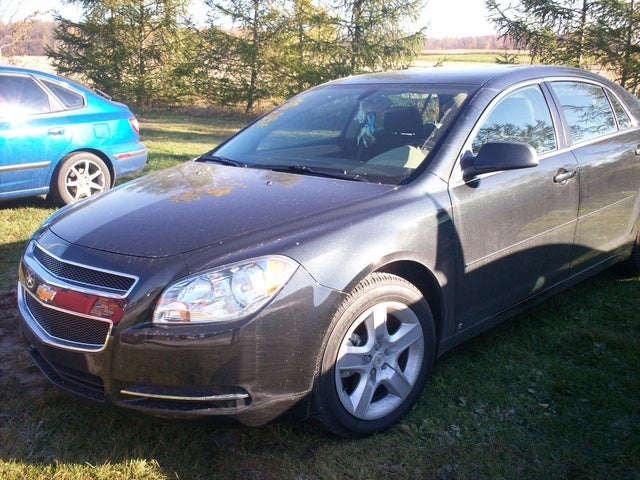 The 2008 redesign added thicker glass, a more rigid platform, and extra sound insulation to provide what many reviewers and owners call a quiet, stable ride. The four-door Malibu exhibits limited body lean and is relatively smooth over rough roads. Bumps become a bit more noticeable as you move up in trim level, which gradually increases the tire size. The LS uses 16-inch alloy wheels with all-season tires, while the LT trims feature 17-inch wheels, and the LTZ adds 18-inch wheels.

The LTZ also offers hydraulic power steering, which provides a more responsive feel behind the wheel than the electric power steering in the other trims. Combined with its V6 engine, this makes the LTZ the most fun and most powerful trim. Some complain about noticeable torque steer with the 6-speed shiftable automatic, though.

While hardly packing in the driving excitement, the 2009 Malibu does impress owners with its acceleration power and smooth maneuverability, though the inline-four engine naturally pales in comparison to the V6's performance during passing maneuvers at highway speeds. 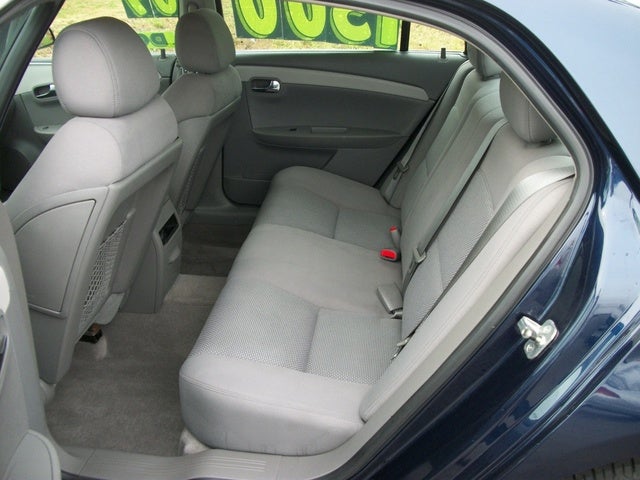 The 2009 Malibu prides itself on its upscale interior, designed to improve overall comfort in what is essentially a family sedan. Creating a sporty cockpit-like feel, a dual-pod dash wraps around both front seats, dividing them with a center console that contains storage units. Chrome outlines the instrument panels, with the option to add wood trim.

The sedan seats four or five adults comfortably, with 42 inches of front legroom and 37.6 inches in back. Headroom accommodates 6-footers, though the sloping rear roofline can feel a bit snug. All trims feature split-folding rear seats with a pass-through to the 15.1-cubic-foot trunk. The front passenger seat also folds flat to carry longer objects. The trunk opens wide and can be outfitted with a cargo net. The front dash includes supplemental storage bins.

Base LS trims start with power locks, windows, and mirrors, a 2-way power driver's seat, remote entry, cruise control, intermittent wipers, tilt and telescopic steering, a trip computer, and Bluetooth. The dash features a temperature readout and tachometer. A CD player comes with an MP3 jack and satellite radio. Moving to the LT1 adds wheel-mounted audio controls, while the LT2 boosts luxury with a leather steering wheel, heated front seats, remote start, power-adjustable pedals, and auto-dimming mirrors. The LTZ offers leather upholstery, an eight-speaker sound system that includes a 6-CD changer, heated mirrors, and an 8-way driver's seat and 6-way power passenger seat. Most of these features are available as options on the lower trims. The LT2 and LTZ can also add a sunroof that stretches nearly the whole length of the cabin.

Many owners and reviewers mention the expansive interior space as a high point for the Malibu. The easy instrument layout and overall ergonomics also earn praise. Seats are generally comfortable, but could use extra padding, along with the armrests and steering wheel. The general consensus seems to be that the interior layout and capacity of the 2009 Malibu is comparable to or even exceeds that of the Honda Accord and Toyota Camry. 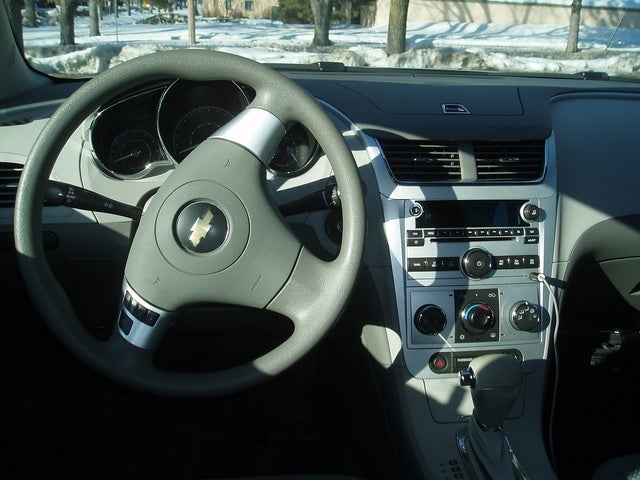 All Malibu trims feature 4-wheel disc and ABS brakes with electronic brakeforce distribution and brake assist, front and rear stabilizer bars, traction control, and dual front-side and side curtain airbags for both rows. Stability control is standard on all trims but the LS. Automatic headlights contain halogen lamps, and the LTZ adds standard foglights. OnStar includes its own navigation system (a separate navigation system is not offered, even as an option, for the 2009 Malibu).

Earning five stars from the NHTSA in both frontal and side impact tests and a Good rating from the Insurance Institute, the 2009 Malibu offers security as well as comfort for family needs. 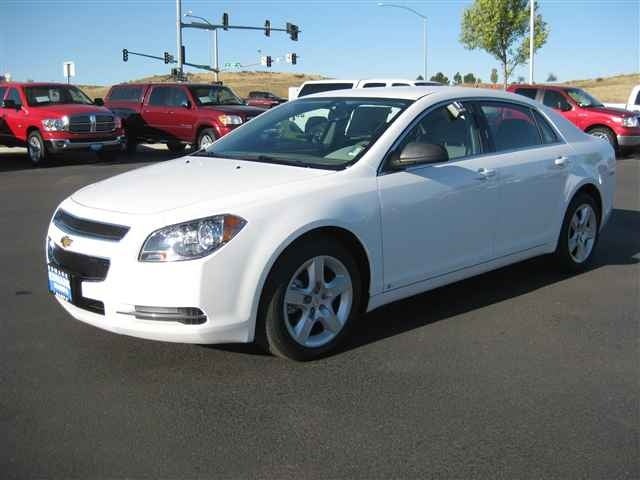 The few owners that have submitted reviews have yet to find fault with the 2009 Malibu. The biggest complaints focus on its poor fuel economy. The overall comfortable and quiet ride are highlights, but users generally agree that the four-cylinder engine lacks the power to adequately propel this large midsize sedan, while some say the V6 offers a smoother ride.

What's your take on the 2009 Chevrolet Malibu?

Guru954X5 I love my 09 malibu, comfortable, reliable, and I get excellent gas milage 30/40-45 yet after 200,000 miles - had to replace both cat's and now my first gear went out and I can't find where the shifting cylinder goes

Have you driven a 2009 Chevrolet Malibu?
Rank This Car

I Am Having Stalling Issues When Im At A Stop Light Or Sitting In Parked Ca...

I have be have this intermittent stalling issue for a few weeks now. When i come to a stop the rmp needle goes up and down and then it jerks like its gasping for gas. I took it to the dealership the...

I had a rebuild motor put in my car as well as the capilers replaced. I got my car back the esc off service traction control lights flash on and off and it’s like car is going to stall on me. Also ...

Car not turning over

i have 2009 chevy malibu and we just replace driver side doors before the running perfect and now wont crank...i dont have any problem whit the alarm system i need son help thanks

I Have A 2009 Chevy Malibu, When I'm Driving They Door Locks Keep Locking A...