Chevrolet has recognized the market potential for fuel-efficient automobiles and has thrown its 2009 Cobalt into the mix, earning top-dog status in this compact but growing class.

While luxury gizmos make the 2009 Cobalt an attractive proposition, all its bells and whistles won’t trump interior space as the number one component to comfort, and this is its weakest category, along with all trims other than the SS’s lack of a fun-to-drive gene. 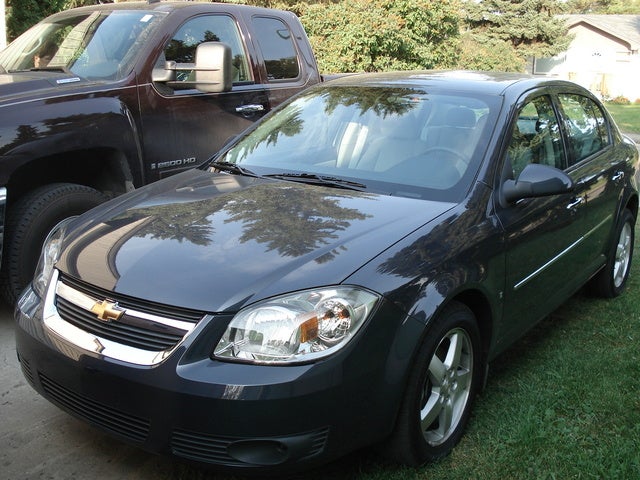 If the gas pump is the major burden in the driving equation, then the Chevrolet 2009 Cobalt carries it extremely well, offering supreme fuel efficiency in a smart looking car-about-town. GM has provided performance at a low price point and has done so in the areas most appealing to economy-minded drivers, even if quality and space have been compromised.

Chevrolet’s 2009 Cobalt takes its place in the competitive field of fuel-efficient compact cars and doesn’t disappoint. Its rivals - the Volkswagen Jetta, Honda Civic, Toyota Corolla, and Ford Focus - are all jockeying to be top dog in this class. But with an official EPA fuel rating of 25/37 mpg, this 5-passenger family ride that Chevrolet touts as a "premium small car" makes its claim as the envy of the pack.

Its efficiency comes from the manufacturer’s smart decision to make over the Cobalt and create the XFE, “Xtra Fuel Economy,” version. To do this, Chevrolet said it used “revised engine calibration, low rolling-resistance tires, a new 3.74:1 final drive gear ratio and other technologies” that added up to a 9 percent improvement in overall fuel economy. Available as either a two-door coupe or four-door sedan, the 2009 Cobalt comes in three trims: the LS, the LT, and the SS Turbocharged. All trims are front-wheel drive. The SS sedan is new for 2009, as is an added 7 hp in the LS and LT engines.

The Chevy Cobalt is built on GM's Delta platform, which it shares with the domestic Saturn Astra and European-market Opel Astra. But with its single-bar grille and bowtie emblem, the Cobalt looks like a proper Chevrolet small car, right down to its lug nuts. The body panel fits are extremely tight - so tight, in fact, that there are no rubber trim gaskets around Cobalt's compound complex headlamps. The fastback coupe bears a resemblance to the Cavalier it replaced in 2005, right down to its high, rounded tail and triangular rear quarter windows, though that’s where the comparison ends. With the sedan dressing less like its curvier predecessor, and more like a contemporary small sedan, with a tall roofline and short, chunky tail, you could say the 2009 has been brought up to vogue. 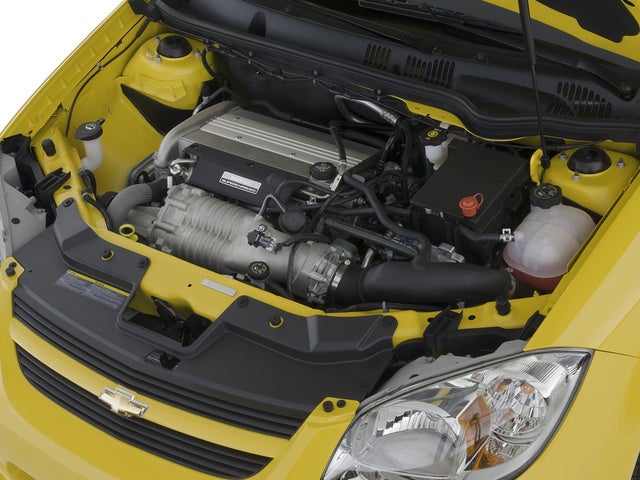 Most of the changes to the 2009 Cobalt were made to the engine. Its 2.2-liter Ecotec four cylinder now has variable valve timing and is more efficient than its predecessor, developing 155 hp, instead of the previous 148. A 5-speed manual transmission with overdrive is standard, and a 4-speed automatic transmission with overdrive is optional. The 2.2-liter is a smooth drive, but does not feel powerful until it’s revving high. The 4-speed automatic doesn’t dispel this fact, dispensing a kickdown similar to a rental car’s that is the hallmark of overextended performance.

In contrast, the SS Turbocharged Coupe is fitted with a lusty turbocharged 2.0-liter inline four that produces 260 hp and 260 lb-ft of torque. This engine clocks an impressive sub-6-second 0-60 acceleration time. The coupe version recently set a Nürburgring lap record for a front-wheel-drive car, posting a time of 8 minutes, 22 seconds (beating the previous record by 13 seconds). Its 22 mpg in the city and 30 mpg on the highway are nothing to sniff at, and it comes with a standard 5-speed manual transmission with overdrive.

The ’09 Cobalt doesn’t drink much, and when it does, it’s content with 87 octane fuel. Furthermore, while the Cobalt isn’t much associated with towing capacity, the LS and LT trims can haul a 1,000-pound load. Best of all, the Cobalt’s 13-gallon fuel tank can take it as far as 325 miles around town and 481 miles down the highway. 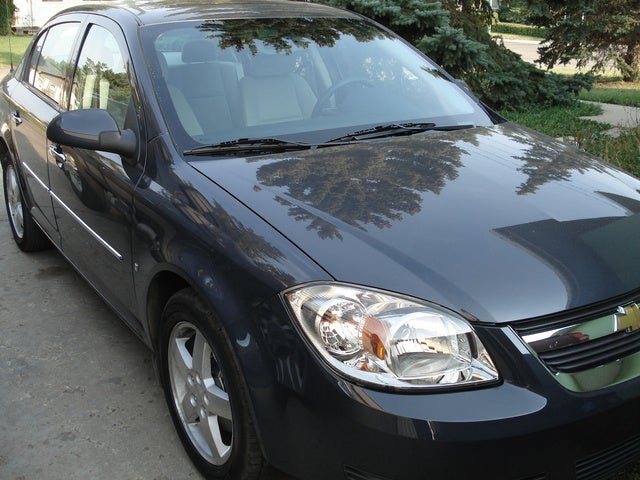 Clearly a cut above previous-generation GM small cars, the 2009 Chevrolet Cobalt gives a reasonably brisk performance with ride comfort that’s better than expected. Generally, it offers an enjoyable driving experience – apart from the exhaust noise. Its suspension is more effective than those in some other GM automobiles, with a firm, direct feel. Only the nastier bumps and potholes are likely to be bothersome. With its easy-shifting automatic transmission, this sedan accelerates enthusiastically enough for its class. In the case of the LS, its nimble handling is accompanied by well-assisted, confident steering and standard 15-inch steel wheels (18-inch aluminum wheels on the SS Turbocharged), which enhances agility in around-town driving and stability on the highway. Its well-behaved automatic transmission responds nicely. While accelerating, the Cobalt can sound almost like a mini-foghorn, a note that may entice some drivers but annoy others. On the plus side, road noise is minimal. 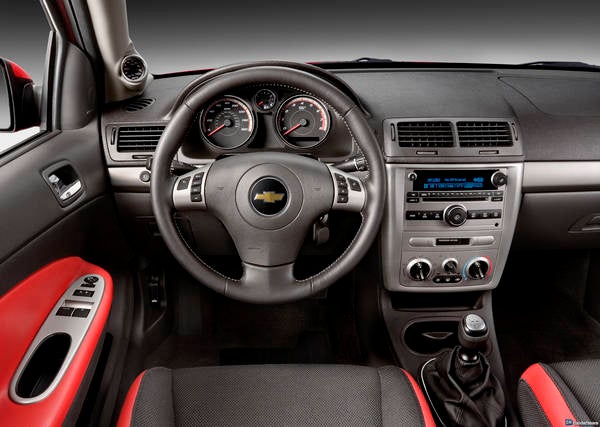 2009 Chevrolet Cobalt sedans have a high seating position for a more commanding view of the road, and all-around visibility is impressive. The interiors, crafted to offer five-passenger seating, are attractive, if rather basic. The only gauge on the instrument panel is for fuel level - digital readouts deliver the remaining data. Front passengers enjoy good head, leg, and elbow space, but rear-seat passengers must accept a somewhat confined space and an average-size person may have trouble getting in and out of the rear of the coupe. Other features that make the sedan inviting are a height-adjustable three-spoke steering wheel and adjustable front head restraints. The LT trim adds front and rear carpeted floor mats, premium cloth seat trim and power mirrors, windows, and door locks with remote keyless entry (available only with the automatic transmission). The 60/40-split rear seatback includes a pass-through to the trunk, which holds 13.9 cubic feet of luggage. In the name of driver and passenger comfort, the 2009 comes with standard air-conditioning, a pleasant AM/FM stereo radio and CD player with MP3 playback and auxiliary input jack. Thrown into the SS Turbocharged luxury package is a leather gear shift knob, a leather steering wheel, cruise control, and an upgraded radio. But the two big pluses are the XM Satellite radio, which is standard on all models, and the feature which really gives the 2009 Cobalt a leg up over its competitors is OnStar, a system available only in General Motors vehicles. If you have a question about anything, just press a button and a person will respond to answer. 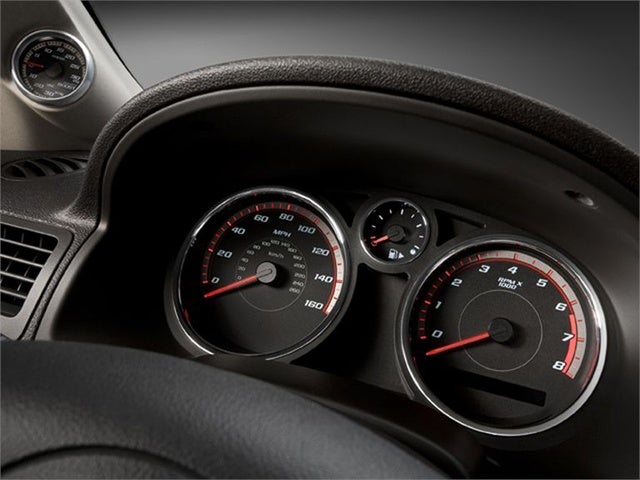 In NHTSA frontal crash testing, the two-door Cobalt earned a four-star rating for the driver and five stars for the front passenger. Side-impact testing produced four-star scores for both front and rear occupants. The four-door Cobalt got the same frontal-impact rating, but side-impact testing produced a three-star score for front occupants and five stars for those in the rear. The Insurance Institute for Highway Safety (IIHS) gives the Cobalt a Good rating for frontal impact, and an Acceptable in side-impact testing. Side-curtain airbags are standard, but antilock braking is standard only on LT2 trims – it's optional on others. 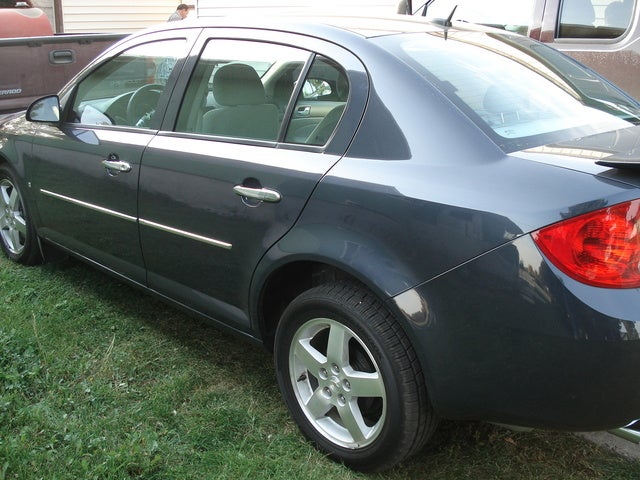 Obviously, in today’s world, the Cobalt’s out-of-the-park fuel efficiency garners rave reviews. The mark of this car’s gas economy is that it’s taking buyers away from the lauded Prius. Owners also enjoy its handling and its muscular-looking outer shell that turns heads. The standard inclusion of XM Satellite radio and OnStar contribute to the car’s general appeal. Interior space is a consistent drawback to the car, with “cramped,” “if you’ve got three kids, get a Tahoe,” or “a good two-person car” describing owners’ feedback. CarGurus.com users give a nod to fuel efficiency and the added extras, and a bigger nod to the SS Turbocharged, with “super fast” and “super easy” being the compliments of choice.

What's your take on the 2009 Chevrolet Cobalt?

George I really like my 2009 Cobalt LT 2 door coupe. The car is loaded and drives amazing, with a ride that feels like a much larger car. I've got the yellow color, and a custom black spoiler, which make the car look even more sporty. I'm going to hang on to this car for as long as I can. With regular maintenance I think it will last a long time.

Have you driven a 2009 Chevrolet Cobalt?
Rank This Car

Is Battery Ventilation Tube Suppose To Be Tight On The Port?

I just replaced the battery in Chevy Cobalt 09. However the ventilation tube has a slit in it and it slides off the port from the battery. I don't think it should be doing this but want to make su...

Has Any One Els Came Across This?

Working on a 2009 Chevy cobalt with 2.2. Car cam in and would just crank. Another shop put a pcm and fuse box in it and it didn’t do any thing. I removed the tracker out of the car and got it to cr...

My cobalt keeps tripping for a bad MAF that has now been replaced 3 times, after the sensor starts reading as bad I then get the message popping up for engine power reduced and am unable to accelera...

Car Hard To Start After Running

Car starts then after I turn it off and run into store and try starting it again it acts like it doesn't want to start.