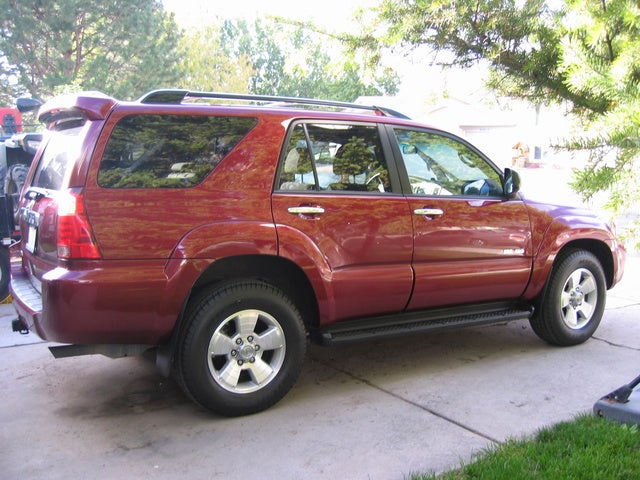 The 2008 Toyota 4Runner is carried over from the 2007 model year, but all trims gain side and curtain airbags as safety features. Toyota's midsize SUV received a full overhaul for 2006, alongside the Tacoma pickup.

In the past twenty-five years, Toyota's 4Runner has evolved from a modest two-door pickup variation into a sleek and rugged-looking midsize SUV. The cars of the early- and mid-1980s simply resembled capped pickup trucks, but the 4Runner of the 21st century has its own unique style, set significantly apart from its closest relative, the Tacoma pickup.

This fourth-generation 4Runner has received owner and reviewer acclaim for its ideal blend of a luxurious interior environment and its rugged and capable exterior. The abundance of standard safety items is also a greatly appreciated feature, along with a strong 5,000-pound towing capacity, nimble handling for an SUV, and reasonable gas mileage despite its size and power. Shortcomings are often attributed to minor creature comforts like interior illumination, the lack of rear climate controls, and the awkward placement of some controls.

There are currently a dozen 4Runner variations, thanks to three trim levels, each composed of four variants. There are V6 and V8 engine options, each available with either two-wheel or four-wheel drive. Trims include SR5, Limited, and the Sport Edition. The SR5 is the entry point in the 4Runner lineup, and it includes automatic climate control, keyless entry, a CD player, trip computer, and power windows, locks, and mirrors. The Sport Edition adds power seats, 17-inch wheels, and a leather-wrapped steering wheel. The top-shelf Limited trim gains running boards, dual climate control, 18-inch wheels, leather, and heated front seats. The options list is extensive for all models. It includes a DVD-based navigation system, Bluetooth, backup camera, rear seat DVD entertainment, and a premium JBL audio system with a 6-disc changer.

For powerplants, buyers may opt for the 4.0-liter V6, which generates 236 hp and 266 lb-feet of torque. The larger engine is a 4.7-liter V8 that produces 260 hp and 306 lb-ft of torque. Both engines utilize Toyota's VVTi variable-valve-timing system for improved fuel economy, and both are paired with a five-speed electronically controlled automatic transmission. Two-wheel-drive 4Runners with the V6 have an EPA rating of 18/22 mpg. V8 models fall to 17/20 mpg. The 4x4 4Runners equipped with the V6 are rated at 17/21 mpg, and the V8s at 16/19.

Have you driven a 2008 Toyota 4Runner?
Rank This Car

What Year Tacoma And Tundra Are Compatible With An 08 4runner Sport Additio...

I have an 08 4runner sport edition and want to swap out the grill for a newer grill that says Toyota to change up the looks a little and was wondering what years are interchangeable. looking at tac...

What Happens To Trucks Flooded With Water- Can They Still Be Drivable With ...

I planned transferring funds to my a friend in Boston, MA to buy me a toyota 4runner 2008 year model. He said his search areas are dealers in NY,NH, MA, CT. My worry is that these areas had been flood...

498 views with 7 answers (last answer about a year ago)

Does 2008 Toyota 4Runner V6 Engine Have A Timing Chain Or A Timing Belt?

Is There A Difference Between The 2008 Toyota 4runner Limited Sold In The U...