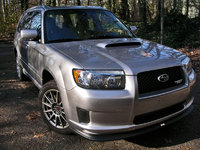 It may be boxy, but the Forester's shape makes perfect sense. 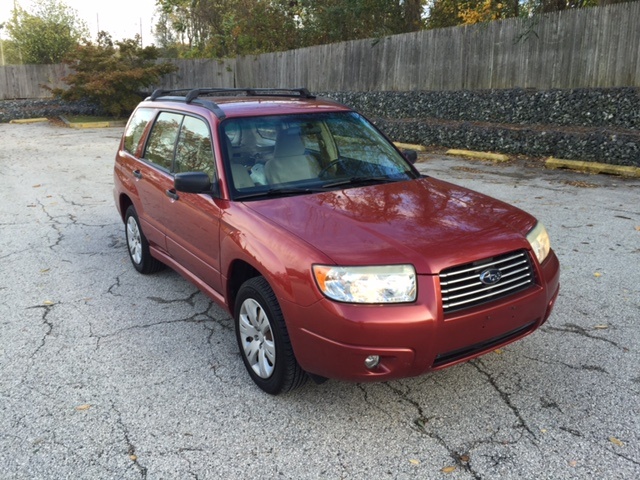 The Forester was slightly updated a couple of model years ago with a facelift and a new rear end, but a meaningful generational change is due out the following year. For now, we get the same boxy-but-beautiful shape we’ve come to love over the years.

As Subaru’s small crossover, the Impreza-based Forester competes in a crowded segment that includes the Honda CR-V and Toyota RAV4, but it’s the AWD Subaru that comes out feeling like the true athlete of the group.

That sporty sensation comes with somewhat unrefined road manners, but the Forester has enough stability where it counts to be comfortable in most circumstances. Where the Subaru comes up a little short against its competition is in fuel economy, where it lands much closer to the SUV side of the spectrum than it does to the car side. That said, new car buyers wanting a more rugged experience will be happy, and won't have to give up everything to get it. 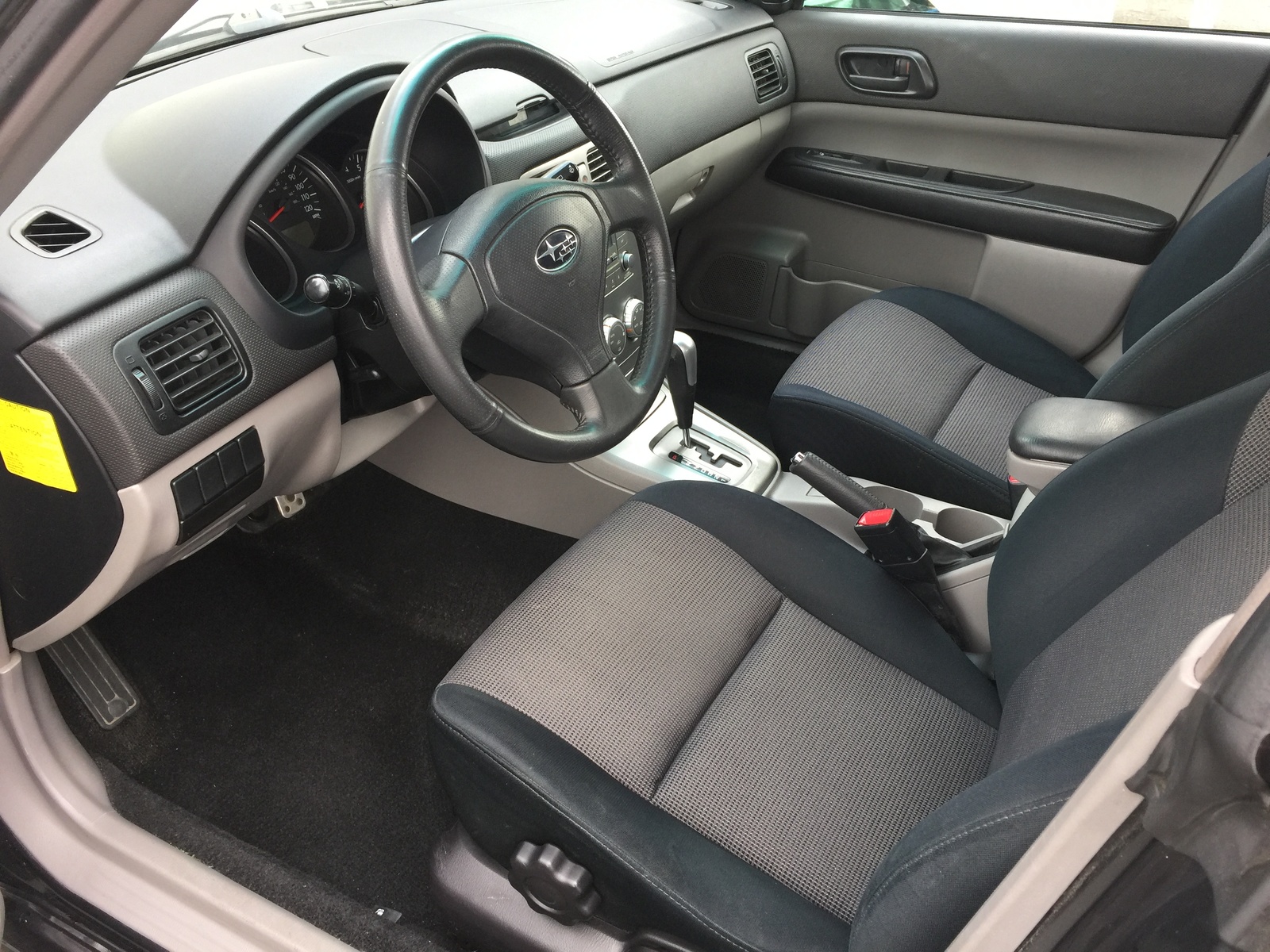 If you are seeking an exciting and beautiful vehicle, look elsewhere. But if you want a form-over-function shape with the absolute maximum usable space, the Forester has you covered. The 2006 update brought a more upscale look to the model, with more chrome, plus body-colored panels, but there’s no getting around the box factor. With slightly flared fenders and a boxy profile, the Subaru has a decidedly more muscular stance than its competition, and the XT trim looks downright aggressive with its hood scoop and rear spoiler.

The Forester’s interior takes much of the same approach to styling, in that there’s plenty of substance but not much style. The dash is clean and uninterrupted by large buttons or displays. The simple three-spoke steering wheel can be had with audio controls in some trims, but even still the overall aesthetic is one of pure utility. 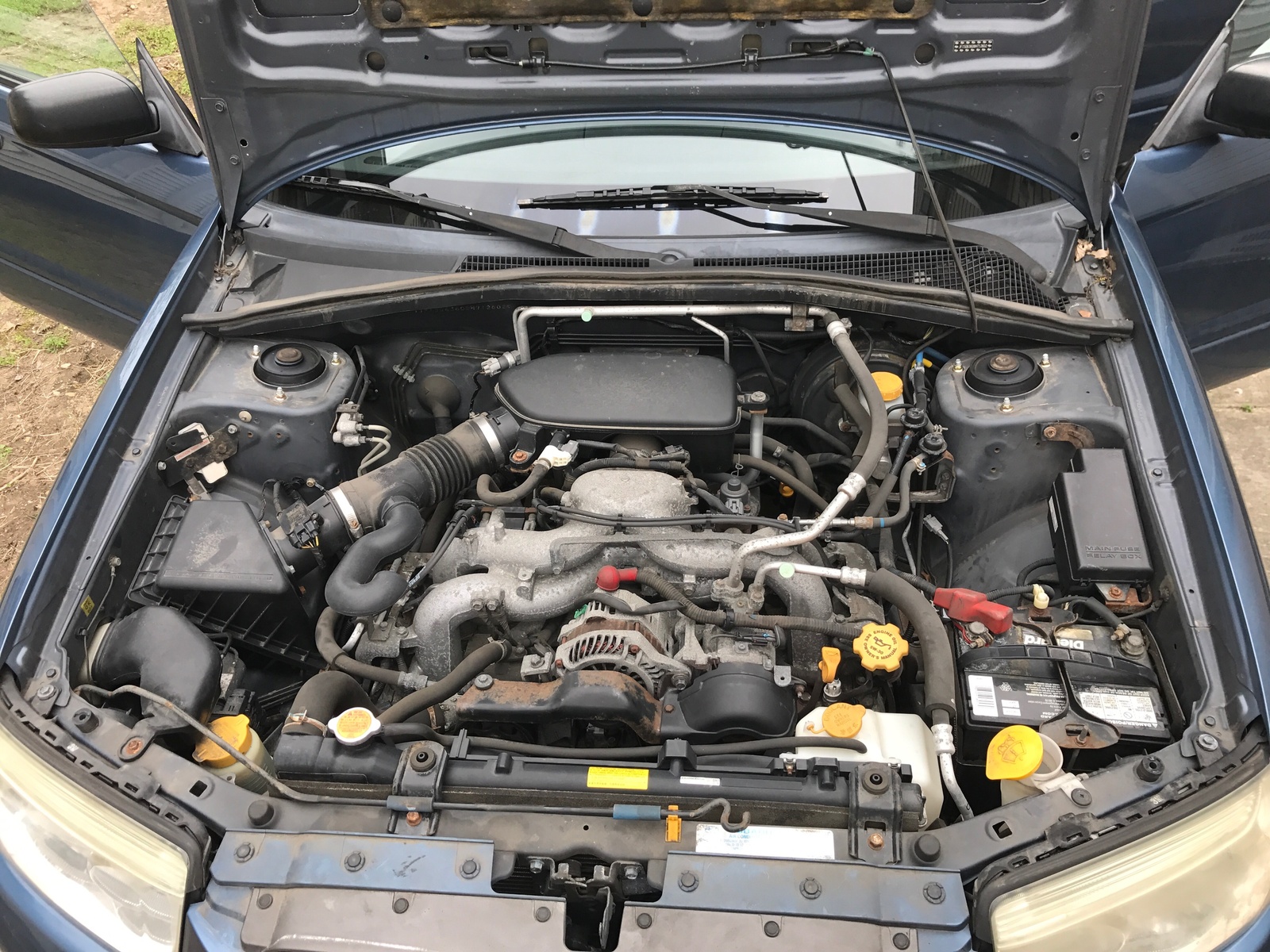 You can have your Forester any way you want it, as long as that way includes all-wheel drive. Beyond that, there are two engine and transmission choices: A 2.5-liter flat-four producing 173 horsepower and a 2.5-liter four-cylinder that produces 224 horsepower.

A five-speed manual transmission is standard, and a four-speed automatic gearbox is optional. The lesser engine does just fine around town, helping the boxy Forester jump into traffic with ease, but it’s on the highway where things start to fall flat. Reaching highway speeds is no problem but passing and accelerating from there can be a mixed back. The flat-four engine lacks the top-end punch that it needs to be a truly competent highway cruiser.

The 224-horsepower engine has a turbocharger that makes its power delivery more dramatic. That gives the Forester an exciting driving dynamic that most of its competition lacks.

Though the Forester rides taller than a normal passenger car, it’s not plagued by the rough rides that many of its SUV brethren suffer. Over some road surfaces, the vehicle can feel unsettled and bumpy, but it never feels out of control. There’s a playful, spunky feeling to the Forester’s performance that larger SUVs can’t match and the fact that there’s a manual transmission on board will make enthusiasts happy.

That somewhat unrefined on-road manner doesn’t translate to all-out off-road performance. Though the Forester’s got the ground clearance to make a serious run through the woods, there’s not enough rigidity and toughness in the suspension and body to make it a hardcore wheeler. That said, the Forester’s got enough ability to take its occupants further than most people will ever want to go in a vehicle. Coupled with a respectable 2,400-pound towing capacity, that capability makes the Forester a great right-sized utility vehicle.

Road and wind noise become a problem at higher speeds, possibly due to the Forester’s large-windowed shape, but almost certainly because there’s a lack of needed sound insulation. Under hard acceleration, both powertrains generate an excessive amount of noise, but the mechanical bits quiet down when cruising. 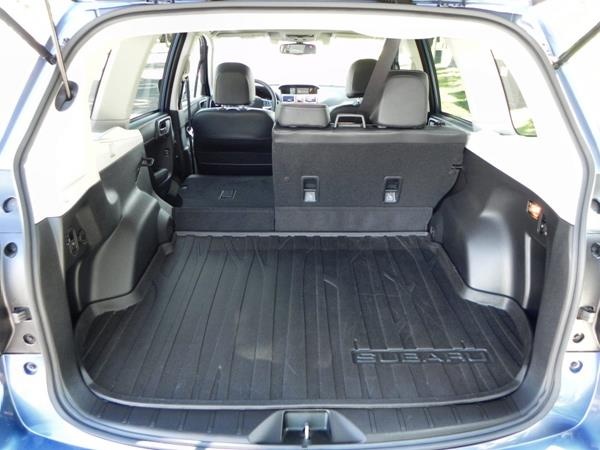 The Forester places usability at the top of its list of priorities, so nearly everything about it is designed with that in mind. The front seats are supportive, but lean to the sporty side, so there may be a heavier bolster than many drivers are accustomed to. Controls and buttons are placed well within reach of both front passengers, and the large windows allow for excellent outward visibility in all directions. In higher trims, leather upholstery gives the Forester a luxurious feel and upscale appearance, but the overall aesthetic is still one of maximum utility. Standard features like air conditioning and power functions help keep this Subaru livable.

Back seat passengers will find slightly less leg room than rivals, due to the Forester’s relatively short wheelbase. But the tall roof at least affords more than enough headroom for nearly any adult. Parents will find difficulty installing larger car seats for the same reason, as there will be competition between front passengers’ leg room and the car seat in back.

At least there’s plenty of cargo space to make up for it. With the rear seat up, the Forester offers 31 cubic feet in the cargo area and almost 70 when it’s down. 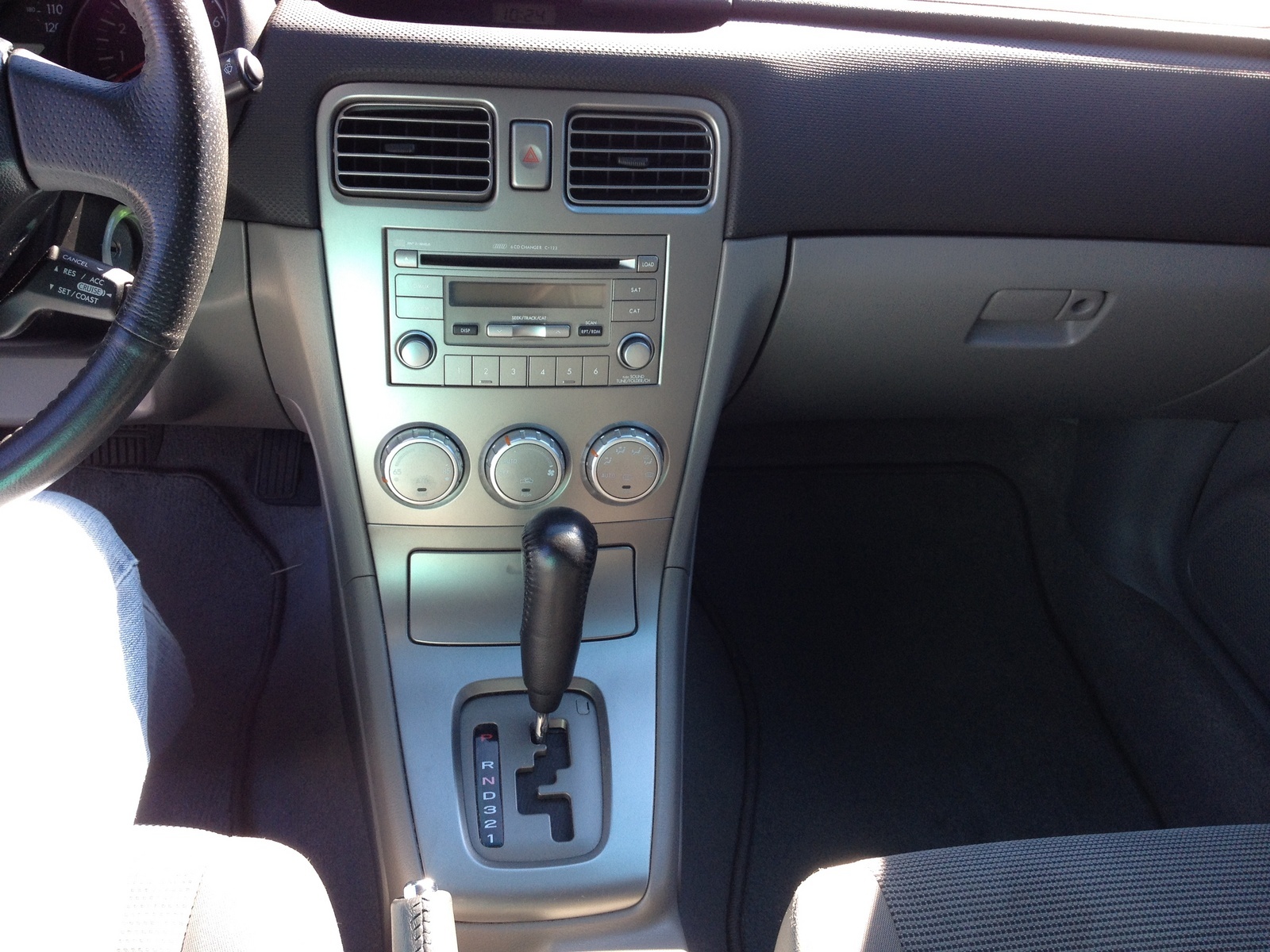 The Forester, in its lower trims, has enough equipment to get the job of driving done, but not much more. There’s a CD player, keyless entry, and power windows/door locks, but buyers will have to step up to the 2.5X Sports trim to get a seven-speaker MP3-capable audio system with an auxiliary input jack. SiriusXM satellite radio and a moonroof/sunroof are available for higher trims, but Bluetooth and navigation aren’t offered at any level. 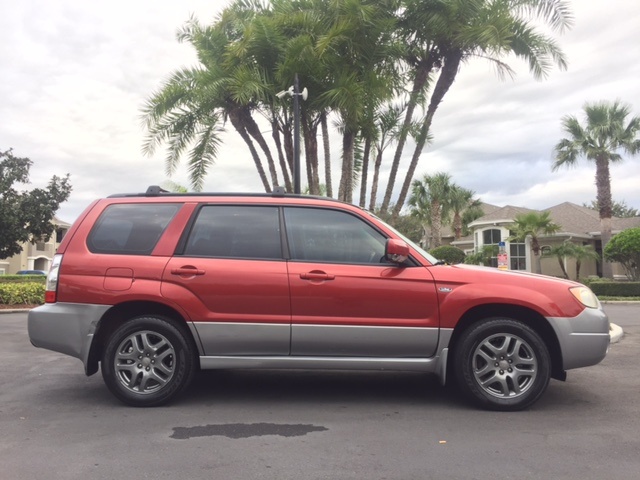 Subaru has long placed safety at the forefront of its vehicle designs, and the Forester is proof of that commitment. The 2008 model was awarded a Top Safety Pick designation from the Insurance Institute for Highway Safety, earning 'Good' marks in all categories from the ratings agency. The National Highway Traffic Safety Administration rated the 2008 Forester five stars in all categories as well. 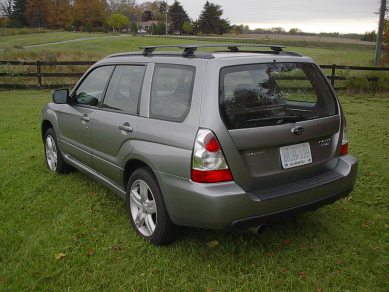 The Forester’s base MSRP of $21,195 is very competitive when the Subaru is stacked up against its closest rivals. Standard all-wheel drive makes it a big value pick in comparison to the Honda CR-V and Toyota RAV4; neither of those have all-wheel drive standard. Adding trim levels and options package took the Forester’s price up to around $29,000 when new, but at the higher levels the Subaru gets lost under more feature-packed offerings from Honda and Toyota.

The more powerful engine puts the Forester well behind the competition in fuel economy, and Subaru’s recommendation for premium fuel brings to the table yet another cost disadvantage.

What's your take on the 2008 Subaru Forester?

Have you driven a 2008 Subaru Forester?
Rank This Car

Guru9SKRWF asked a 2008 Subaru Forester 2.5 XT Limited Car Selling & Trading In question about a week ago

I "MAY" inherited a 2008 Forester. It's in excellent shape and barely used with only around 90,000 miles. What is the ballpark worth?

Any Advice On Replacing A 2008 Subaru Forester Head Gasket Yourself?

I have a 2008 subaru forester with about 170000 miles on it and it is leaking oil and a little bit of coolant. I was wondering if any of you had luck with any brand of head gaskets and whether or no...

What Are The Best Cars On Gas Milage?

HI, I out on about 30,000 a year on my cars... I know.. what is the best cars on gas milage? I was thinking a Subaru but I am still not sure. Any advice would be appreciated

Have a 2008 subaru forester that has a misfire on 2 and 4 any advice? Not sure what type of forester it is cause its a friends