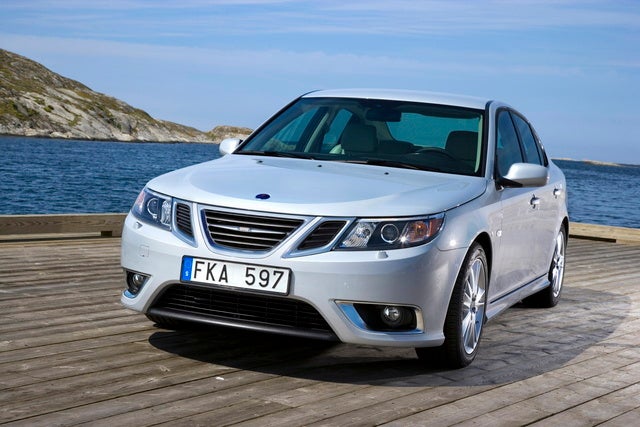 When it came time to update its popular 9-3 sport sedan for 2008, Saab turned not only to its long-standing inspiration, a jet aircraft, but also to a more down-to-earth, though admittedly futuristic source, the Aero X concept car. Even with its aircraft connection, the new 2008 Saab 9-3 doesn't fly, but it can fly down the road, thanks to a more streamlined, aerodynamic appearance and Saab's peppy, turbocharged engines.

Exterior enhancements for 2008 include a deeper, more prominent grille that dips further down into the 9-3's bumper, Nordic iceblock-inspired taillights (which Saab notes are inspired by its Scandinavian heritage), and a sleeker overwrap (raised) hood. Saab has also redesigned the 9-3's front lower fascia as well as the housings for the foglights to give the updated sedan a more aggressive appearance. The result is a sleek, prominent nose that indeed has a jet-like appearance.

Saab also added a number of new standard features to the 9-3 package for 2008, including a tire-pressure monitoring system, rain-sensing windshield wipers, XM satellite radio, a year of OnStar, and 16-inch, 14-spoke alloy wheels.

The 2008 Saab 9-3 is available in 2.0T and Aero trims, as either a sedan or a convertible. The convertible features a simplified drop-top with remote-control opening and express-close windows.

Saab also adds an electronically controlled all-wheel-drive system, called XWD, or cross-wheel drive, which is available as an option on all '08 trims (availability is scheduled for early 2008). Engines include a 207-horsepower, 2.0-liter turbocharged four-cylinder, which powers the 2.0T, and a 252-horsepower, 2.8-liter turbocharged V6 for the Aero trims.

Reviewers have noted that while the new Saab's exterior design tweaks are impressive and the cabin is comfortable (especially the seats), the new 9-3 still lacks in areas such as the suspension, steering, and overall handling, especially when compared to some of the competitive sedans coming out of Germany. However, with the addition of the new XWD system, all those problems go away, and the 9-3 evolves into a road warrior with superb overall handling, according to a number of reviewers and test drivers.

What do it mean when it say key not accpected and the car want start.

152 views with 2 answers (last answer about a year ago)

2008 Saab 93 How To Active Or Use Voice Activated Telephone?

I just bought a 2008 Saab 93 2.0t sedan, the specifications said it has voice activated telephone..how can i use that? The car came with onstar but I don't want to use that, waste of money. Someone ...

I am here from Australia for a few days and wondering if you have an aerial base for my 2008 Linear Saab Convertible 9-3.

I have a 2008 93 2.0t titan grey saab I recently bought. I am looking to purchase a new set of rims for the summer, after market ones. I was thinking black rims? with silver in there. Any suggestion...

I want to know if it has one or the other and when should I change it?