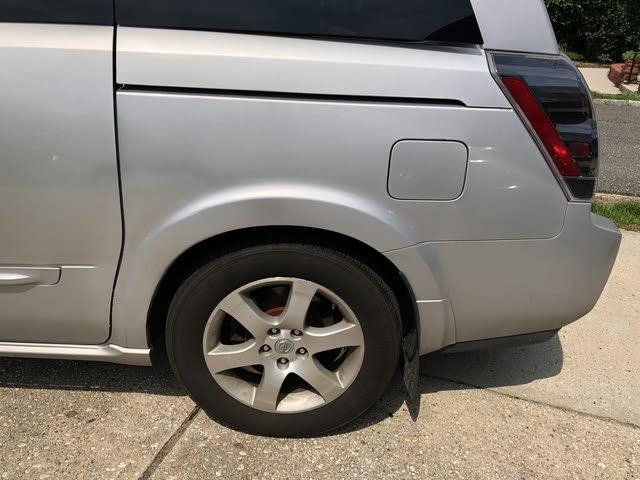 Nissan has unsuccessfully searched for a niche in the minivan market, though its stylish front-wheel-drive entry is definitely roomy. The 2008 Nissan Quest comes in four trims (base, S, SL, and SE) and seats seven passengers in three rows. All trims are powered by a 235-hp, 3.5-liter V6 and 5-speed automatic. After some 2007 tweaks, it receives only a few changes.

Side impact airbags are now standard up front, joining the dual front and curtain airbags for all three rows. These, along with standard traction control, ABS brakes, and 16-inch wheels go a long way to winning five stars across the board in crash tests. The second-row captain's chairs fold, but not flat, while the third row folds into the floor. For 2008, the headrests now automatically fold and a spring assist function eases the overall difficulty. Other additions to the 2008 Quest center on the SL, which gains a rearview camera, dual-zone climate control, and automatic headlights.

All trims feature cruise control, a CD player, full power features, and remote entry. Moving up the line replaces a single manual sliding door with dual power sliding doors and adds a power liftgate. Cargo capacity starts at 32 cubic feet with all seats up, expands to 87 with the third row down, and maxes at 146. With an optional tow package, the 2008 Quest can tow up to 3,500 pounds. There are plenty of cupholders and power outlets for all rows, an overhead console, and a front-row storage console that can be replaced with a folding tray. The requisite DVD player is optional. For greater passenger visibility and to open up the cabin, two rear skylights (the SkyView roof) can be added to a front sunroof.

The 2008 Quest is reliable and comfortable, but doesn't particularly distinguish itself from the rest of the crowd. The engine is smooth, but lacks acceleration power, and there tends to be a lot of wind noise. It is set for an overhaul in 2009.

Users ranked 2008 Nissan Quest against other cars which they drove/owned. Each ranking was based on 9 categories. Here is the summary of top rankings.

Have you driven a 2008 Nissan Quest?
Rank This Car

I have a 2008 Nissan quest, today the Ac in the front stopped blowing but the AC in the rear still works? I checked the fuse but none are blown any suggestions?

The Word SLIP Appears On My Dashboard What Does This Mean?

I have a 2008 Nissan Quest Van and these past couple days while driving and right before I break at a stop light or sign I feel a clunk and the word SLIP/something OFF turns on and then my steering ...

Why Is My Nissan Quest Having Problems Starting

It keeps dying, but only does it a day or 2 after the radio goes out. Everything else connected to or around the radio will work but nothing controlling the radio does anything

My Nissan Quest Van I Am Driving Ok And Suddenly Slip And And Light Turn An...

hi there! i need help ( advise) about my 2008 Nissan Quest SE. i am having problem with the breaks.i had the change and put new wheel bearings hubs and break shoes on both rear wheel.,after job was ...