The Altima Coupe's interior shrinks the Altima Sedan's, meaning four passengers may feel pinched, and the overall driving experience doesn’t quite live up to the expectations set by its lively exterior. 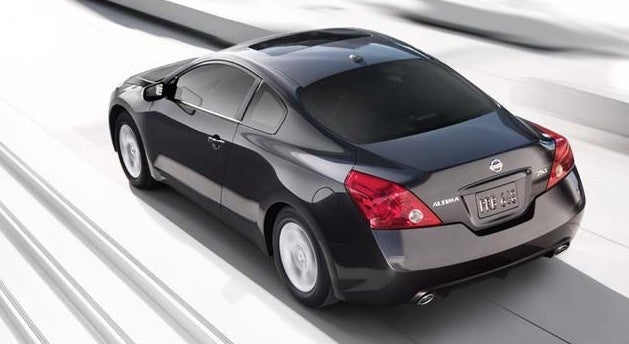 The Altima Coupe exhibits beautiful styling, but needs some touch of the Nissan Z under the hood to help its performance match its street-hot looks. But it comes at a nice price point and offers proven reliability.

In its ongoing effort to keep up with Honda and Toyota, Nissan designed its own midsize two-door coupe for 2008: the Altima Coupe. While its mechanicals are based on the Altima Sedan's, the new Coupe shares only its aluminum hood with the Sedan; all other body panels are unique to the Coupe. In addition, the Coupe has a 4-inch shorter wheelbase, a 2.5-inch lower overall height with a faster windshield rake, and less front- and rear-wheel overhang (its length drops from the Sedan’s 189.8 to 182.5 inches). Many reviewers see a strong family resemblance to the Infiniti G35, and it seems a number of buyers would agree - not able to afford the Infiniti, they opted for the more reasonably priced Altima Coupe.

Two trims are available: The 2.5 S gets power from a four-cylinder, and the 3.5 SE packs a six-cylinder. A number of options packages are available for each, though reviewers find the standard equipment list impressive.

The Altima Coupe is, interestingly enough, aimed at both young and older drivers. Young people, not yet married or married but without children, will find the Coupe a smart, sexy set of wheels comfortable on highway trips and at city entertainment spots. Older couples, primarily “empty nesters” without the kids around and looking for an exciting means of transportation, will also find the Coupe fairly inexpensive and glamorous. Gas mileage is reasonable with both engines, but the 2.5 S trim is the more economical choice. 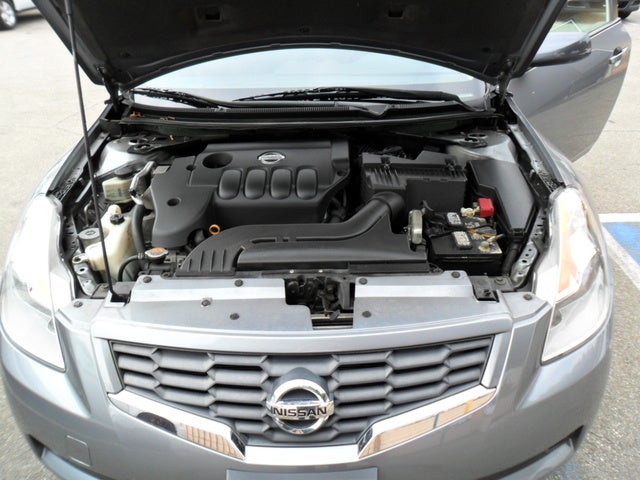 The 2.5 S model is powered by the trusty Nissan Altima Sedan’s DOHC 2.5-liter, 175-hp four-cylinder engine, which puts out 180 ft-lbs of torque. The standard transmission is a six-speed manual. Some find it notchy, but most enjoy rowing through it for a more lively Coupe experience and even claim it's better than the BWM 3 Series' six-speed. The optional Nissan Xtronic continuously variable transmission (CVT), with manual mode, allows for six simulated gears, giving the driver a very responsive six-speed “manual” transmission experience. The majority of reviewers had high praise for Nissan’s CVT, finding it better than a regular automatic transmission. Yet one reviewer felt the CVT seemed to let the engine do more wandering than anything else. The 2.5-liter engine is adequate for everyday highway and city driving, and in these days of high gas prices, its 23/32 mpg (manual) and 23/31 mpg (CVT) EPA estimates provide more reason to favor this power plant.

The other engine provides more motivational sizzle to match the Coupe’s external pizazz. The Gen III VQ35DE, native to the Altima Sedan and better known around the showroom as a 3.5-liter DOHC 24-valve V6, represents Nissan’s world-class, award-winning engine design. It produces 270 hp at 6,000 rpm with 258 lb-ft of torque and can propel the Coupe across the 0-60 jump in 5.8 seconds. The quarter-mile came up in 14.6 seconds at 97 mph, and reviewers comment favorably on the V6’s husky exhaust note. The EPA estimates 19/27 mpg (manual) and 19/26 mpg (CVT).

Overall, reviewers note basic handling differences between the 2.5 S and the 3.5 SE, with the former considered a comfortable city driver and the latter a good highway cruiser. The speed-sensitive variable-assist steering is rated good, if not exciting. The brakes deliver consistent, reliable stops.

Basically, reviewers seem to approach the Coupe at face value and expect its performance to match its sexy, smart, fast appearance. The Nissan Coupe is no G35/37, and at half its price shouldn’t be expected to exhibit that level of performance.

Taken for what it is, the Nissan Coupe is a fun drive and competent daily driver that will certainly turn heads. And that seems to sum it up: The Coupe behaves like a typical front-driver, pushing into oversteer in the corners with its slightly lifeless steering, although Nissan has at least managed to banish torque steer. Overall, due to its shorter wheelbase and slight weight advantage, the Coupe provides more sprightly performance than the more conservative Altima Sedan.

The Altima Coupe has seat belts for five, but comfortably seats four – blame it on the coupe configuration. The front bucket seats are unique to the Coupe, with plush, deeply bolstered thigh supports expressing the car’s performance aspirations and easily accommodating 6-footers. The driver’s seat is manually adjustable for height, and there is a release lever for the passenger seat to more easily accommodate rear-seat entry. But don’t try a 6-footer in back. Due to the Coupe’s low roofline and its overall shorter length, two full-size adults can comfortably inhabit the back seats only for short drives. The bench seats have a 60/40 fold-flat feature that helps to mightily expand the rather modest trunk space. At 7.4 cubic feet, the Nissan Coupe comes in at the low end of the capacity competition, with the Honda Accord Coupe at 12.8 cubic feet and the Toyota Solara Coupe at 13.8 cubic feet.

The rest of the interior is basically from the tried-and-true Altima Sedan. The well-laid-out dashboard is populated with comfortable knobs and switches, all in easy reach. Three circular gauges face the driver: tachometer, speedometer, and gas and engine temperature. LCD readouts for trip and various safety and personal data appear in the bases of those larger gauges.

And then, at the lower-right corner, the big red button. The Coupe comes standard with Nissan’s Intelligent Key system, which is a “smart key” system that allows whoever has the key in their pocket to open the locked car with the push of a button on the door handle and to start and stop it with the press of that big red button. This system is standard on both trims.

Storage spaces are sprinkled throughout the interior: The base of the center stack has a covered storage bin with a power point deep inside, between the shift boot and the bi-level center storage bin are two cupholders, with two more in the rear seat, and there are storage bins in the door panels.

Most reviewers find the cabin fit and finish, as with the exterior, to be exceptionally well done. As for the quality of interior materials, most reviewers were satisfied that they matched this level of automobile; there were only a few minor complaints.

The list of standard equipment is impressive: Along with the Intelligent Key system and full range of power assists, it includes an AM/FM/CD six-speaker sound system, cruise control, dual-zone air conditioning, a safety package that includes six standard airbags, and a six-speed manual transmission.

The 3.5 SE trim adds an eight-way power adjustment to the driver’s seat, along with a power moonroof, cruise and radio controls on the steering wheel, and an express up/down passenger-side window.

Both Coupes have option packages available. The Technology Package includes a DVD-based nav system with voice-recognition, Bluetooth, Sirius or XM Radio, a nine-speaker Bose audio system, High Intensity Discharge (HID) xenon headlights (on the 3.5 SE only), a rear backup camera system, and other items. Premium Packages add heated seats, leather, and incorporate the Technology Package. The 2.5 S also has a Convenience Package which brings it up to full 3.5 SE specs, along with a moonroof and foglamps.

User reviews give the 2008 Altima Coupe top ratings. Overall, owners love its styling, with many referring to its G35 looks, performance, economy, and standard keyless entry feature. As for faults, it’s mostly the small back seat and trunk, and a rear blind spot due to the coupe back. Nissan has lured a number of owners away from Honda, which is Nissan’s toughest competitor in this class.

What's your take on the 2008 Nissan Altima Coupe?

Users ranked 2008 Nissan Altima Coupe against other cars which they drove/owned. Each ranking was based on 9 categories. Here is the summary of top rankings.

Have you driven a 2008 Nissan Altima Coupe?
Rank This Car

Losing Power After An Hour 1/2 - 2 Hrs Or Driving. Whats The Cause?

If I go uphill, say to Vegas from Cali it losese power. I'll go 80 and it will steadily drop to 60. It also has a whirring sound. Nissan dealership says its not my transmission. Co-workers say its my ...

Radio Stays On After Car Is Completely Turned Off.

The car will be completely turned off, but the radio will still be on and playing. I left it alone for a little while thinking it would turn off, like headlights take a few seconds, but never did. I...

Is This Car A Good Buy?

Do I Need To Service The Transmission Regularly

the manual doesn't say anything about servicing the transmission -- but my repair man says it's good "protection"? He'll charge $170 for what he calls "service transaxle"

How Much Horsepower Will A Drop In K&N Filter Give Me?