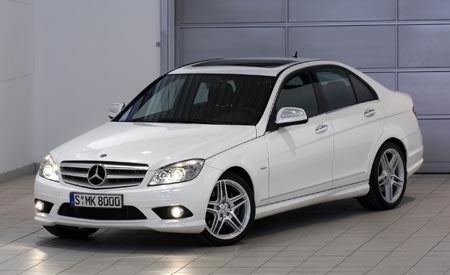 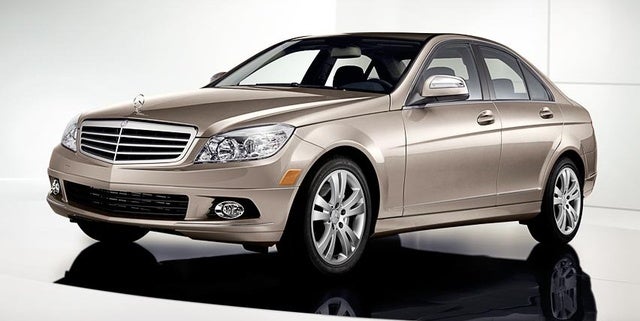 The Mercedes-Benz C-Class cars, first produced in the summer of 1993 as a replacement for the Mercedes-Benz 190 models, are affordable mid-sized vehicles designed to attract new entrants into the luxury automobile market. Now on its fourth generation, which was unveiled in early 2007 in Germany and New York, the C-Class has seen major updates over its history, but began as a four-door sedan with rear-wheel drive and a choice of a 2.2-liter, four-cylinder or a 2.8-liter, six-cylinder engine.

In its early years, the C-Class was often called the Baby Benz, since it was smaller than the mid-range E-Class and upscale S-Class vehicles. But that term has largely gone by the wayside, as with each generation the C-Class line has expanded and grown more powerful. Originally available only as coupes and sedans, C-Class vehicles soon came to include sport coupes, wagons, hatchbacks, and all-wheel-drives, as well as high-performance vehicles with engines and bodywork by AMG, Mercedes' in-house sport tuner. In addition, Mercedes has expanded the line in other directions by introducing new vehicles, such as the CL and CLK cars, which are built on the C-Class platform and incorporate many C-Class components.

The C-Class vehicles are known for their sophisticated lines, smooth ride, comfortable interior suitable for day-long rides, and innovative technology.

The culmination of the line is the 2008 C-Class, which is larger, sportier, safer, and more luxurious and comfortable than its predecessors. The new C-Class is being offered in two models, a Sport Sedan and a Luxury Sedan. To tell the difference between the two, you can just look for the star.

The two new models are distinguished by their front grilles, with the 2008 Sport Sedan getting the Mercedes star positioned centrally in the grille, and the Luxury Sedan receiving the traditional grille treatment, with the Mercedes star mounted on the front of the hood.

The new C-Class models are powered by a variety of V6 engines and come standard with eight-way power front seats, a power sunroof, a new instrument cluster, two-zone automatic climate control, and a 100-watt audio system, as well as 17-inch wheels and such new features as an Agility Control suspension system.

What's your take on the 2008 Mercedes-Benz C-Class?

Have you driven a 2008 Mercedes-Benz C-Class?
Rank This Car

My Car Won't Start, It Says To Remove My Key

I have a 2008 C300 and new battery was placed last year, October. When pu the key in it tells me to remove my key and nothing else. Completely dead. Ordered a new key and it arrived this morning and ...

Is Buying A Mercedes Benz Over 100k A Good Buy?

this car would have to be a trade in.

Why My Car Won't Start But It Cranks

Why my car won't start but it turns over