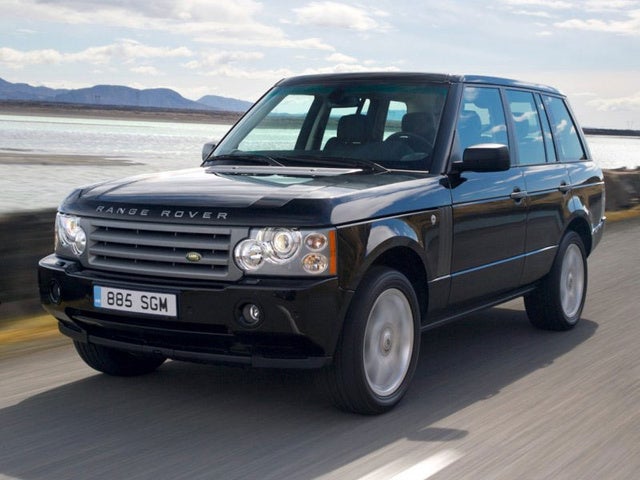 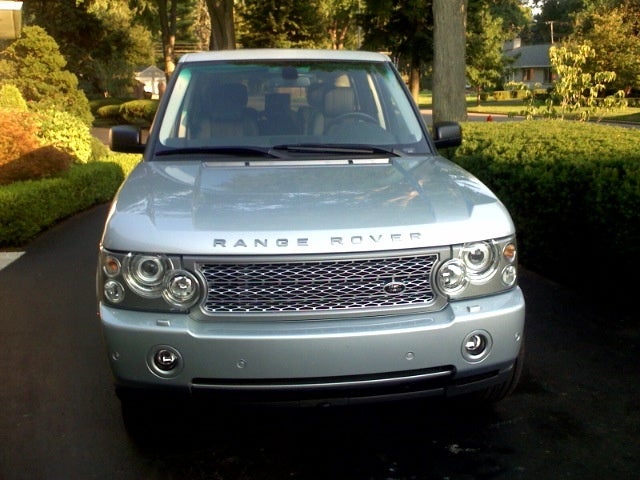 The Range Rover HSE is powered by a Jaguar-sourced 4.4-liter V8 that produces 305 hp in a cleaner and more efficient manner than the BMW engine it replaces. The HSE is capable of making the 0-60 leap in just over 9 seconds according to CarsDirect, although Land Rover says 8.3 seconds. Consumer Guide averaged 12.3 to 14.1 mpg in city/highway driving, while the EPA rating is 14/18 mpg city/highway. Top speed is electronically limited to 124 mph.

The Range Rover Supercharged is based on another Jaguar-sourced engine, a 4.2-liter supercharged V8 that produces 400 hp. It drives the Range Rover across the 0-60 leap in 7.1 seconds, according to Land Rover. The EPA gives it a 13/18 mpg rating, while CarsDirect saw 16 - 17 mpg in their driving, and Consumer Guide got 12 mpg with more city than highway use. Top speed is electronically governed to 130 mph. Reviewers found the supercharged version noticeably quicker off the line and in mid-range passing maneuvers.

Both engines are mated to the latest-generation ZF six-speed automatic transmission, which features CommandShift. With the Range Rover, CommandShift works in the high and low ranges of the transfer case for use in on- or off-road environments. In manual mode, it will hold shifts to the engine redline and even delay shifts to the engine's stall point, providing low, borderline-lugging engine speed for off-road applications. In sport mode, upshifts and downshifts are perceptibly faster. One reviewer reports that the transmission will even drop down a gear in a corner to gain advantage in the engine's torque curve.

In 2007, the HSE trim got the same suspension as the Supercharged version, which meant a 30% stiffer front end and 100% stiffer rear end. That added stiffness resulted in a 15% reduction in body roll for the HSE. According to the CarsDirect reviewer, its ride remains smooth and quiet on the highway.

The key to Range Rover's smooth highway manners and off-road prowess is its sophisticated, interconnected air suspension, which allows for softer spring rates and a 2-inch range for its adjustable ride height. That height can even be pre-set, so the vehicle will achieve a lowered height as it rolls to a stop, allowing passengers to exit with minimal wait time.

The Range Rover features a long list of electronic technology that elevates it to the top of its class in handling both on-road and off-road terrain. Beginning with Terrain Response, the SUV offers five separate settings for various types of driving conditions: general pavement driving, grass/gravel/snow, sand, mud and ruts, and rock crawling. This system preloads the differentials - a locking center differential is standard, with a locking rear differential optional on the HSE and standard on the Supercharged - to enhance traction for specific terrain. The Range Rover can even low-range crawl at 2.4 mph at 1,000 rpm - an industry low-speed low.

In addition, the Range Rover includes Dynamic Stability Control as standard equipment. Working in conjunction with the antilock brake system, yaw-rate sensors, and the traction control system, this system will correct in oversteer situations.

Hill Descent Control does an amazing job, according to reviewers, controlling the Range Rover downhill, especially in off-road conditions. It balances engine braking and regular-brake application to get you down the steepest inclines. One reviewer claims the seat belt was the only thing preventing him from falling onto the dashboard, and his feet were not even touching the brake or accelerator.

The transfer case can be switched on the fly between low and high range. A dual-stage throttle offers on- and off-road calibrations, and Range Rovers feature a plastic and Kevlar undercarriage protection system and off-road traction control that limits trail damage. In addition, the instrument panel shows a diagram of the front wheel position, which is useful when you're up to your axles in mud. And in off-road mode, the navigation system will display elevation contours and even track where you've been to help guide you home. Is there any doubt of the Range Rover's legendary off-road prowess?

Drivers can enjoy the Range Rover's driving talents while luxuriating in a spacious cabin wrapped in the finest leather and wood appointments. According to reviewers, the cabins of expensive racing yachts inspired the Range Rover's interior. Having undergone an extensive remake in 2007, the dash, center console, seats, and interior door panels are all new. Keeping the outside out, triple-laminated window glass and a revised (quieter and more efficient) ventilation system were added, as was new safety equipment. Side airbags were relocated from side to seatbacks to better deploy regardless of seat position. A driver knee-protection bag was added, and front passenger frontal bags were redesigned to deploy in a less injury-causing manner. Switches were redesigned to be more intuitive, with improved ergonomics. All reviewers gave the Range Rover's interior very high marks for quality and comfort.

The 2008 Land Rover Range Rover is a land yacht, in the most positive sense: It can sail over any terrain while keeping its driver and passengers in quiet, luxurious comfort.

What's your take on the 2008 Land Rover Range Rover?

Users ranked 2008 Land Rover Range Rover against other cars which they drove/owned. Each ranking was based on 9 categories. Here is the summary of top rankings.

Have you driven a 2008 Land Rover Range Rover?
Rank This Car

Suspension In Front Goes Down

i have a 2008 supercharged rangerover it was excellent but all of a sudden it just lowered itself for some reason i guess its the hydraulic system. Took it to a mechanic and under the spare tire th...

Well maintained, owned by family member who is getting a new one. Just want to drive it for two years for fun then resell for close to what I paid and get a vehicle with third row seats for kids. Ch...

I Have A 2008 Rangerover HSE W/ Warning " SUSPENSION WILL LIFT WHEN SYSTEM ...

I have a 2008 Rangerover HSE w/ warning " SUSPENSION WILL LIFT WHEN SYSTEM IS COOLED" Is that a bad compressor or a bad controller or a bad sensor, the rear passenger tire shows orange square at the...

my 2008 westminster is missing the bafffle plate on top of engine. i it necessary or cosmetic?