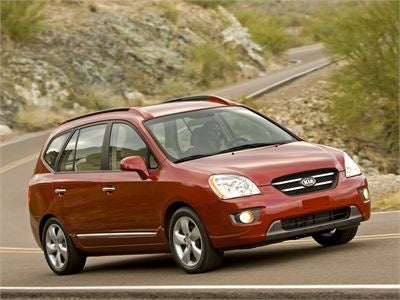 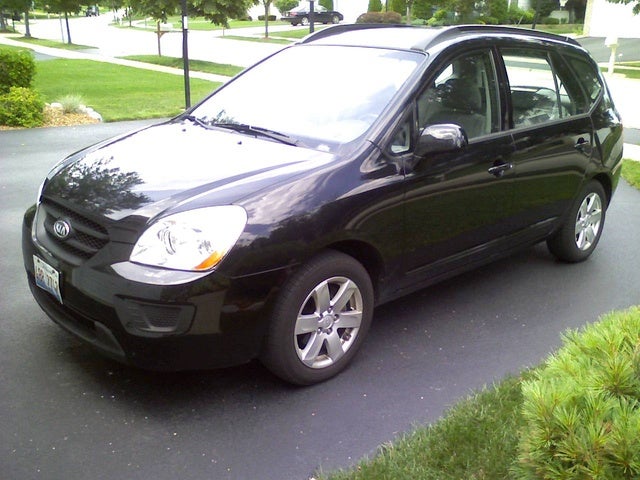 Except for the addition of a standard MP3 audio input jack and the deletion of a cassette player, the 2008 Kia Rondo remains unchanged in its second year on the market. This font-wheel drive crossover competes directly with the Mazda5, though critics say it doesn't match that car's style or performance. What it does offer is a spacious interior and versatile cargo and passenger configurations.

The 2008 Rondo comes standard with two rows, with the option to add a third row. While the second row offers more than 38 inches of legroom and slides forward and back, the third row is more suited for kids. Both rows fold flat and split-fold, and the front passenger seat also folds flat for up to eight feet of storage space. Two-row vehicles also feature under-floor storage compartments. A standard roof rack provides more space.

Both LX and EX trims come with a choice of a 162-hp, 2.4-liter I4 and 4-speed automatic or a 182-hp, 2.7-liter V6 and 5-speed automatic. Both transmissions feature Sportmatic shifting. The LX starts drivers off with 16-inch wheels, full power features, front and rear power outlets, and a CD player. The EX adds some flashier touches, such as chrome exterior accents, a leather wheel and shifter, 17-inch wheels, remote entry, and a CD player that's MP3-compatible. The 2008 Rondo earns four and five stars in crash tests, thanks to standard ABS brakes, stability control, dual font-side and side curtain airbags for both rows, and a tire monitor. It also comes with Kia's 10-year/100,000-mile warranty.

The crossover wagon gets praised for its easy car-like handling, quiet ride, and roomy comfort, and its high safety record scores points with the families it's targeted at. Negatives include its undistinctive looks, minivan styling, cramped third row, and lack of a manual transmission. Some find the lack of sliding side doors hinders access to the third row.

Norma I've only had mine for 2 days but so far so good. I got the 2.7 v6 and the power is all there. It's very comfortable, roomy, and the large windows give you a great view of your surroundings.( no blind spots) I'm used to driving a pick up so it's nice to have a car that can still haul a load and extra passengers. I'm happy.

Have you driven a 2008 Kia Rondo?
Rank This Car

no matter what position they are in the interior lights go on and off with the headlights.

how do i set door locks to automatically lock when car starts?

Misfire On 2 And 4 Cylinders

how can i find out if the coil is dead.i have misfire on cylinder 2 and 6

I have a missfire on #4 cylinder, which bank is #1 cylinder and how does the cylinder order go?

Just recently I had a person tell me my left tail light was out but that my brake lights and turn signals worked. Replaced the bulbs and nothing, check the fuse (10A) in the interior panel and it was ...

234 views with 3 answers (last answer about a year ago)