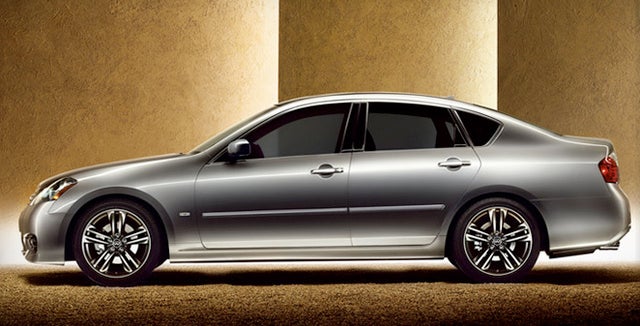 Taking cues from Target, the 2008 Kia Optima offers luxury car features similar to higher-name brands, but at a lower price, stronger warranty, and an every-growing reputation for reliability. Recently overhauled in 2007, the 2008 Optima gets minor changes. These include black mirror housings, the final goodbye for the cassette player, and the addition of an audio input jack.

The front-wheel drive mid-sized sedan comes in LX or EX. Both trims are offered with either a 162-hp, 2.4-liter I4 or a 185-hp, 2.7-liter V6. A 5-speed manual is standard on the LX I4, but the other trims come with a 5-speed shiftable automatic. The LX is equipped with full power features, CD/MP3 player, and tilt and telescopic steering, and the automatic version also features cruise control and wheel-mounted controls. The higher-end EX adds a power driver's seat, 6-CD player, foglights, chrome accents, dual exhaust, and leather trim. Unlike higher-priced luxury cars, leather seats are optional, along with a power passenger seat, and sunroof. These options are only offered on the EX.

Six airbags (front, side curtain and side impact for both rows) are standard, earning the 2008 Optima five stars in crash tests. However, one major drawback is the lack of standard ABS brakes or traction and stability control. These cost extra and jack up the price significantly. The Optima is surprisingly roomy inside, with a large 15 cubic foot trunk. Rear seats split-fold and there is also a trunk pass-through. Highlights of ownership include the 10-year, 100,000-mile warranty, roomy and comfortable interior, long list of standard features for a low price, and the small turning radius that helps in city driving. Complaints mention an I4 engine that struggles to accelerate, a not-so-refined V6, lack of seat support, and the lack of standard safety features.

Users ranked 2008 Kia Optima against other cars which they drove/owned. Each ranking was based on 9 categories. Here is the summary of top rankings.

Have you driven a 2008 Kia Optima?
Rank This Car

my kia optima key wont turn in the ignition. i tried jiggling the steering wheel. it moves fine but the key didn't turn. i tried to spray wd40 in the ingnition, that didn't work. i read to disconn...

How Can I Replay To A Message On CarGurus?

Someone sent me a question but I don’t know how to respond to his question. I got an email from noreplay@cargurus so I can’t replay to this email and here on the app doesn’t show how to reply.