The 2008 Jeep Wrangler is more comfortable and capable than ever before, but is still a compromised daily driver. 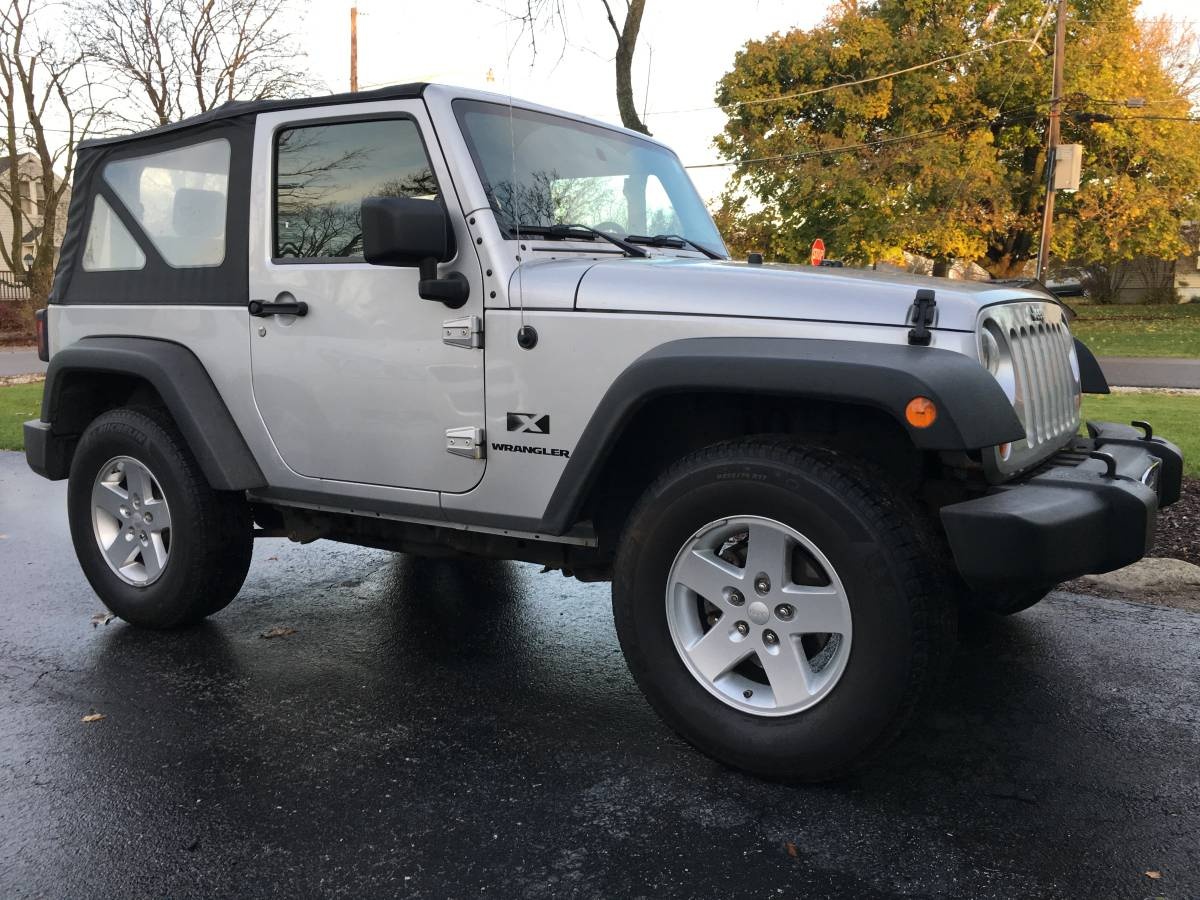 The Jeep Wrangler is a unique beast in the automotive world It’s not quite a “normal” SUV and is instead focused on all-out off-road capability over almost everything else. It was redesigned for the 2008 model year with a new four-door model, a new engine, and a host of new tech features.

The Wrangler is targeted at new-car buyers that want the ultimate in off-road capability while retaining some degree of on-road manners. Without a Ford Bronco or Chevrolet Blazer on the market, the Wrangler is left without any direct competition. Instead, buyers may cross-shop vehicles like the Toyota 4Runner, Hummer H3, Nissan Xterra, Toyota FJ Cruiser, and even trucks like the Toyota Tacoma.

The 2008 Wrangler is offered in three trim levels: X, Sahara, and Rubicon. All trims are available in the new Jeep Wrangler Unlimited four-door configuration, and Jeep offers right-hand drive models as well (aimed at mail carriers). All Wrangler models use a 3.8-liter V6 engine for the 2008 model year. It produces 202 horsepower in two-door models and 205 horsepower in Unlimited models. A six-speed manual gearbox is standard, while a four-speed automatic is also available. 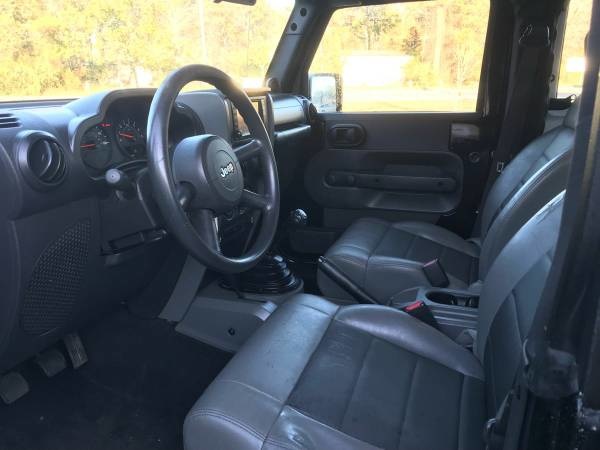 The Jeep Wrangler is one of those things in life that never really changes. Despite having been redesigned for the 2008 model year, and despite the fact that it’s now offered with two extra doors, there’s no mistaking that you’re looking at a Jeep when one rolls past. The new model retains its round headlights, signature grille slats, and a boxy shape that is unmistakable to even casual Jeep fans.

Inside, there’s now more room than ever before and the new layout is intuitive and well thought-out. It’s still the upright, boxy affair that everyone expects from a Jeep, but the extra space and clean layout helps make the Wrangler a nicer place to spend time on or off the road.

True to form, the Jeep can be outfitted as a real-deal off-roader in some configurations. The Wrangler Rubicon has neat kit such as skid plates and the manual transmission's low gearing is great for rock crawling or getting out of tight situations. 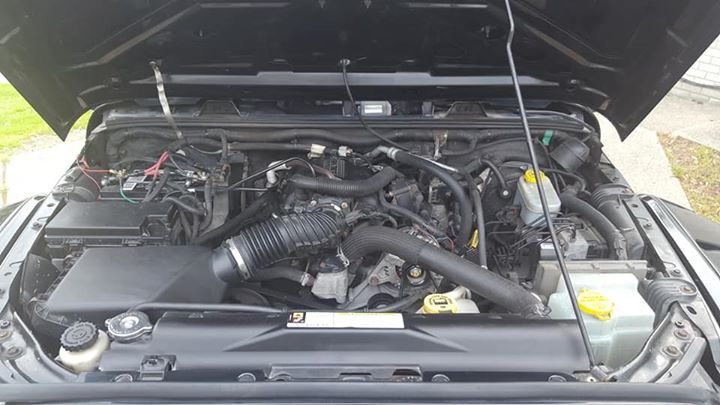 Making a judgment on the Wrangler’s driving dynamics is an exercise in properly aligning expectations. Getting behind the wheel expecting a Cadillac-like experience will cause disappointment. The Jeep is rough around the edges because it has to be, but it’s worth noting that the 2008 Wrangler is worlds away from the rough-riding vehicles of years past.

On the road, the Wrangler is busy and, unlike many cars today, actually requires the driver’s input to stay in line. On the highway, the Jeep is surprisingly docile, holding its own at freeway speeds. Broken pavement does cause more movement than in other vehicles, but it’s a small price to pay for the off-road capabilities the Wrangler has.

The 3.8-liter V6 does its job without complaint and can power the Wrangler up and over obstacles with relative ease. The automatic transmission finds the right gear and tends to hold it, which reduces the restlessness that can be felt from so many other four-speed gearboxes. The 6-speed manual transmission wakes the Wrangler up and makes off-roading a hoot. Low-range, special differentials, and a transfer case will take the Wrangler through nearly anything, and it’ll come out the other side with a smile on its face. Two-door models are better suited for hardcore rock crawling, because of their shorter wheelbase, but the Jeep Wrangler Rubicon is hardcore enough to be capable in any configuration. 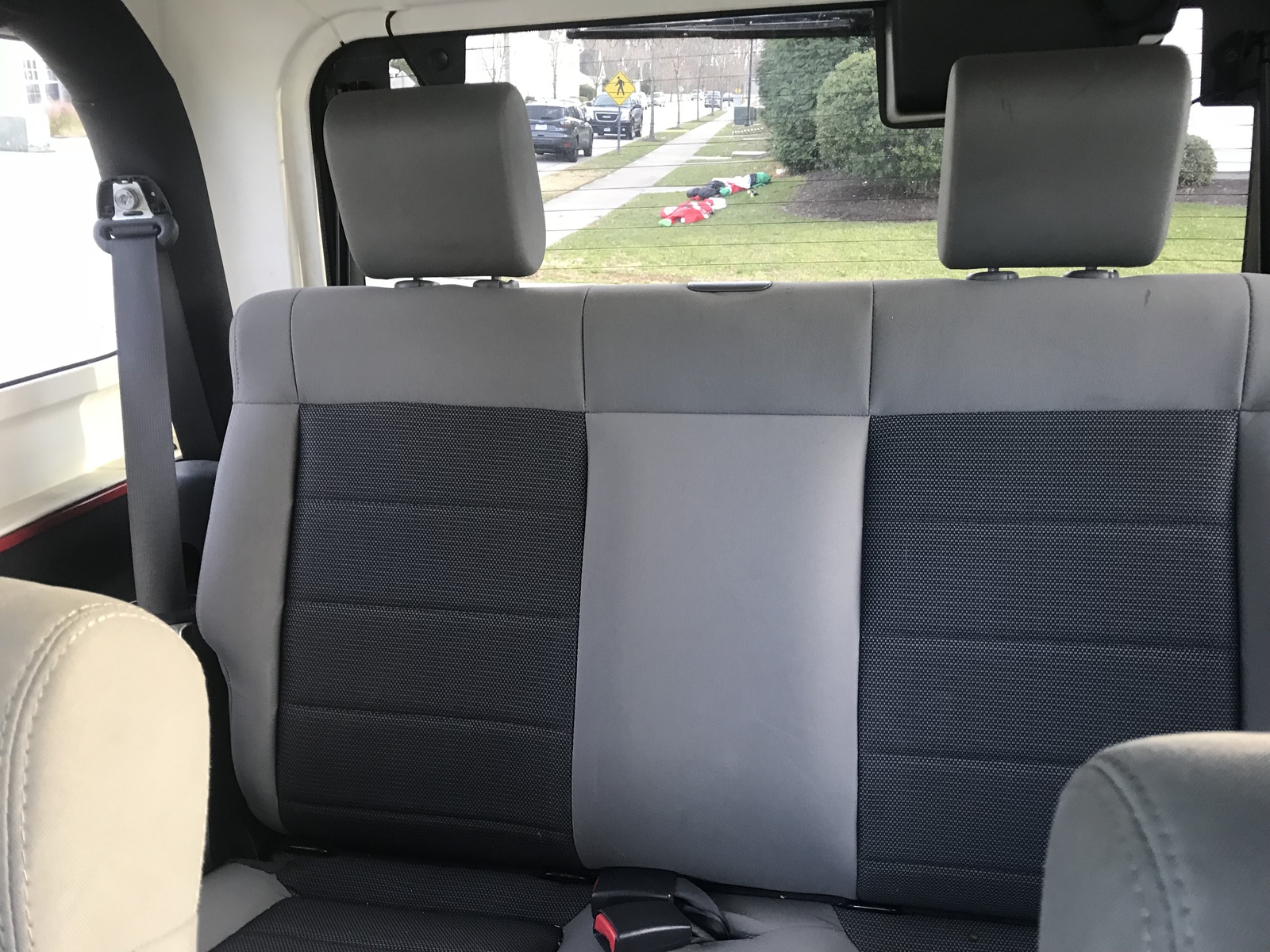 Depending on how it’s used, the Wrangler can be the perfect vehicle. Inside, it has over five inches more shoulder room and almost five inches more hip room for people in the front seats, compared to the previous-generation model. Jeep also bumped up the cargo area by two inches, and the four-door Unlimited model can house up to 86 cubic feet of cargo behind the back seat. That’s more than most of the Jeep’s competition and plenty to carry a family deep into the woods for an off-the-grid adventure.

Unlimited models are also decent as kid carriers. The upright design and square doors facilitate easy loading, although the Jeep’s ride height and ground clearance may make it hard for shorter parents to lift kids up into the cabin.

The Wrangler’s unique top provides a few different options for open-air driving. The modular top available for Unlimited models has individual sections above each passenger that can be lifted off easily after flipping the fastener, while the larger back half of the roof can be removed as a whole. It’s worth mentioning that the larger part of the top cannot be stored inside the vehicle. Soft top or hard top, the Wrangler's open-air experience is unrivaled. Who needs air conditioning? 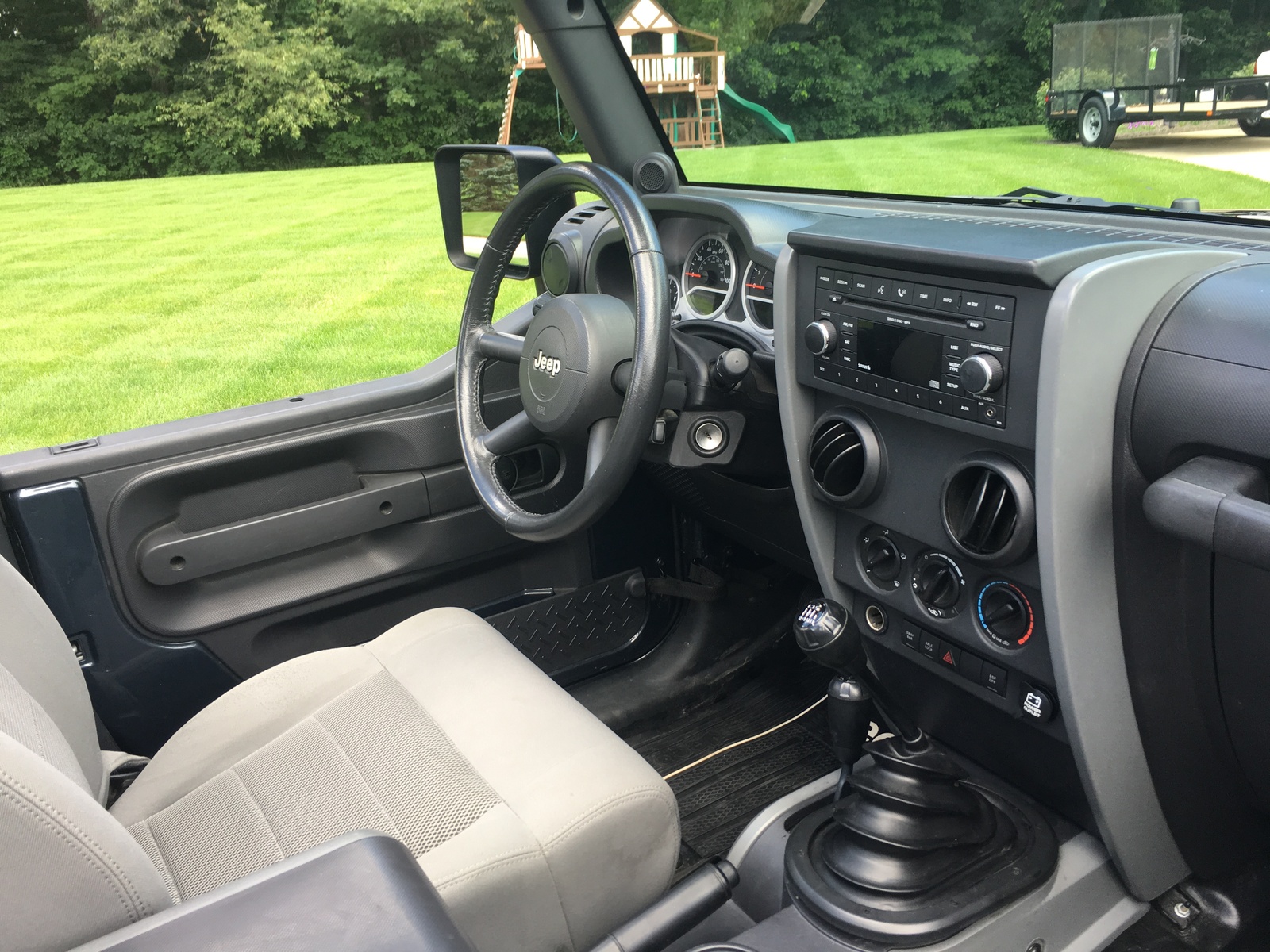 Technology offerings range from basic to less basic. The Wrangler X come with a 12-volt auxiliary outlet, six speakers, and an AM/FM/CD stereo. Available features include a compass, outside thermometer, a six-disc CD changer, SiriusXM satellite radio, and an Infinity sound system with six speakers and subwoofer. The Jeep/Chrysler MyGig system is easy to use and colorful, and can be optioned up with a navigation system.

Power equipment is limited at the base level as well. Features like power windows and door locks, cruise control, keyless entry, and steering wheel-mounted controls sidestep the entry level trim. 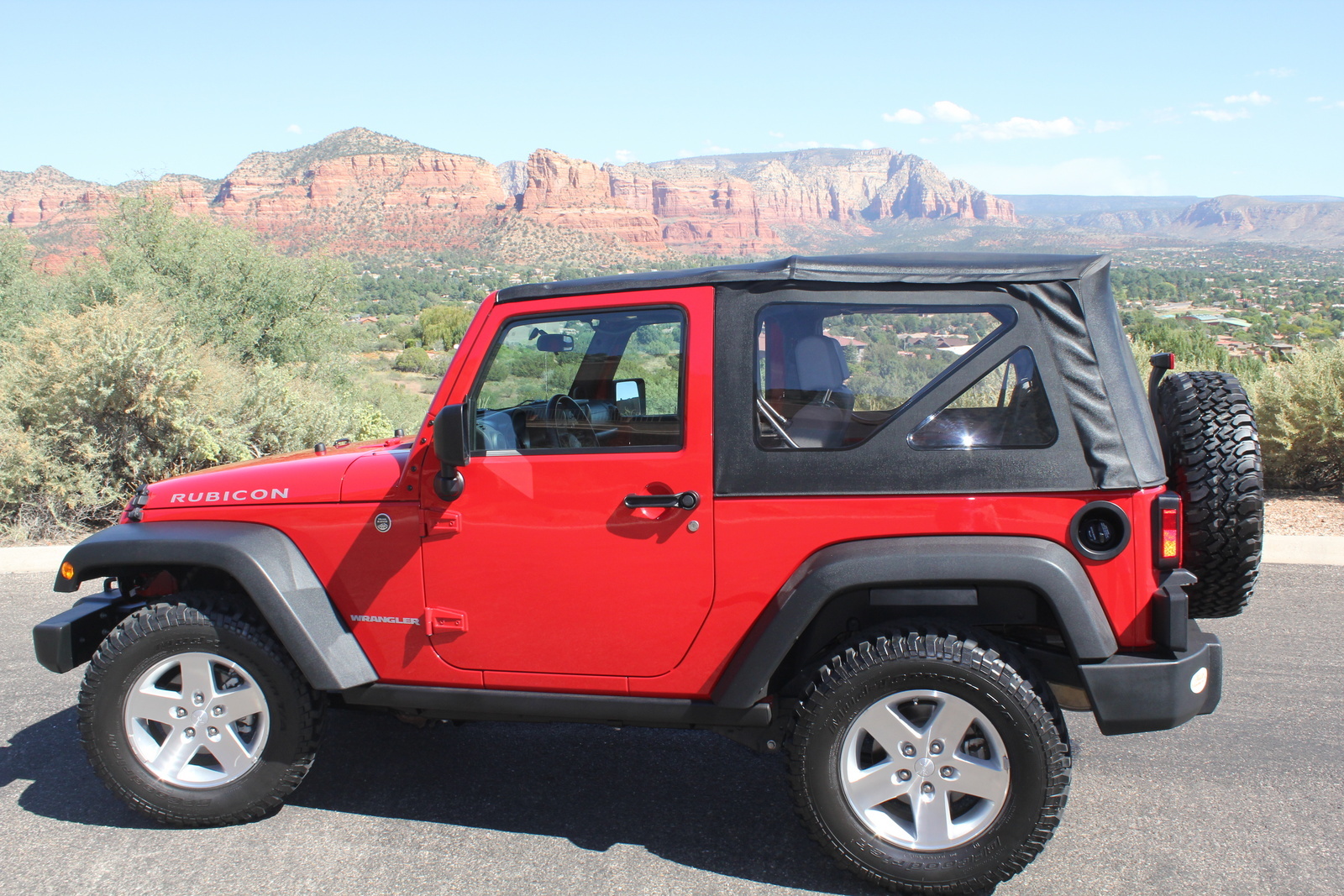 All of that open-air freedom comes at the expense of top safety scores. The Insurance Institute for Highway Safety (IIHS) gave the Wrangler top "good" ratings in small and moderate-overlap front driver-side crash tests, but only "marginal" ratings in side crash tests, and for head restraints and seats. The National Highway Traffic Safety Administration (NHTSA) hasn't published safety ratings for the Jeep. 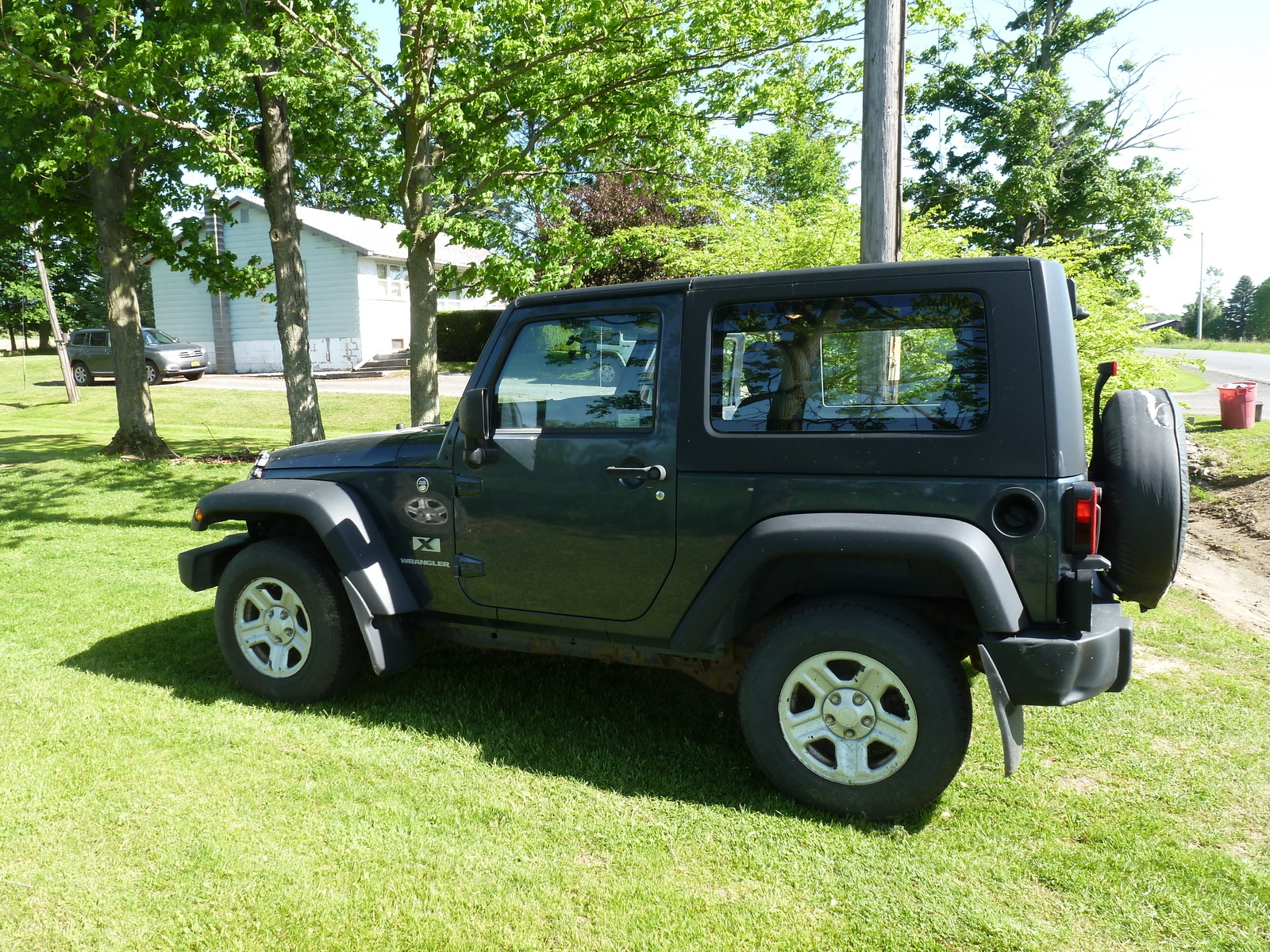 Like it or not, the Jeep Wrangler is the best at what it does, and as a result it's able to bypass many of the standard measures of value that buyers assign to vehicles. The Jeep Wrangler X has a starting price of $18,660, which buys a basic vehicle with no bells or whistles and very little in the way of comfort equipment. Loaded up, Wrangler Unlimited Rubicon models land just shy of $30,000.

Competitors cost more, but they offer more as well. The Toyota FJ Cruiser, for example starts at around $4,000 more than the Wrangler, but offers more standard features and more advanced tech.

If we were shopping for a Wrangler today, we'd opt for the Jeep Wrangler Sahara Unlimited. The Sahara trim grabs goodies that the Wrangler Unlimited X does not, and the price remains reasonable. Of course, purists will argue for a two-door Wrangler, but the extra doors and cargo space makes the Wrangler Unlimited a much better daily driver.

Users ranked 2008 Jeep Wrangler against other cars which they drove/owned. Each ranking was based on 9 categories. Here is the summary of top rankings.

Have you driven a 2008 Jeep Wrangler?
Rank This Car

Do You Have 1st Time Buyers Loans