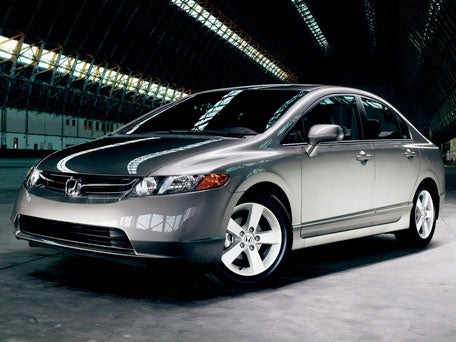 Honda adds three new trims to the Civic lineup for 2008, including a luxury-oriented EX-L trim, but retains all the elements that have made the Civic one of the best-reviewed compact cars available today, including solid performance, nimble handling, good fuel economy, and a comfortable interior.

Some drivers find fault with the Civic's relatively simple interior, and others would like to see better brakes, performance, and speakers for the sound system, but overall most drivers have very few negative comments about the Civic. 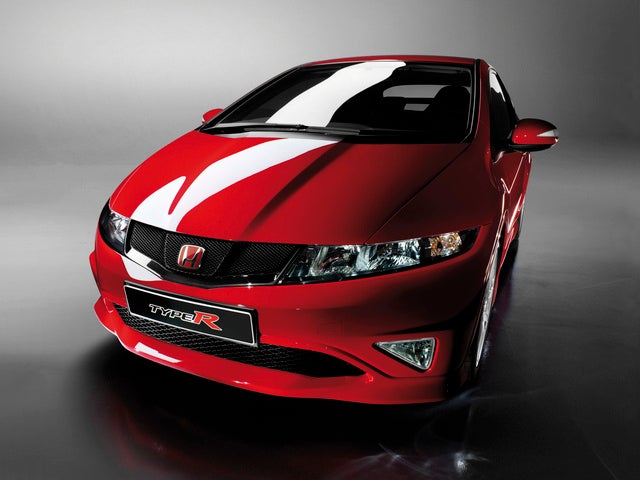 The 2008 Civic continues its long tradition of delivering exactly what drivers have come to expect - reliable, economical transportation that looks good on the outside, keeps occupants safe and comfortable on the inside, and holds its value well.

Honda expands the Civic lineup for 2008, adding three new trims, including the natural-gas-powered GX, the sporty Si Mugen, and the upscale EX-L, which features leather-trimmed seats, heated in front. But perhaps most importantly, the '08 Civic retains the efficient, economic design and quality components that have made it one of the world's most popular and successful compact cars. Although its last redesign occurred in 2006, the Civic's aerodynamic shape still looks contemporary, although slightly dated (especially the front fascia and headlights), and the cabin lacks some of the versatility of the Honda Fit, according to reviewers. Nonetheless, the Civic stands out from the crowd due to its performance, comfort, fuel economy, and safety features, as well as the fact that it holds its value well.

For 2008, the four-door, front-wheel-drive Civic sedan comes in three basic trims: the entry-level DX, the mid-level LX, and the top-of-the-line EX/EX-L. In addition, Honda offers the Civic in a Hybrid version, as well as the sport-oriented Si trim.

All Civics (including the Hybrid) are powered by four-cylinder engines. The Civic does not offer a V6 option, as does its bigger sibling, the Accord. However, Honda does offer such upscale options as a satellite-linked Navigation System with voice recognition, available in the EX and EX-L trims.

The Civic has established a reputation for its economy, and that holds true for the 2008 version. EPA mileage estimates of up to 36 mpg for the gas-powered trims and up to 45 mpg for the Hybrid should appeal to drivers who want to stretch their energy budgets. And with a wide range of trims, the Civic offers something for just about any economy-minded driver. 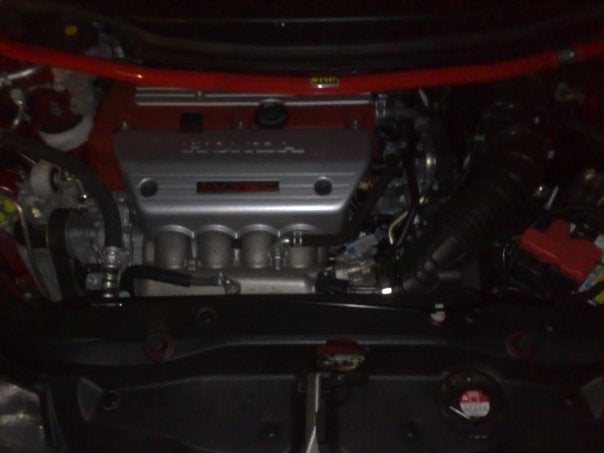 A 1.8-liter, 140-hp i-VTEC four-cylinder engine provides the power for the DX, LX, and EX trims. The engine links to a five-speed manual transmission or an available five-speed automatic. Standard engine features include multi-point fuel injection, a Direct Ignition system, and a Drive-by-Wire throttle system, which operates electronically using a sensor, rather than mechanically. EPA mileage estimates for the standard four-cylinder engine range from 26/34 mpg with the five-speed manual transmission to 25/36 with the optional automatic. The engine runs on regular unleaded fuel.

EPA mileage numbers jump quite a bit for the Civic Hybrid, clocking in at 40/45 mpg, although some drivers note they don't achieve those mileage numbers. The Hybrid's powerplant combines a 20-hp electric motor with a 110-hp, 1.3-liter inline-four engine. A CVT (continuously variable transmission), offered only in the Civic Hybrid, has been designed for smooth shifting. To conserve fuel, a stop/start feature shuts down the Hybrid's engine when the vehicle stops in traffic, and a similar fuel cut-off feature saves gas when the Hybrid decelerates. Regenerative braking recharges the Hybrid's battery.

The Civic GX, new for 2008, runs on compressed natural grass for clean near-zero-emissions operation. The GX's 1.8-liter i-VTEC four-cylinder engine delivers just 113 hp, but manages a respectable 24/36 mpg city/highway. To ensure smooth operation, the GX's powerplant incorporates a number of unique features, including special engine mounts and a newly designed crankshaft. The Drive-by-Wire throttle system also comes standard. The engine links to a five-speed automatic transmission, which is the only transmission available for this trim. The EPA has designated the Civic GX the world's cleanest internal-combustion vehicle. Honda currently offers the GX for limited sale in California and New York.

Honda pumps up the power of its four-cylinder engine for the Si and new Si Mugen trims, which receive a 2.0-liter, dual-overhead-cam K20Z3 powerplant that produces 197 horsepower and 139 ft-lbs of torque at 6,100 RPM. Features such as variable valve timing, a cold-air intake, and a high-flow, low-heat exhaust manifold result in a quieter exhaust note at cruising speeds but a full, throaty sound under aggressive acceleration. The engine links to a close-ratio six-speed manual transmission, which is the only transmission available on the Si. 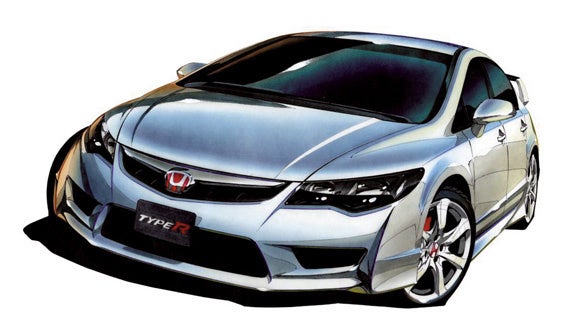 Drivers and reviewers alike routinely praise the Civic for its responsive handling and smooth, stable ride, especially for a compact car. Even over rough roads, the Civic behaves well and maintains good balance in tight curves, thanks in part to unit-body (single-structure) construction, which results in a lighter, more rigid body. A MacPherson strut front suspension and multi-link rear suspension, along with power-assisted rack-and-pinion steering, ensure agility over the road, while power-assisted ventilated disc brakes in front and solid disc brakes in the rear provide plenty of braking power.

The DX trim rides on 15-inch wheels, while the LX and EX trims increase that to 16-inch wheels. However, reviewers would like to see a bit more grip from the 16-inch wheels, especially in tight turns. The Hybrid rides lightweight 15-inch alloy wheels, which provide less resistance and help improve fuel economy.

For a firmer, sport-oriented ride and enhanced handling, the Si Mugen comes equipped with a Twin-Ring Motegi track-tuned suspension and aggressive spring and damper tuning. Mugen-forged 18-inch aluminum wheels also help provide a sportier ride. Some drivers, however, find the Mugen's ride a bit too harsh, especially over rough roads.

Road noise remains one of the Civic's few drawbacks, but for most drivers this doesn't seem to be a problem or too distracting. 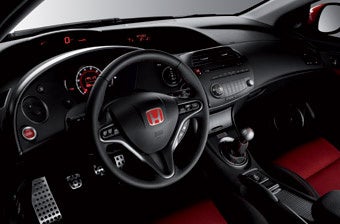 While the EX-L ventures into luxury territory with its leather-trimmed seats, most Civic trims feature comfortable and functional interiors, though without many high-end bells and whistles. However, most note that the Civic has a surprisingly roomy interior for a compact car, as well as an overall high level of fit and finish. Basic features for the DX include power windows, seating for five, and a two-tier instrument panel, which places the speedometer in the driver's line of sight when viewing the road ahead. The LX adds air-conditioning, power door locks, steering-wheel-mounted controls, a center console with storage, a security system, and a four-speaker, 160-watt audio system with a CD player and MP3 capability. The EX and EX-L add a moonroof and an available navigation system.

While drivers and reviewers note that the Civic's standard fabric seats are comfortable, they lack any real support for aggressive cornering. However, they can be manually adjusted, along with the tilt-and-telescoping steering wheel, to make just about any driver comfortable. Tall and long-legged drivers, however, might find the cabin tight, especially the rear seats. Some note the lack of a 60/40-split fold-down rear seat in the DX and LX trims, a feature that typically comes standard in cars of this class.

The Civic offers adequate trunk space (12 cubic feet) for its size and a low outer lip, making it easy to load cargo. In addition, the interior features numerous storage spaces, especially in the upper-level trims. 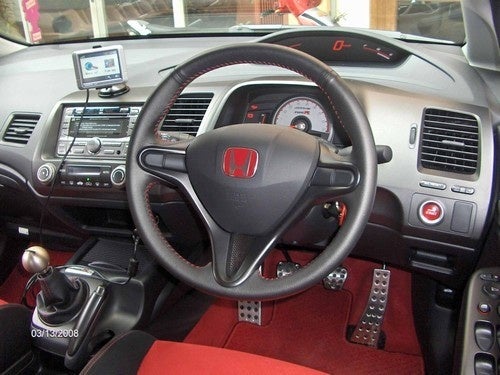 The '08 Civic's many safety features start with its Advanced Compatibility Engineering (ACE) body structure, which has been designed to absorb and disperse crash energy in collisions with vehicles of differing sizes, protecting the occupants. All Civics have a full range of airbags, including dual-stage front airbags and side curtain airbags, as well as standard ABS with Electronic Brake Distribution, which distributes braking force depending on how the vehicle is loaded. Honda does not offer traction or stability control on any Civic with the exception of the Si/Si Mugen trim, which gets Vehicle Stability Assist with traction control as a standard feature.

When rating the Civic's crashworthiness, the Insurance Institute for Highway Safety gave the vehicle "Good" marks (the highest available) across the board, which means the Civic does a good job of protecting occupants from head/neck, chest, foot, and other types of injuries in the event of an accident. However, the National Highway Traffic Safety Institute gave the Civic only four stars (out of five) in protecting the driver during a side-impact crash. For front-impact crashes, however, the Civic earned five stars across the board. 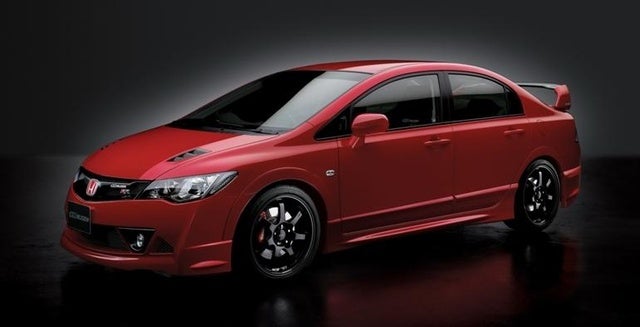 Most drivers note that the Civic delivers exactly what it advertises: an economical, dependable, and comfortable compact car that looks good and handles well. The Civic has many loyal fans who return to it time after time when purchasing a new vehicle. Features such as the two-tier instrument panel, quick steering, ample headroom, good gas mileage, and high level of quality all find favor with drivers. Alternatively, drivers would like to see more options available for the Civic, such as power-adjustable seats, and its sound system, especially the speakers, get nicks from drivers. In addition, some note the Civic Hybrid's gas mileage doesn't deliver as promised (they average around 30 mph, as opposed to the low 40s).

CarGurus drivers echo many of these pros and cons. They give kudos to the Civic for its performance, handling, quality, and gas mileage, and find the Civic comfortable and easy to drive. They like both the exterior and interior design, though some find the interior somewhat spartan, and some note that it veers into a plasticky appearance, though others like the fit and finish of the interior. More than a few note that the Civic sets the benchmark for compact cars. On the downside, some find the interior to be too small for a family, and some find the acceleration slow, especially for the Hybrid. In addition, some drivers find the ride in the Si trim too hard. But a large number of CarGurus drivers can find nothing negative to say about the Civic, which speaks to its overall success.

Users ranked 2008 Honda Civic against other cars which they drove/owned. Each ranking was based on 9 categories. Here is the summary of top rankings.

Have you driven a 2008 Honda Civic?
Rank This Car

I hit an animal on the road and it broke out the windshield and bent the frame that holds the windshield at the bottom on the driver's side. My question is, can this metal piece be replaced? Is the...

I have honda civic 2008, and I have a vibration when the RPM between 1000 to 1500 only. I have replaced the engine & transmission mounting, but there is no any improvements.

Hello, I have a 2008 honda civic.. transmission fluid is leaking from some top shaft, could someone let me know what this part is called.. please see attached picture..

85 views with 1 answer (last answer about a year ago)