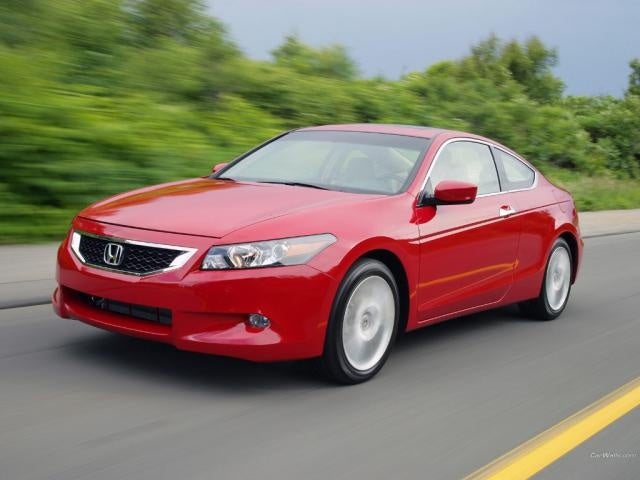 CarGurus has 1,622 nationwide Accord Coupe listings starting at $1,599.

The 2008 Honda Accord Coupe offers distinctive styling, strong performance, a sporty suspension, and a high-quality interior that pushes the envelope for a midsize coupe.

The center console, with its numerous buttons and lights, looks cluttered and confusing according to some drivers and reviewers, who also note that braking could be tighter and higher-end trims get pricey. 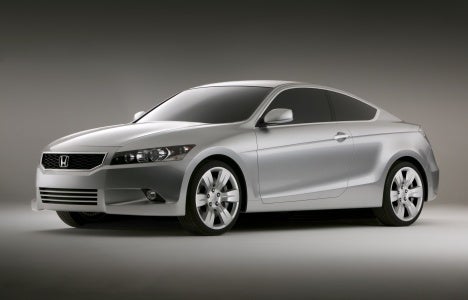 Honda went to great lengths to make the '08 Accord Coupe stand out not only from the competition, but from the Accord Sedan as well, and by all accounts the automaker succeeded, creating a sporty car with precise handling, strong performance, a high level of comfort, and the quality and safety features drivers have come to expect from Honda.

Over the past few years, midsize coupes have come on strong. Nissan stepped up to the plate this year with its new Altima Coupe, which turned more than a few heads, and Honda responded by redesigning its own coupe - a necessary move to remain competitive in the marketplace. Bearing a strong resemblance to the Coupe concept vehicle Honda unveiled at the 2007 Detroit Auto Show, the 2008 Accord Coupe displays a rakish appearance, with a longer nose, a rising line from front to rear, sculpted sides, and a reshaped rear end that looks just a bit too heavy, according to some CarGurus drivers.

Like the Accord Sedan (also redesigned for 2008), the '08 Accord Coupe features some additional sheet metal, since Honda stretched the new Coupe by about 3 inches and widened it by about 1 inch, compared to the previous year's version. In addition, the '08 Coupe stands about a half-inch taller than its predecessor. As a result, the cabin provides an additional 5 cubic feet of space. Rear seat passengers benefit most from this additional space, as rear seat legroom lengthens by about an inch.

It should be noted, however, that the Coupe's overall length checks in at about 3 inches shorter than the Sedan's, and it rides lower as well. The automaker's goal was to make the Coupe a tighter, more aggressive vehicle than the Sedan. That thinking translates to its powerplants as well. The 177-hp four-cylinder engine that drives the entry-level Accord Sedan trims won't be found in the Coupe. Instead, Honda opted for a 190-hp, 2.4-liter i-VTEC engine as the entry-level powerplant, and adds a new 3.5-liter, 268-hp V6 to the Coupe's upper-level trims.

For 2008, the two-door, front-wheel-drive Accord Coupe comes in two basic trims, the LX-S and the EX, although the EX comes in three configurations: the EX, the EX-L, and the EX-L V6, which comes with either a five-speed automatic transmission or a six-speed manual. For an entry-level trim, the LX-S comes well-equipped, with remote keyless entry, side-curtain airbags, power windows and door locks, and 17-inch alloy wheels all part of the standard package. The EX trims add a one-touch power moonroof, premium interior accents, and heated power exterior side mirrors, while the EX-L trims move into luxury territory with leather-trimmed seats, heated front seats, and a leather-wrapped steering wheel.

Honda has geared the new Accord Coupe toward the enthusiast driver who seeks a sport coupe at an affordable price. True enthusiasts will no doubt lean toward the V6 trims, which also come with bigger 18-inch alloy wheels, hood struts, fog lights, chrome dual exhaust pipes, and a tighter turn ratio. 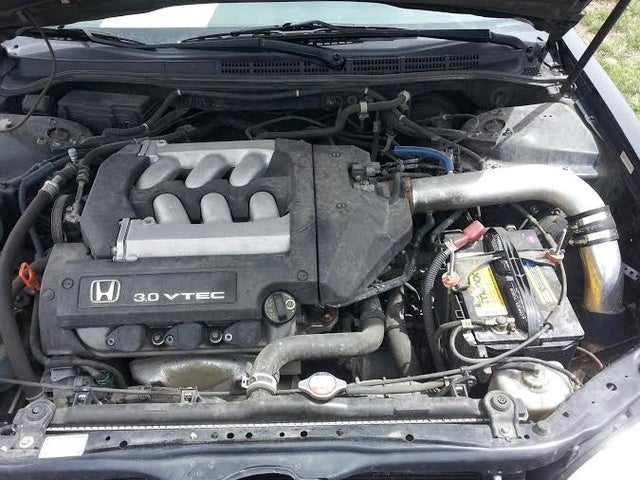 The '08 Coupe features a power boost all around. The entry-level 190-hp four-cylinder, which comes standard on the LX-S, EX, and EX-L trims, offers 24 more hp than the 2007's entry-level engine, while the high-end powerplant, which has been dropped into the EX-L V6 trim, makes the leap all the way to a 268-hp, 3.5-liter, single-overhead-cam i-VTEC V6. This high-end V6 engine features Variable Cylinder Management, which can deactivate two or three of the engine's cylinders as needed to conserve fuel at cruising speeds. When running on three cylinders (for light urban driving), the Coupe's audio system generates out-of-phase sound waves to mask any undesirable engine noise, while active engine mounts keep engine vibration from reaching the cabin, no matter how many cylinders are in operation. Standard engine features across the line include multi-point fuel injection, a Direct Ignition system, and a Drive-by-Wire throttle system, which operates electronically using a sensor, rather than mechanically. 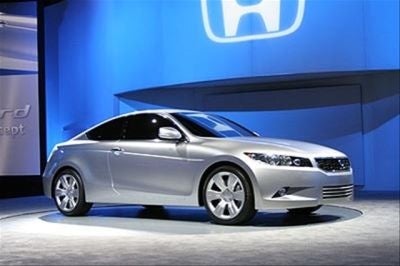 CarGurus drivers consistently tout the Accord Coupe's tight handling and quick steering, which jives with reviewers' statements, who note that the Coupe handles nimbly on rough roads and maintains good balance in tight curves. Drivers also give good marks to the Coupe's quiet cabin and smooth ride, thanks in part to unibody (single-structure) construction, which results in a lighter, more rigid body. In addition, Honda has reduced body roll by positioning the engine and fuel tank lower in the vehicle, which helps improve the overall ride.

The Coupe's suspension has been designed for competent cornering as well as emergency manuvering, with double wishbones in the front and a multilink rear suspension. Power-assisted rack-and-pinion steering with Variable Gear Ratio comes standard.

Some drivers note that, like previous models, the '08 Accord Coupe generates a certain amount of road, tire, and wind noise, especially at highway speeds, but most say it doesn't affect their enjoyment of the vehicle.

The Coupe features power-assisted ventilated disc brakes in the front and solid disc brakes in the rear. Antilock brakes with brake assist and electronic brakeforce distribution come standard. Some reviewers found the brakes solid and responsive, but others note they had to stand a little too hard on the brakes to adequately stop the vehicle. 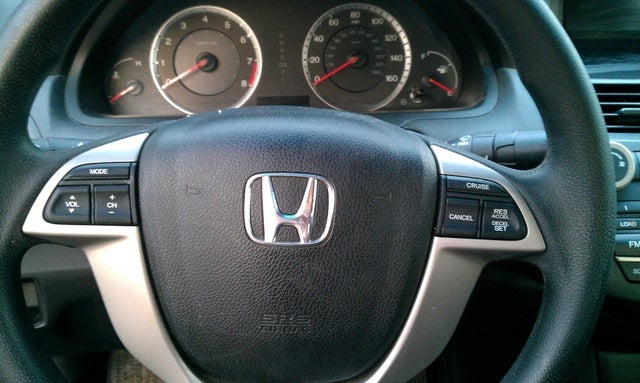 Besides offering more interior space, the '08 Honda Accord Coupe features an updated cabin with a high level of fit and finish, according to drivers and reviewers, some of whom find the Coupe's contoured seats more comfortable than the Nissan Altima's. The LX-S and EX trims feature a manually adjusted driver's seat as standard equipment, while the EX-L trims add an eight-way power-adjustable front seat with power lumbar support. On the passenger's side, a "walk-in" feature tilts the seat-back forward and slides the seat all the way forward, making it easy for rear-seat passengers to get to their seats. A memory function returns the seat to its original position. Due to the Coupe's smaller size, it doesn't offer as much rear-seat room as the Sedan, but passengers in the rear can still make themselves comfortable. The rear seats fold down to provide additional cargo space when needed.

Premium silver or wood-grain accents, as well as blue ambient console lighting, dresses up the interiors of the EX and EX-L trims. The LX-S comes with a six-speaker, 160-watt audio system with a six-disc in-dash CD changer, speed-sensitive volume control, and an MP3 input jack, while the EX and EX-L trims bump that up to a seven-speaker, 270-watt system. The EX-L trims add XM satellite radio. A satellite-linked navigation system with voice recognition and Bluetooth HandsFreeLink can be added as an option on EX-L trims.

Drivers and reviewers find the Coupe's trunk space well-shaped and roomy enough for a car this size. Honda lists cargo space at just under 12 cubic feet, which means it offers slightly less space than the Sedan's trunk. Overall, drivers and reviewers like the new Accord Coupe's cabin, ranking it a step above the interiors of competitors' vehicles. 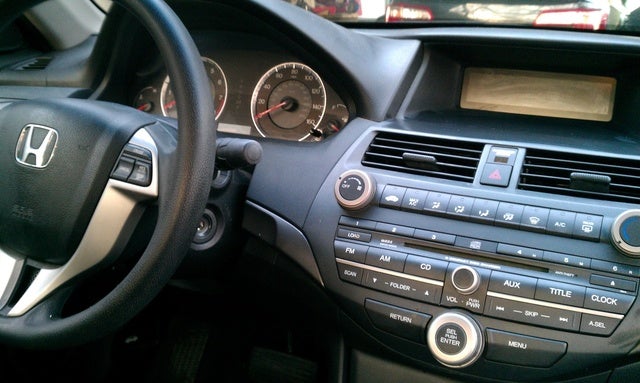 A full range of airbags, including side-impact, front side, and front bags with a new dual-chamber design, protect occupants in the event of a collision. Active front head restraints, also new for 2008, help prevent whiplash injuries. In addition, a Vehicle Stability Assist system with traction control aids the driver in keeping control of the vehicle if tire slippage occurs.

The 2008 Accord Coupe earned a five-star rating (the highest possible) in driver and front-passenger crash tests from the National Highway Traffic Safety Administration. In-floor frame rails, new for 2008, help keep passengers safe in the event of an accident, as does an Advanced Compatibility Engineering body structure that spreads the energy from a crash to a wider area and away from passengers. 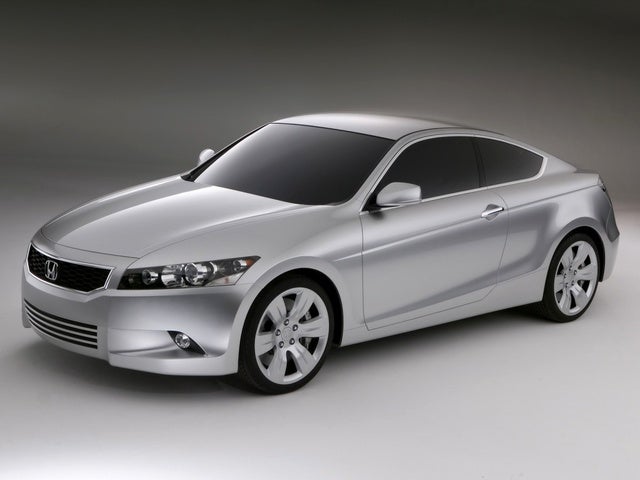 Overall, owners agree that the Accord Coupe's '08 updates push the vehicle in the right direction. In particular, the Coupe's smooth ride, tight handling, good fuel economy, and comfortable interior receive special mentions from drivers. Some note that the Coupe's higher-end trims can be pricey and the Coupe at times feels heavy, but the sports suspension and tight steering ensure maneuverability on all types of roads.

CarGurus drivers echo many of those comments. The EX-L and EX-L V6 trims in particular have garnered high ratings from CarGurus drivers, who note that these higher-end trims have moved close to Mercedes territory. Drivers recommend the V6 trim if your budget allows it. CarGurus drivers rave about the Coupe's design and style, as well as its quality feel. Many prefer the manual transmission over the automatic, noting that the automatic detracts from their overall enjoyment of the car. Others note that the car feels somewhat unbalanced, with too much power and not enough traction. Wind noise remains a downside, according to some drivers. Overall, however, drivers and reviewers alike give the 2008 Honda Accord Coupe high marks in most areas.

What's your take on the 2008 Honda Accord Coupe?

esun2 Don't you know that this model has a huge class action law suit for excessive oil consumption? http://www.carcomplaints.com/Honda/Accord/

Users ranked 2008 Honda Accord Coupe against other cars which they drove/owned. Each ranking was based on 9 categories. Here is the summary of top rankings.

Have you driven a 2008 Honda Accord Coupe?
Rank This Car

Cars compared to 2008 Honda Accord Coupe

CarGurus has 1,622 nationwide Accord Coupe listings starting at $1,599.

Hi there! My left window control switch came loose. Not broken, just loose. Reason I say that is because after feeling that the button switch itself was loose I tried to somehow hook it back in, bu...

Nissan Altima Interchangable With Honda Accord

It's integrated into the fuel pump (inside the gas tank, not external) so I'm just wondering how do I get at it?

75 views with 2 answers (last answer about a year ago)

5 views with 3 answers (last answer about a year ago)

Can I Get Some Engine Light Code Help?

I bought a 08 Honda accord. The engine light goes on and on for either a sensor or the catalytic converter from what the code says. When I fill it up with gas the light tends to go off then back on...

2008 Honda Accord Coupe Trims For Sale